Charges for Purchases Appear on Phone Bill
READ THIS NEXT
Watch: How brands should approach responsible media investing—with OZY Media’s Carlos Watson
Readers of IPC Media's Ideal Home can subscribe via text message. An ad in the October issue's tablet of contents, pictured below, describes how to text to subscribe.
Credit: 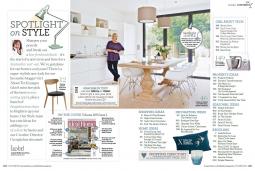 If nothing else, it might cut down on the number of subscription notices -- otherwise known as "blow in" cards -- tucked inside magazines.

The San Francisco-based startup said Thursday that it's partnering with U.K. publisher IPC Media -- owner of titles such as NME, Wallpaper and Horse & Hound (yes, it's a real magazine) -- on a mobile-payment system that allows consumers to subscribe to magazines via text message and charge the subscription to their phone bill.

Here's how it works: Print ads direct would-be subscribers to text a code to a number. They receive a confirmation text in response, directing them to a registration page on a mobile website. The subscription is then charged to the person's phone bill, or deducted from a prepaid balance.

IPC Media captures the subscriber data, such as name, address and email, according to Ray Ramillosa, VP-marketing at Boku.

At the onset, readers can use the text-to-subscribe system for only a handful of the 60 magazines published by IPC Media, which Time Inc. -- the largest magazine publisher in the U.S. and owner of titles like People and Time -- acquired this year for $800 million. And whether mobile users stick around long enough to complete a registration page remains to be seen.

Magazine publishers, which are facing declines in both advertising and subscription revenue, have looked to the web to lessen the cost of acquiring new subscribers. Conde Nast, publisher of glossy titles like Vogue and Vanity Fair, partnered with Amazon last year to streamline the subscription process.

Of course, teaming up with third-party vendors like Amazon or Boku means publishers have to share part of their subscription revenue. Both the mobile provider and Boku extract a fee from the publisher, according to Mr. Ramillosa. He declined to disclose Boku's cut. "Our fee is smaller compared with that of the [mobile] operators," he said.

Mr. Ramillosa declined to say whether Boku is working with any of the major U.S. publishers, such as Conde Nast, Hearst, Time Inc. or Meredith. Both Conde Nast and Time Inc. said they're not working with the company. Hearst and Meredith didn't respond to an Ad Age email by press time.

Unlike magazines in America, where subscriptions comprise the bulk of their circulation, British magazines are generally more reliant on newsstand sales.

"It could work in the U.S.," Mr. Ramillosa said. "It just happens that the initial rollout happened with IPC in the U.K."

The company declined to disclose its revenue figures.