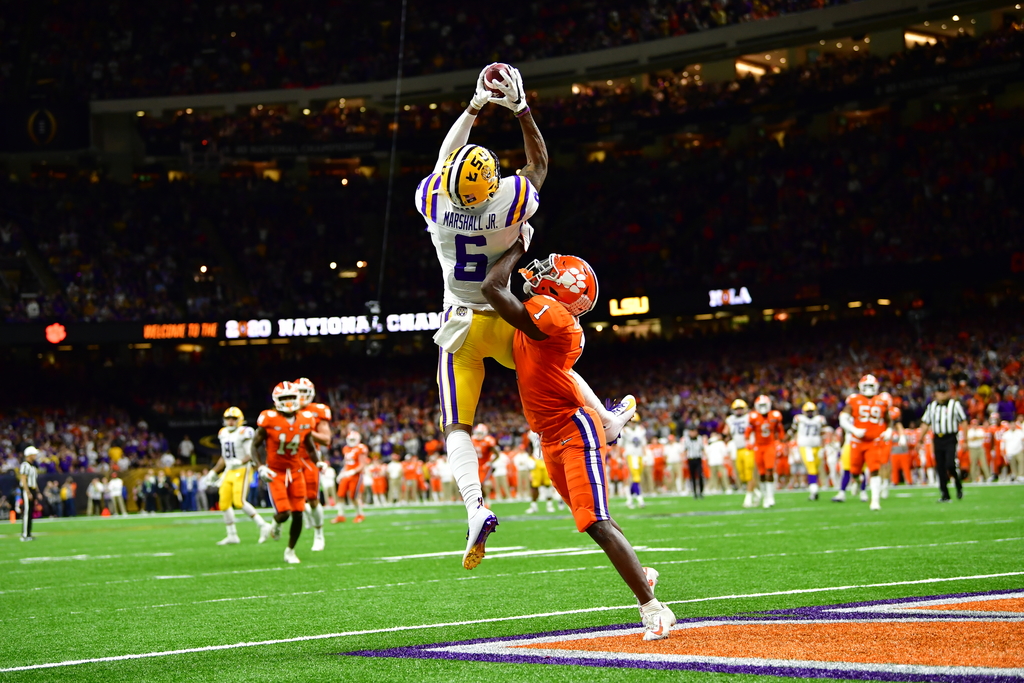 Despite its contracting subscriber base and fears of the impact Clemson fatigue might have on the ratings, ESPN on Monday night managed to draw a huge crowd with its coverage of the sixth College Football Playoff National Championship.

According to Nielsen live-same-day data, LSU’s 42-25 win over defending champs Clemson averaged 25.6 million viewers and a 14.3 household rating via ESPN’s MegaCast, a catchall that includes the main telecast on the flagship network and a pair of specialty offerings via ESPN2 and ESPNU. Deliveries for the title tilt were up 1 percent compared to the 25.3 million viewers who tuned in for Clemson’s year-ago beatdown of Alabama, while the household rating marked a 4 percent improvement.

That Bristol was able to boost its CFP Championship numbers is particularly impressive, given that the network is working with a smaller subscriber base than a year ago. ESPN is currently available in an estimated 84.4 million homes, which represents a loss of around 1.5 million linear TV subs in the last 12 months. (While the 3.5 million customers that have signed on for ESPN+ more than offset the decline on the traditional TV front, the streaming deliveries were not included in last night’s ratings summary.)

The inaugural CFP Championship (Ohio State vs. Oregon, 2015) still boasts the highest deliveries under the present playoff structure, averaging 34.1 million viewers and an 18.2 rating. At the time, ESPN boasted some 94.6 million linear TV subscribers. The all-time record for a national championship game was set during the BCS era, when Texas topped USC in the 2006 Rose Bowl in front of an audience of 35.6 million ABC viewers. The Longhorns’ electrifying 41-38 win drew a 21.7 household rating.

ESPN also managed to overcome the absence of a program with a massive national following (Ohio State and Alabama are just two top-tier programs that come to mind), and the familiarity-breeds-contempt aspect that comes with yet another Clemson appearance. The Tigers have figured in four of the first six CFP Championship battles, a streak that includes three meetings with the Crimson Tide.

LSU’s high-octane offense helped ESPN get the most out of Monday night’s game, however, as quarterback Joe Burrow put on a scoring clinic. The Heisman Trophy-winning senior closed out his collegiate year with 463 passing yards, five touchdown tosses and a score via the ground. As Burrow steered LSU to its first national title since the 2007-08 campaign, he broke the single-season passing touchdown record, finishing with 60. LSU finished the season with a staggering 726 points, the most since the AP Poll era began back in 1936.

Among the most visible advertisers in Monday night’s game were representatives from the original batch of official CFP sponsors: AT&T, Ford, Allstate, Taco Bell, Gatorade, Northwestern Mutual and Dr Pepper. The soft drink brand was the very first backer to sign on with ESPN when the network began selling the CFP inventory back in 2014.

The ratings boost for college football’s big night coincides with a similar tear on the pro football front. Per Nielsen, the first two weekends of NFL playoff action averaged 31.8 million viewers, up 5 percent versus the year-ago 30.4 million, while the 17.7 household rating is up 3 percent.

Of those first eight postseason broadcasts, last Sunday’s games were the biggest draws. CBS’s afternoon coverage of the frankly schizoid Texans-Chiefs marvel averaged 35.4 million viewers and a 20.3 rating, making it highest rated AFC Divisional game since 2016 and the most-watched since 2017. After trailing at home 24-0, Patrick Mahomes and the Chiefs served up six unanswered touchdowns on the way to a convincing 51-31 victory. As we’ve seen before, high-scoring games are often the key to lighting up the Nielsen boxes.

In primetime, Fox’s coverage of the 28-23 Seahawks-Packers skirmish averaged a playoff-high 37.2 million viewers and a 20.0 rating. To date, five of the eight NFL playoff broadcasts have improved upon their year-ago deliveries.

Looking ahead to Championship Sunday, CBS enters the early game looking to keep its hot streak going with yet another display of offensive firepower. CBS’s AFC Championship Game has out-delivered the NFC tilt in each of the last four years; given the early starting time and the absence of Tom Brady and the Patriots—this will be the first AFC title bout without New England since 2011—that streak likely ends this weekend.

While Tennessee is as fun to watch as any team in the NFL (running back Derrick Henry is a souped-up wrecking ball, rushing for 377 yards on 64 carries in his two postseason appearances), the Titans remain a somewhat unknown commodity outside of Nashville. Having been afforded a single national TV window,Tennessee in the regular season were the third least-watched franchise on the books, averaging just 6.32 million viewers against the lowly Jaguars on NFL Network’s “Thursday Night Football.”

Fox is perhaps in a more enviable position, as the big-reach Green Bay Packers will appear in the NFC’s primetime window alongside the San Francisco 49ers. The last time the Packers played in the late window of the NFC Championship Game was in 2008, when Fox drew 53.9 million viewers and a 29.0 rating. While the Packers-Niners showdown may not scare up a larger audience (representing the nation’s largest media market, the New York Giants won that game in overtime by a 23-20 margin), it is expected to deliver the most commercial impressions of 2020—at least until Super Bowl LIV rolls around on Feb. 2.