How 'Bout Them Cowboys: Dallas Sets Ratings Record for Fox 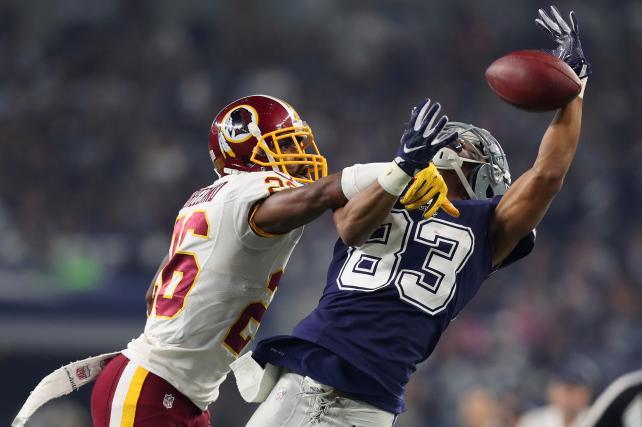 Bashaud Breeland #26 of the Washington Redskins defends a pass to Terrance Williams #83 of the Dallas Cowboys during the fourth quarter of their game at AT&T Stadium on November 24, 2016 in Arlington, Texas.
Credit: Tom Pennington/Getty Images

It may be a burr in the saddle for anyone who is not a fan of the Dallas Cowboys, but it's no accident that the sobriquet "America's Team" has stuck for the better part of 40 seasons. Love 'em or loathe 'em (and the vast majority of football enthusiasts fall into the latter camp), Jerry Jones' NFL franchise is the biggest draw on TV -- so much so that they've proven to be the exception to the rule in a season marred by substantial ratings deflation.

Across the nation, as an ocean of gravy began to negotiate its way past our collective blood-brain barrier, Americans on Thanksgiving Day huddled around their sets to bear witness to the latest chapter in the half-century rivalry between Dallas and Washington. The game, which was punctuated by five fourth-quarter touchdown drives, did not disappoint, and the ratings surpassed even Fox's lofty expectations.

According to Nielsen live-plus-same-day data, the Cowboys' 31-26 victory delivered a staggering 35.1 million viewers and a 14.5 household rating, making it the most-watched regular-season contest on Fox since the network first began broadcasting NFL games back in 1994. The TV turnout for Dallas' Turkey Day triumph fell just shy of the all-time record for an in-season NFL broadcast; the 1995 Thanksgiving tilt between the Cowboys and Kansas City Chiefs drew 35.7 million viewers on NBC.

To put Thursday's deliveries in perspective, those 35.1 million viewers eclipsed the turnout for each of the 17 nights of NBC's Rio Olympics coverage -- with an average tally of 33.4 million viewers, Night 4 was the biggest draw of the Summer Games -- and beat out ABC's broadcast of Game 7 of the 2016 NBA Finals (31 million). The Washington-Dallas game also made short work of ESPN's Jan. 11 College Football Playoff National Championship tilt (25.7 million viewers), and edged ABC's presentation of the 88th Academy Awards (34.3 million). Post-season NFL games aside, the year's only marquee TV event to deliver a larger audience than the Tryptophan Bowl was Game 7 of Fox's World Series coverage, an historic affair that averaged a 25-year high 40 million viewers.

Fox's jaw-dropping holiday numbers helped set another benchmark, as the network now boasts the only national broadcast window to notch a bigger audience than it did during the year-ago period. Per Nielsen, Fox's 4:20 p.m. Sunday afternoon games and the Thanksgiving window have averaged 27.5 million viewers, up 3% versus the 26.7 million viewers who tuned in for the analogous span in 2015. Meanwhile, Fox's 14.7 household rating marks a mere 1% decline compared to the year-ago 14.9.

Even the most cursory glance at the season's top NFL broadcasts demonstrates the outsized impact Dallas has on national TV ratings. Through Week 11, Fox can lay claim to four of the five most-watched NFL broadcasts of 2016; it is no coincidence that each of these match-ups featured the high-flying Cowboys:

Through the first eight of its league-high 11 scheduled national windows (the NFL average is 4.2 games), the 10-1 Cowboys are averaging a whopping 25.3 million viewers and a 13.7 household rating, making them football's top TV draw by an all-but insurmountable margin. (Runner-up New England is averaging 21.2 million viewers and a 12.3 household rating through its first four national TV appearances.) Dallas' remaining coast-to-coast slots are all prime-time contests; these include a Dec. 1 "Thursday Night Football" battle with the Vikings, a Dec. 11 "Sunday Night Football" duel with NFC East rivals New York and a Boxing Day "Monday Night Football" meet-up with Detroit.

Speaking of the Lions, CBS scared up its biggest NFL audience of the season with its coverage of the early Thanksgiving Day game. Detroit's last-second win over the visiting Vikings scared up 27.6 million viewers and a 13.0 household rating, making it the fourth most-watched game of the 2016 NFL campaign.

The Lions' seventh come-from-behind victory helped boost the overall deliveries for CBS' Sunday afternoon games. When blended with its Thanksgiving numbers, the network's 4:20 p.m. broadcasts are averaging 22.7 million viewers and a 12.6 household rating, making it the No. 2 national NFL window behind the Fox package.

While CBS should retain bragging rights for its stewardship of the second most popular NFL showcase, its window isn't nearly as stable as Fox's. Season-to-date, CBS' big national package is down 12% in overall viewers and 13% in household ratings. That said, the Sunday afternoon games are still in much better shape than the various prime-time slates, which are down as much as 20%.

The NFL's nighttime woes didn't take a holiday break, as NBC's coverage of the Pittsburgh-Indianapolis Turkey Day capper averaged 20.9 million viewers, down 25% compared with last year's far more competitive Bears-Packers scuffle. (The Steelers lit up the [Andrew] Luck-less Colts by a score of 28-7, whereas Chicago prevailed in the year-ago NFC North showdown by a four-point margin.) The NBC broadcast now stands as the least-watched Thanksgiving game since 2012, when the Patriots humiliated the Jets in a 49-19 Butt Fumble rout that drew 19.2 million viewers.

With an average draw of 20.8 million viewers over the course of six national TV windows, Pittsburgh presently stands as the No. 4 most-watched NFL franchise behind Dallas, Washinton (22.3 million) and New England (21.2 million).

Season-to-date, NBC's primetime pigskin package is averaging 19.7 million viewers, down 15% versus its year-ago draw (23.2 million). The Peacock closes out its regular-season NFL coverage with a trio of interdivisional grudge matches, all of which are likely to have playoff implications. Dallas hosts the Giants on Dec. 11, the Steelers travel to Cincinnati on Dec. 18 and on Christmas night in Kansas City, the Broncos and Chiefs will deck the halls with boughs of smashmouth football.

While the confluence of the Cowboys and America's biggest afternoon of communal TV viewing is a reliable ratings driver, broader viewership trends suggest that the NFL of late is enjoying a more widespread reversal of fortune. Since the soul-sapping presidential election cycle ground to a halt, NFL ratings have been on the upswing. Whereas aggregate overnight ratings were down 12% in Weeks 1-9, the two weeks after Election Day were off just 5% compared with the year-ago period. Make of that what you will.

As expected, automakers were the most visible advertisers during last Thursday's NFL broadcasts. According to iSpot.tv estimates, car brands such as Ford, Chevrolet, Volkswagen, Audi, Honda and Cadillac accounted for nearly 20% of the ad dollars generated by Thanksgiving football, or $29.4 million of a total haul of $156 million. Other key categories included wireless ($10.2 million) and retail ($9.56 million).