Brands Test and Taste Their Way Into Consumers' Kitchens

Inside the Test Kitchens at Kraft, Saveur and Blue Apron
READ THIS NEXT
Yet another TV consortium forms to tackle addressable advertising 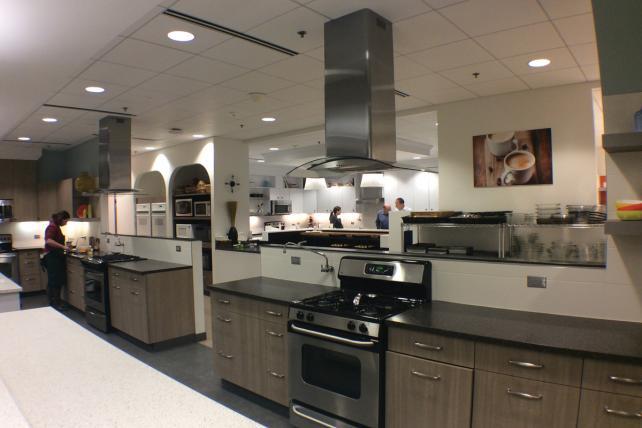 Kraft's test kitchen at its headquarters near Chicago.
Credit: Kraft

It's a Friday afternnon in March and the smell of hot processed cheese is filling the Kraft test kitchen.

Robin Ross, director of culinary at Kraft, has just given me a tour of the facility, which lies at the heart of the company's headquarters in suburban Chicago. Now she wants us to eat the slow-cooked beef chili the kitchen has made for my visit, but the pungent aroma of cheese burbling in a nearby oven, a smell that will cling to my clothes for hours, is making me vaguely nauseous.

A bowl of the chili is put before me, with neon orange shredded cheese sprinkled on top.

And the chili tastes -- wholesome, like something mom would make. I finish the bowl.

"We're not a gourmet test kitchen," Ms. Ross tells me. The Kraft customer "has to get food on the table."

The visit marked the start of a three-month test-kitchen tour that would take me from Illinois to the offices of Saveur magazine in Manhattan to a Brooklyn apartment where startup Blue Apron perfects its recipes.

At a time when Americans have come to fetishize eating out -- photographing meals, sharing the images on social media and planning vacations around restaurants -- corporations, media brands and startups are cranking out recipes in an effort to encourage people to eat in. And there's a lot of money to be made selling food for the home. Americans will spend more than $900 billion at the grocery store this year, according to market research firm IRI.

Kraft's test kitchen, which actually contains eight kitchens, mimics the average U.S. home. Each has two ranges -- gas and electric -- because Americans are split 50-50 on the type they own, according to Ms. Ross. There's also a wall of microwaves representing a variety of wattages, as well as a walk-in pantry stocked with the most common products in American homes. Every three or four years, Kraft conducts a pantry study to refresh the products.

The whole point of the operation is to create recipes that anyone can make, with, of course, a Kraft product or two. Ms. Ross and her staff of 14 chefs, dieticians, food scientists and technicians create and test recipes that are posted to the Kraft website and published in cookbooks and Kraft's magazine Food and Family. They also work closely with Kraft's marketers and digital-media teams to identify culinary trends, in the name of selling more product.

A month later at the Saveur office in Manhattan, Farideh Sadeghin, the magazine's test kitchen director, is teaching me how to make a brown rice salad with avocado. My job is to make the teriyaki sauce.

The recipe is something half remembered from Ms. Sadeghin's days as a cook in New Zealand and, later, as a private chef. She'll publish the final recipe as part of her weekly column on Saveur.com. 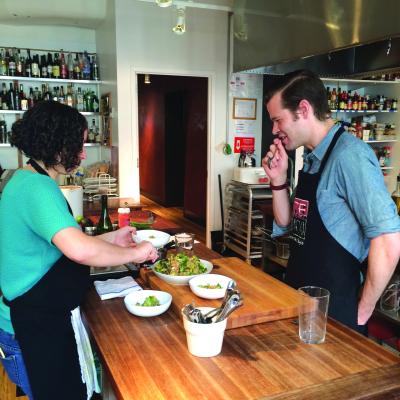 Saveur's Farideh Sadeghin and the author tasting a brown rice salad with avocado.

Saveur's test kitchen is not as dramatic as the kitchens of Bon Appétit, Good Housekeeping or Food Network, but the space is cozy. It nudges up against the cubicle farm where editors produce Saveur -- they often drop in to graze.

Ms. Sadeghin, her assistant cook and a rotating cast of freelance chefs pore over recipes to ensure they're up to snuff before going in the magazine and online. The kitchen also hosts celebrity chefs who star in videos for Saveur.com. "Do the celebrity chefs ever intimidate you?" I ask Ms. Sadeghin. She shakes her head. "No, because they're in my kitchen," she says.

The salad takes about 20 minutes to make. But before we can dive in, Ms. Sadeghin takes it to a window where early afternoon sunlight pours in. She arranges the dish and starts photographing. Ten minutes later, Ms. Sadeghin, her assistant cook and I hover over the bowl and devour the salad. It's delicious. "I almost never eat dinner because I'm so full when I leave work," she says.

Blue Apron is all about people eating dinner. The New York-based startup delivers recipes and their ingredients to people's homes. There's a two-person plan and a family plan. The latter will set you back about $140 a week for four meals that serve four people.

The test kitchen, which I visited in late April, is inside a studio apartment in the shadow of the Williamsburg Bridge in Brooklyn. Like Kraft's, it's meant to mimic the kitchens of its customers. "We don't want it to be tricked out," one of the half-dozen Blue Apron staffers at the test kitchen says. (Blue Apron headquarters is in Manhattan.) 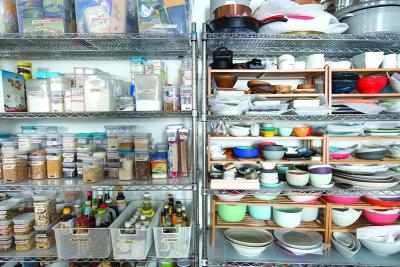 Blue Apron's pantry inside its test kitchen in Brooklyn.

Blue Apron won't repeat a recipe in a year and gets most ingredients directly from farms, which means the dishes are more or less seasonal. And that keeps Blue Apron Culinary Manager Timothy Kemp up at night thinking about the various recipe combinations.

"It's like a fun little game of Tetris," says Mr. Kemp, who's worked at a number of high-end restaurants, including Per Se, Gramercy Tavern and Le Cirque.

The recipe he's finishing when I arrive won't appear on a Blue Apron menu for months. It's chicken thighs over a salad with grains. Mr. Kemp tops it with some cheese and cilantro. But before we can dig in, the staff needs to photograph it, which they do using natural light from a window. They send the photo to headquarters for approval, then we wait. And wait.

Mr. Kemp finally makes the executive decision for us to eat, even without the photo approved. It's cold by this point, but still very good.