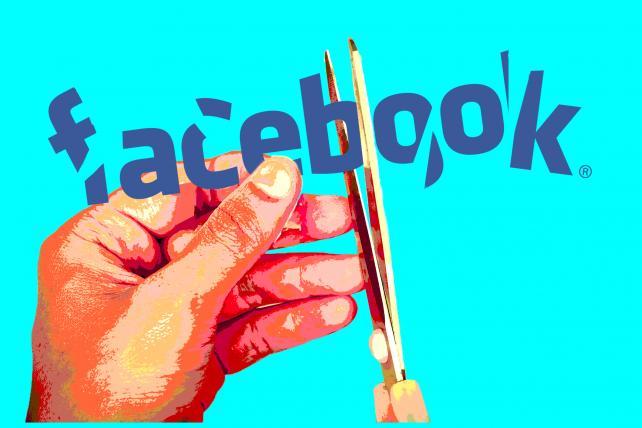 The only solution to "the Facebook problem," a Republican political campaign consultant told me in D.C. last month, is to break up Facebook.

It's simply gotten too large, too dominant, too "scary powerful," he said. Of course, he and his clients still continue to use it, and he's not willing to publicly attach his name to the idea that the social network needs to be dismantled because, well, he still needs to play ball with it.

The idea of breaking up Facebook was echoed last week in Europe, as Mark Zuckerberg continued his ongoing apology tour in the aftermath of the Cambridge Analytica scandal—this time in Brussels, where European lawmakers grilled the Facebook CEO.

"It is time to discuss breaking up Facebook's monopoly," Germany's Manfred Weber, leader of the conservative European People's Party, told Zuckerberg, "because it's already too much power in only one hand."

Zuckerberg didn't get great marks for addressing the concerns of Weber and other EU politicians.

Here's one sample Zuck diversion: "We exist in a very competitive space where people use a lot of different tools for communication. From where I sit, it feels like there are new competitors coming up every day." See? Everything's fine!

The proceedings made clear that the notion of a Facebook breakup has rising currency in Europe. And I believe we'll be seeing more and more politicians stateside also embracing the idea. Consider, for starters, the campaign strategist above, whispering in the ears of Republican candidates. Or the newly formed Freedom From Facebook coalition leveraging its left-leaning participants, including MoveOn and Citizens Against Monopoly.

The political climate and the moment are right for it in the U.S.—Republican control of Congress and the White House notwithstanding. Last fall, in an editorial in The American Conservative headlined "Time for a Conservative Anti-Monopoly Movement" (subhead: "Amazon, Facebook and Google: The new robber barons?"), Daniel Kishi wrote, "Although the modern Republican Party stands accused of cozying up with corporate interests, the history of conservative thought has a rich intellectual tradition of being skeptical—if not hostile—towards economic consolidation."

It's worth noting that the most epic breakup in American history—that of AT&T and the Bell System—was initiated in 1974 under a Republican president (Nixon) and was ultimately carried out in 1984 during another Republican administration (Reagan's).

Of course, there are huge differences between 1974/1984 and 2018—among them the fact that back then we had a nominally functional government in D.C.

Plus, as Kimberly A. Zarkin and Michael J. Zarkin point out in their book "The Federal Communications Commission: Front Line in the Culture and Regulation Wars," the Nixon administration's Justice Department went after AT&T only because it was convinced it could demonstrate that the company was "actively engaging in anticompetitive behavior"—in particular, refusing to interconnect its network with those of competitors such as MCI. It's hard to tease out what the anticompetitive parallel would be for Facebook. "You're just too damn big" is not enough to fuel an antitrust action.

So what happens next?

In D.C., I predict absolutely nothing of real impact regarding Facebook.

Instead, the Europeans will graciously do all the work for us dysfunctional Americans and our inept, clueless politicians.

As Cathrin Schaer wrote last week on the German financial news website Handelsblatt Global, "The EU has been more successful in the past than the U.S. at taking down tech behemoths, thanks to laws that make it easier to prove antitrust violations." She cites as evidence European Commission wins against Apple, Microsoft and IBM, along with a fine of 2.4 billion euros (about $2.7 billion) levied against Google last year. "Zuck should worry," she added.

In one important regard, Zuckerberg's presence in Europe last week was exquisitely ill-timed: He defended Facebook there while, back home, all of our inboxes were getting clogged with "We're updating our privacy policy" notifications as websites, domestic and foreign, scrambled to comply with the new General Data Protection Regulation out of Europe.

American politicians and regulators couldn't be bothered to try to meaningfully improve data collection and privacy rules, but because the web is, well, worldwide, the GDPR still has a major impact on Americans.

Zuckerberg has talked repeatedly about his desire for Facebook to be "a global community that works for everyone." And sure, yeah, a borderless techno-utopia sounds good in theory—until the global community wakes up and decides to work against you.