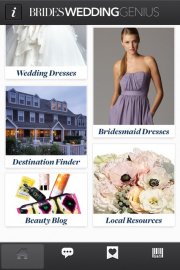 The magazine said consumers using the app's new feature, Brides Against Counterfeiting, can hold their smartphones over the website of a participating retailer or manufacturer to view an AuthentiGuard Prism, which is a symbol embedded with code. That will tell consumers whether the website is an authorized retailer.

Counterfeiting, which has long plagued the fashion and design industries, has worsened considerably due to the internet. Sales from counterfeit items costs American businesses $250 billion annually, according to a report in Accessories Magazine.

The bridal industry, meanwhile, has lost hundreds of millions of dollars as a result of these illicit activities, according to a report this year in The New York Times. Roughly 600,000 fake wedding dresses are bought online each year, the Times said.

"Counterfeiters cost millions of dollars in lost sales and damaged brand reputation as they introduce potentially harmful and lower quality products to consumers," said Robert Bzdick, president of DSS, the company behind the AuthentiGuard Prism, in a press release.

The technology added to Brides' Wedding Genius is meant to help brides properly identify fake products, according to Brides VP-publisher Michelle Myers. "This initiative will also protect our advertisers by pinpointing and reporting counterfeiters who are illegally marketing brand names online," she said in a statement.

The brand hopes it will simultaneously enchance its app in the eyes of brides and wedding planners. Last year, the annual Real Weddings Survey cited mobile as a top wedding trend in 2011. Nearly three out of five brides use smartphones for wedding planning, the survey indicated. That number has surely increased since then, as an influx of smartphone apps aimed at brides have come online.

The 79-year-old Brides magazine has sought to reassert itself in the digital space at a time when many bridal advertisers have shifted their budgets into digital media to appeal to millennials. Conde Nast recently reduced the magazine's frequency to 6 issues a year from 12. Ad pages at Brides have fallen 30.4% through November compared with the same period last year, when the magazine was still published monthly, according to Media Information Newsletter.

In the last year, Brides has worked with Randi Zuckerberg, sister of Facebook founder Mark Zuckerberg and a former exec at the company, to plan and pay for a $1 million wedding for one couple that was aired live on Facebook. A second iteration is on tap, the magazine said. Conde Nast Artistic Director Anna Wintour began consulting on the magazine's editorial content this year.