NEW YORK (AdAge.com) -- After more than a decade as perhaps the Food Network's most ubiquitous TV chef, Emeril Lagasse is kicking his media empire up a notch.

For starters, there's his relationship with Martha Stewart Living Omnimedia, which signed the Emeril brand to a 10-year contract worth $50 million in February. He's also distancing himself from the Food Network with the recent shuttering of his longtime cooking show, "Emeril Live," which helped launch his signature exclamation, "Bam!" into the pop-culture lexicon. 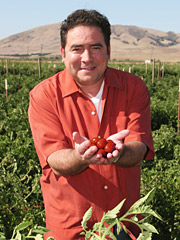 Amid staying on top of his 10 restaurants and myriad cookware-licensing deals, Mr. Lagasse occasionally plays the part of corporate spokesman. He recently appeared alongside Ms. Stewart in a TV ad for Macy's and shot a campaign for Procter & Gamble's Crest. Ad Age caught up with the celebrity chef on the set of a Crest commercial shoot.

Advertising Age: You must get approached by marketers all the time to endorse products. How do you stay authentic?

Emeril Lagasse: I have a lot of opportunities to do these things, and I rarely do them. ... But for me it's not only about selling the product; it's really about believing in what it's all about. I've had a lot of different ones all over the board come to me from fast food to, you name it, stomach medicine. That's not really what I'm really about. [With Crest], I've used the product, I've been using it for years, so it's easy for me. I've been a part of the campaign for about four years now. It's been nice to see how it's gradually kept building and building. It could be bigger than "Bam!" So we'll so what happens.

Ad Age: You're also part of Discovery's new partnership with Whole Foods, which is the host of your series on Planet Green. To borrow a word, how "organic" was going green for you?

Mr. Lagasse: What a lot of people don't realize about Emeril is that, with "Emeril Live" in particular, there's a lot of bantering about pork fat and butter and stuff, but really, truly, for over 30 years, I've been growing organic foods. I was using them when people didn't know what organic was or how to spell organic, especially for my restaurants. It's no stretch for me at all because I've been in that environment for so long. So it's really important to me ... turning the average person on to sustainable growing or organically grown, pesticide-free foods.

Ad Age: How did you come to be Martha's first sub-brand?

Mr. Lagasse: Martha and I have been friends with tremendous respect for each other for a long, long time. ... I really wasn't shopping my company, it just sort of happened that the chairman of MSLO's grandchildren, who were huge fans of "Emeril Live," ended up coming to a show. We ended up talking, Martha and I ended up speaking. She was looking for a platform to really take it to another level. The Martha brand will stay the Martha brand, and the Emeril brand will stay the Emeril brand. We will help each other and certainly add whatever value we can to each other, but we will never mix the brands up.

Ad Age: But clearly you've found some synergy, such as your new monthly column for Martha's Everyday Food magazine. How has her brand started to influence your already crazed work ethic?

Mr. Lagasse: You know, I work a lot, and I'm trying to figure out this monster here -- and it is a monster. Martha has 850 employees; I have five. So it's not that I want to have 850, because we're lean and mean and very efficient. We're looking at avenues to expand in that mean something to the brand and mean something to all of us. We're not going to do something just to do something.

Ad Age: What's your next step?

Mr. Lagasse: I think the next step is figuring out which channels to play in. For me, my focus is what my existing partners and I have a really incredible relationship with and a serious obligation to, whether it's cutlery or my farm or my food products. For me it's a matter of going back and revisiting those relationships and making them even better, doing more business and obviously being more profitable, as opposed to going down the street and trying to find 10 new entities we can jump on the bandwagon with. I consider myself very loyal, and I really want to reassure the relationships we've built in the licensing world.