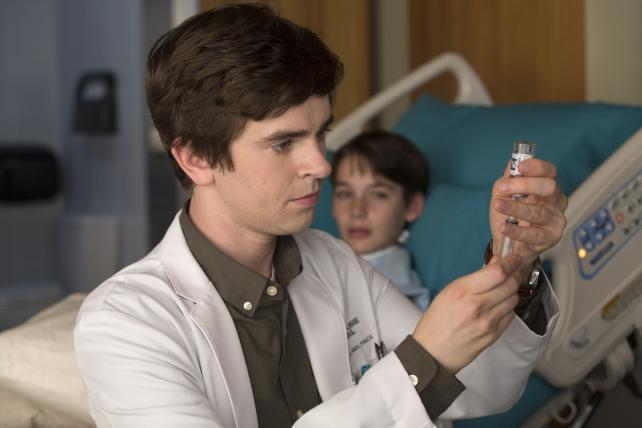 We're a month into the 2017-18 broadcast season, and while the deterioration of live viewing continues to put the screws to the commercial deliveries, there are a handful of outlier programs that belie the notion that network TV is in its death throes.

While the average delivery of viewers in the sought-after 18-to-49 demo is down 15 percent compared to the year-ago period, shows like NBC's "This Is Us" and ABC's new medical drama "The Good Doctor" have flipped the script on the ratings narrative. Last season's lone unequivocal breakout hit, "This Is Us" through the first four episodes of its sophomore run is averaging 11.4 million viewers and a 3.2 live-plus-same-day rating, which works out to 4.12 million adults 18 to 49. That marks a 19 percent improvement over the show's year-ago demo deliveries and establishes "This Is Us" as broadcast TV's highest-rated drama series.

If year-over-year growth is almost unheard of in today's fragmented media universe -- even Fox's "Empire," which in the winter of 2015 enjoyed a rare string of weekly ratings gains, experienced year-to-year declines in its sophomore season -- NBC's enthusiasm for "This Is Us" has been contagious. According to media buyer estimates, the average upfront unit cost for a 30-second commercial in the show was just shy of $400,000 a pop, a rate hike of 45 percent compared to the $272,000 a half-minute of air-time fetched during the inaugural season.

Given the lift "This Is Us" last season saw in the currency data, advertisers such as T.J. Maxx, Universal Pictures and Chevrolet that have been big backers of the show are likely to get even more bang for their marketing buck. Assuming that a week of time-shifted viewing will add another seven-tenths of a ratings point to the "This Is Us" live-same average, the show is currently averaging north of 5 million members of the target demo in the C7 currency. That brings the average cost of reaching 1,000 people in the 18-to-49 set to $78.46, down from the $95.62 CPM that would be the price of admission to reach the live-same-day viewers.

As "This Is Us" continues to be the talk of both Madison Avenue and the office water cooler, it is by no means the only drama to draw a crowd thus far in the young season. ABC appears to have solved one of its trickier time slot dilemmas with "The Good Doctor," which is currently drawing a demo that is two-and-a-half times the size of that which tuned in for last season's Monday 10 p.m. occupant "Conviction." Through its first four episodes, "The Good Doctor" is averaging a 2.1 in the demo, or around 2.71 million adults 18 to 49. By comparison, the first four hours of "Conviction" eked out a meager 0.8 rating, good for around 1 million members of the sub-50 crowd.

With an average unit cost of $125,678 per 30-second spot, "The Good Doctor" is also a hell of a bargain, as that translates to a $46.42 CPM. (Naturally, the rates buyers are paying in the scatter market are considerably higher than the prices negotiated during the summer upfront bazaar.)

The early success of "The Good Doctor" flies in the face of the great disappearing act that is the 10 p.m. TV audience. Through Oct. 19, the final hour of scripted prime is now averaging a 1.1 in the demo, down 19 percent from the year-ago draw. Long overshadowed by the DVR and cable, the 10 p.m. broadcast hour is particularly vulnerable at the beginning and middle of the Nielsen week, as the Sunday slot is down 40 percent to a 0.6 rating, while Wednesday night's hour is off 37 percent to a 1.1 in the demo.

By far the weakest show on the broadcast slate is ABC's new Sunday night drama, "Ten Days in the Valley." The Kyra Sedgwick crime saga is averaging 2.88 million viewers and a 0.4 in the demo, and is the lowest-rated scripted TV series on any of the Big Four networks. (The ratings for the straight-to-series pickup are so poor that "Ten Days" is presently being topped in the demo by no fewer than five shows on the CW. Should ABC choose to honor the show's 10-episode order, the network is on the hook for another seven hours of historically low deliveries.)

Dramas aren't the only programs to find an audience this season, as two sitcoms have put up big numbers in the early going. While the ratings for CBS's "Big Bang Theory" prequel/spinoff "Young Sheldon" come front-loaded with an asterisk (the show has aired only once, and outside of its regular time slot), it's hard to argue with the results of that special preview. Leading out of its comedic precursor on Monday, Sept. 25, "Young Sheldon" bowed to a massive 17.2 million viewers and a 5.5 rating in CBS's target demo. Those 6.64 million adults 25-54 who tuned in for the show's opening salvo represents a retention of 95 percent of the 7 million members of the demo who'd been watching "Big Bang" in the previous half-hour.

Another comedy that started strong was NBC's reboot of "Will & Grace." After bowing four weeks ago to 10.2 million live-same-day viewers (of whom some 3.87 million were adults 18-49), the show is now averaging 7.69 million viewers and a 2.1 in the demo, up 62 percent compared to last season's time-slot occupant.

All told, four new (or newfangled) series are presently putting up bigger deliveries than the shows they replaced. Along with "The Good Doctor" and the sorta-kinda newish "Will & Grace," Fox's "The Gifted" is up 18 percent in the demo compared to "Lucifer," while CBS's freshman comedy "Me, Myself & I" has improved on last season's "The Odd Couple" by one-tenth of a ratings point.

Among the handful of legacy series that are up year-over year are "This Is Us," "Riverdale," "60 Minutes," "Star" and "Great News." "Bob's Burgers," "Shark Tank," "Supernatural" and "Crazy Ex-Girlfriend" are flat, and literally everything else on the broadcast menu is down versus the year-ago period.

Season-to-date, some of the most precipitous declines have been charted by "Empire" (down 47 percent to a 2.0 in live-same-day), "Speechless" (down 37 percent), "Kevin Can Wait" (down 32 percent) and "Chicago Fire" (down 25 percent). By comparison, the 7 percent dip for "Sunday Night Football" seems more like a rounding error.