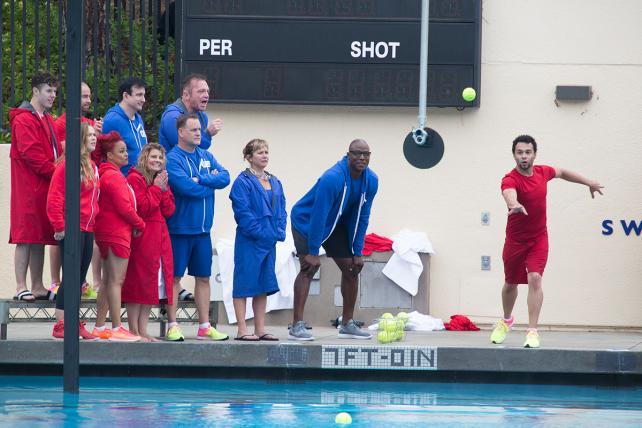 As broadcast TV's brief boom in scripted summer shows fades into history, competition fare like a revived 'Battle of the Network Stars' is filling the schedule.
Credit: ABC/Kelsey McNeal

Competition series and a boomlet of retro game show revivals are being tasked with much of the heavy lifting this summer at the broadcast networks, which are looking to rebound from a soft spring.

The Big Four networks saw their deliveries of adults 18 to 49 in May fall 13% from a year earlier, according to Nielsen C3 ratings. ABC, CBS, NBC and Fox notching an aggregate 4.1 rating in primetime, down from a 4.7 C3 rating, which offers a rough estimate of commercial impressions in live and time-shifted viewing within three days of a program's first showing.

While May marks the end of broadcast's 35-week regular-season schedule, the month's usual barrage of finales, cliffhangers and Very Special Episodes did nothing to boost the networks' flagging ratings. The game-changing final episode of season 10 of "The Big Bang Theory" (which happens to be the highest-rated scripted show on network TV) delivered 20% fewer adults in CBS's target 25-to-54 demographic than did the season 9 closer, while the conclusion of the third chapter of "Empire" was down 39% in Fox's 18-to-49 target.

If the 2016-17 season ended with a whimper, the summer session has shown signs of life in the early going. Now in its twelfth season, NBC's indefatigable "America's Got Talent" is currently averaging 12.5 million live-plus-same-day viewers and a 2.7 in the demo, which marks a net gain of nearly 1 million viewers per episode versus a year ago and an 8% lift in adults under 50.

"America's Got Talent" also has helped launch a new hit in the hoofer-competition series "World of Dance." Leading out of "AGT" in the Tuesday 10 p.m. slot, the Jennifer Lopez vehicle is averaging 8.72 million viewers and a 2.1 in the demo, which works out to around 2.69 million adults 18 to 49. By comparison, last summer's time slot occupant, the variety show "Maya & Marty," averaged just 5.34 million viewers and a 1.3 rating over the course of its first three episodes.

NBC's other established summer hit, "American Ninja Warrior," fell 18% in its June 12 opener, although that reversal is likely a function of the show premiering opposite Game 5 of the 2017 NBA Finals on ABC. "Ninja" was last summer's third highest-rated network series, trailing only "AGT" and ABC's "The Bachelorette."

ABC has one other summer drama in the hopper with "Somewhere Between," an adaptation of a Korean mystery series that is set to replace "Still Star-Crossed" on Monday, July 24. That said, nostalgic game show reboots will make up the bulk of ABC's programming hours, as new-look versions of "The Gong Show" and "Battle of the Network Stars" in the coming weeks will join returning efforts like "The $100,000 Pyramid," "Celebrity Family Feud" and "To Tell the Truth" on the schedule.

Retro reboots
"Battle of the Network Stars" is of particular interest to Gen Xers who were weaned on the original oddball series, which in retrospect served as an almost perfect distillation of 1970s America. Telly Savalas' human smokestack routine during this beef between "Welcome Back Kotter" star Gabe Kaplan and TV tough guy Robert Conrad is a reminder of how everyone used to smoke pretty much all the time, even in the midst of televised sporting events. And hoo boy, the constant stream of ethnic jokes.

While you're not going to see an awful lot of current stars participating in the tug-of-war or riding out the indignities of the dunk tank -- imagine CBS's reaction if, say, Jim Parsons were to suffer a season-delaying achilles tendon rupture while running a three-legged race with Mark Harmon -- the nostalgia factor alone could make "Battle of the Network Stars" a big hit among viewers at the upper reaches of the demo. The shoe premieres Thursday, May 29, on ABC, just a week after the network takes the wraps off an all-new "Gong Show" hosted by an incognito Mike Myers.

All told, the Big Four nets this summer will air just nine scripted series, which is in line with what they presented during last year's balmy interval. Broadcast's short-lived scripted solstice renaissance had its peak in 2014, when the networks aired no fewer than 18 dramas and comedies during the summer months. Much of the enthusiasm for scripted summer fodder was a reaction to the blockbuster ratings CBS scared up the previous year with "Under the Dome." Based on the Stephen King doorstop bearing the same title, "Dome" dropped on June 24, 2013, in front of a captive audience of 13.5 million viewers, of which approximately 5.4 million were members of the 25-to-54 crowd.

If broadcast is pulling back on its scripted summer commitments, cable continues to treat the warm-weather months as a proving ground for splashy original dramas. Unfortunately, the ongoing destabilization of live TV deliveries has eroded a huge chunk of the cable networks' targeted audience, and even some of the higher-rated shows have lost a great deal of ground. For example, AMC's "Fear the Walking Dead" returned for its third season to a live-same-day audience of 2.91 million viewers and a 1.1 in the demo, which marked a 65% decline compared to the 3.1 rating that the show served up in its year-ago opener.

Fractions of fractions
On the other side of the ledger, niche cable series such as Syfy's "Wynona Earp" and BBC America's "Orphan Black" are now reaching such tiny live audiences that they can no longer deliver so much as one-tenth of a ratings point. "Wynona Earp" returned last Friday down 55% to a 0.09 in the 18-to-49 demo, while the final season of the critically-lauded "Orphan Black" kicked off with a 0.07 rating, down 65% compared to its year-ago 0.2.

Bucking the trend for the time being are TNT's new dramedy "Claws," which arrived this Sunday to a 0.4 rating, up 10% compared to year-ago time slot occupant "The Last Ship," and "Animal Kingdom," which in its season two premiere boosted its demo deliveries by 10% to a 0.4.