To Start, Newsroom Stories in Sponsored Section Won't Include Competitors of SAP
READ THIS NEXT
Watch Elon Musk’s awkward ‘SNL’ promos—plus, why his hosting stint is so controversial

When Business Insider introduced a sponsored section last November called "The Future of Business," it promised to give its take on the subject alongside stories about the underwriter, SAP. 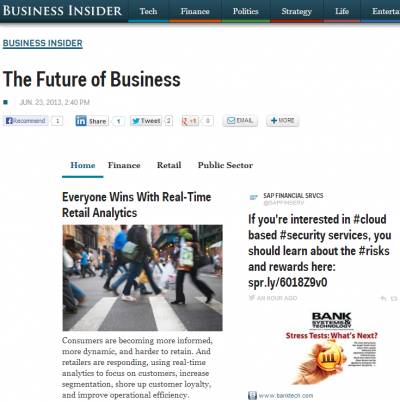 "We'll show you how technology -- and the dynamic companies using it -- are changing many facets of business as we know it, empowering our mobile lives, harnessing the power of big data, and creating a more sustainable future," its announcement said.

The announcement did not mention that the "dynamic companies" in 'The Future of Business" would not include SAP competitors, or that the selection of Business Insider articles running there would be subject to SAP approval.

"Ultimately, on the editorial side of things, as a brand, we don't have line item veto on any story, but we do have ultimate veto," said Sara Larsen, senior director of digital marketing at SAP. "If there is a story we really think doesn't reflect our brand perspective on the future of business, we'll say, 'Let's table that story.'"

"I can't imagine why we would force someone to sponsor a piece of content that they disagree with or are opposed to," Ms. Hansen said. "We can cover their competitors all night and day on the site and we do, but why would anyone in their right minds sponsor a story about their competitors?"

Critics, though, said the arrangement blurs the line that should divide newsrooms and ad sales. "It's not really the future of business if 'The Future of Business' has to ignore 10% of the companies out there," said George Freeman, an attorney with Jenner & Block and former longtime counsel at The New York Times. "They're subscribing to bias rules that are set down by their sponsor advertisers."

Magazines and newspapers have long run advertorials that resemble editorial more or less as closely as publishers permit. More recently websites like BuzzFeed have focused on sponsored content, now cast as "native advertising," arguing that it serves both readers and marketers better than traditional banner ads and boxes.

It's unclear how much editorial independence readers expect, however, from a sponsored section mixing newsroom coverage with posts marked as paid. The Wall Street Journal publishes three special sections underwritten by Deloitte -- Risk and Compliance, CIO Journal and CFO Journal -- where editorial stories by Journal reporters run alongside a box of content marked as sponsored. But Deloitte has no influence over which editorial stories appear, a Wall Street Journal spokeswoman said.

Readers can look beyond "The Future of Business" for Business Insider's coverage of SAP competitors, according to Ms. Hansen. "It's not that we're saying, 'We're creating the definitive all-inclusive Bible on the future of business," she said. "At that point we couldn't not write about another enterprise tech company, but the way we're using that term is a collection of stories and features about the topic broadly. We're choosing stories that are not deliberately in conflict with SAP, but we're not making choices that in any way diminish our ability to tell that story."

"The Future of Business," one of several sponsored sections on Business Insider, also presents posts from SAP social media pulled in through an app from Rebelmouse. Sponsored posts are clearly marked as such, and the editorial content written for the section carries the SAP logo and an explanation:

And when Business Insider reporters write about SAP, those stories don't appear in the section. The only SAP coverage in "The Future of Business" is sponsored.

Kelly McBride, a faculty member at journalism think-tank the Poynter Institute, said the note atop the editorial articles is not specific enough. "That doesn't cut it," said Ms. McBride, who focuses on journalism ethics. "It needs to be more thorough." 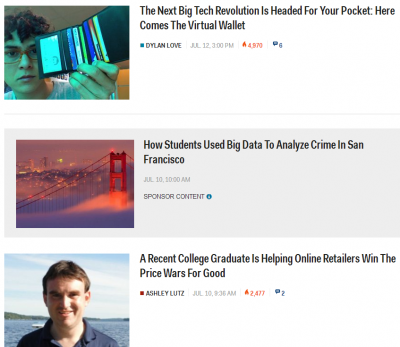 The section also runs stories by the newsroom and sponsored posts

The veto power granted SAP does not give it the right to tweak headlines or language in the story, Ms. Hansen noted. "They can absolutely reject a piece of editorial content," she said. "They just can't tell us, 'If you change the headline or change what you said we would accept it.' It's not that they're sitting in our editorial meetings every week saying, 'yes, no, yes no.'"

"If we felt like we were producing a poor editorial product, whatever they're paying us wouldn't be worth it," she added. "We've rejected projects in the past because we didn't feel like we could comfortably write about a topic."

Business Insider is the first publisher to use the Rebelads app from Rebel Mouse to help populate a sponsored section, something it hopes will make it easier to attract eyeballs to its native programs. "We have to be offering fresh, innovative solutions," said Ms. Hansen. "We're not the biggest in the category yet and so if we want to get anywhere we need to come to our clients with a better idea, a cooler mouse trap, a better solution to meet their needs."