Buyers are circling Tronc after split with flagship L.A. Times 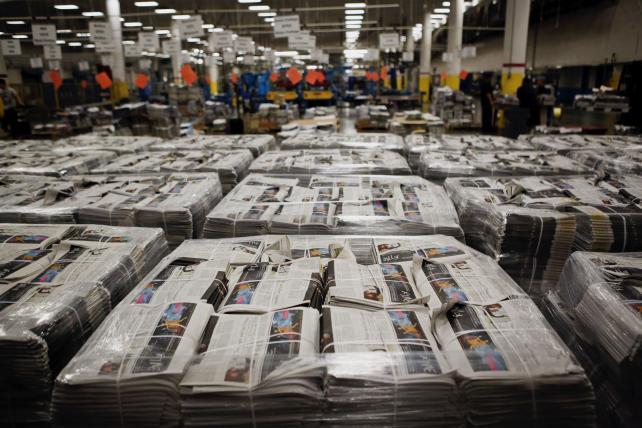 Tronc, the newly slimmed-down newspaper publisher, could get even slimmer.

After completing the sale of the Los Angeles Times to billionaire Patrick Soon-Shiong, the Chicago-based company must now decide whether to forge ahead in the news business without its crown jewel or unload more, perhaps even all, of its other newspapers. While the $500 million sale helped Tronc repay debt, it left the company without an asset that had contributed about a third of its sales in a struggling industry.

"The L.A. Times was their flagship paper," says Doug Arthur, an analyst at Huber Research Partners. "When you take out the flagship, what are you left with?"

What's left has caught the eye of potential suitors. Hearst Corp., owner of the Houston Chronicle and other daily newspapers, is interested in buying some of Tronc's titles but not the company, a person familiar with the matter said. Meanwhile, a relative of a former Chicago Tribune publisher is raising money to buy that newspaper. Soon-Shiong, who is Tronc's second-largest shareholder, says he'd like to see the company sell more assets if it gets "the right price."

"It would be good for the shareholders," Soon-Shiong says.

Tronc is talking to potential buyers of other publications in its portfolio, titles such as the New York Daily News, Baltimore Sun, Hartford Courant and two newspapers in Florida, industry analyst Ken Doctor reported. A Tronc spokeswoman declined to comment.

Should Tronc decide to let go of more papers, it would mark one more retreat in a decade of uncertainty for the once-powerful publisher. Formerly known as Tribune Co., the company filed for bankruptcy in 2008 and then spun off its newspapers. The publications became the target of a failed acquisition bid by Gannett two years ago.

More recently, Chairman Michael Ferro stepped down amid harassment claims and the company decided to weigh another name change. Tronc is also the owner of the Capital Gazette, the Annapolis, Maryland, newspaper where a gunman killed five people last week.

Through it all, the newspaper business remains in decline. Today, the best hope for many publishers is to find a billionaire owner or to build a large base of online subscribers as online advertising dollars increasingly go to Google and Facebook. Many smaller newspapers are controlled by hedge funds that squeeze them for profit instead of reinvesting.

Finding a buyer isn't as easy as it used to be. Gannett appears less interested in newspaper deals these days. On a recent earnings call, CEO Robert Dickey said he'd like to buy ad technology companies. GateHouse Media has snapped up newspapers, but smaller ones like the Palm Beach Post and Austin American-Statesman.

"Who would want to buy a newspaper company of that size?" Rick Edmonds, an analyst at the Poynter Institute, says of Tronc. "I don't think there are very many people."

Sargent M. McCormick, a distant relative of the Tribune's former legendary publisher, Robert R. McCormick, has formed a new venture fund to raise money from civic groups and businesses to buy the newspaper from Tronc. Despite his ties to Tribune history, McCormick isn't well-known in Chicago media circles, and his plans for the newspaper are unclear.

Tronc has taken steps to bolster its online business. Digital subscriptions at its newspapers reached 342,000 at the end of the first quarter, nearly double the figure from a year ago. In February, it bought a majority stake in BestReviews, an online product-review site.

Tronc investors have been on a wild ride. The shares tumbled 24 percent on March 8 after the company didn't offer guidance on its future performance, then surged 12 percent in April on a report that SoftBank was interested in buying the company. Tronc stock is roughly flat overall this year, compared with an 11 percent gain for McClatchy Co. and an 8 percent drop for Gannett -- two other newspaper chains. New York Times Co., fueled by its online subscriber gains, has climbed 40 percent this year.

Should it hang onto its papers, Tronc has some extra cash from the L.A. Times sale and has "a lot of power to do interesting acquisitions or take the company private," Arthur said.

The company bought the New York Daily News in September, then acquired The Virginian-Pilot in May for $34 million. Mergers and acquisitions "will continue to be a significant part of our future," CEO Justin Dearborn said in February.

Even so, some observers wonder if Tronc's leadership is committed to running the company. Dearborn, who was chosen by Ferro, doesn't have a background in media. He is also entitled to a large payout if the company gets sold, according to Doctor.

"Everything I've seen, is they're positioning the company for a sale," said Robert Feder, a veteran media reporter in Chicago.