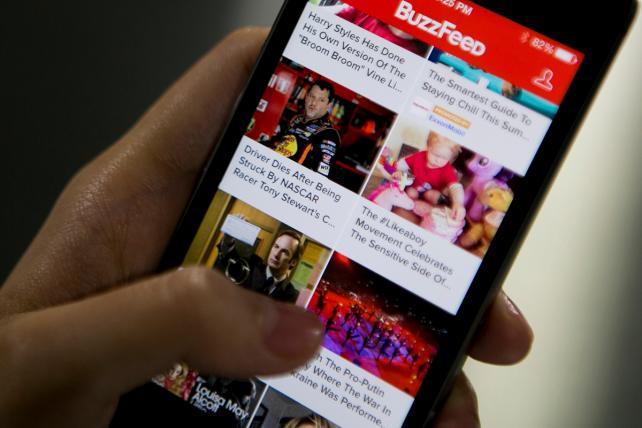 A few years ago BuzzFeed Inc. posted a picture of a cocktail dress online and asked readers what colors they saw.

The photo triggered a raging debate about colors and racked up millions of views for the online publisher. But one question gnawed at BuzzFeed's bosses: how the picture went viral in China. Chinese censors block the country's web users from using Facebook -- one of BuzzFeed's preferred outlets.

Now BuzzFeed, the online media giant famous for its viral listicles and memes, will gain more insight into one of the world's largest internet markets through a licensing deal with Beijing Bytedance Technology Co. Bytedance will distribute BuzzFeed's content, including its popular Tasty food videos, to its millions of users, helping the U.S. publisher get around the Chinese firewall.

Bytedance owns several social-media services. Toutiao, which aggregates news and videos, is like a mix of Twitter and Facebook's News Feed. In five years, it has become one of the world's largest news sources. Xigua is like YouTube, with a focus on short video clips. Bytedance has about 200 million daily active users in China and other markets.

BuzzFeed is trying to diversify in the face of daunting challenges for digital media companies. Facebook and Google are vacuuming up the majority of online advertising, leaving fewer dollars for publishers. In November, the company cut about 100 jobs, or 8 percent of its U.S. workforce, after missing its revenue target for 2017. BuzzFeed and other publishers may also see their audiences decline when Facebook retools its News Feed and de-emphasizes their posts.

The licensing deal with Bytedance is a low-risk way to enter new markets. In 2016, BuzzFeed launched a Japan edition in a joint venture with Yahoo Japan.

BuzzFeed declined to disclose financial details of the licensing deal. The company won't initially be selling advertising in China.

"This is the first step," Scott Lamb, BuzzFeed's vice president of international, said in an interview. "Operating as an international media company in China is complicated. We don't know a lot about it."

Local recipes
While Chinese viewers will mostly see the same BuzzFeed content as other countries, the team running Tasty, a unit dedicated to sped-up recipe videos, has started testing new cuisines for different markets, including recipes for a Chinese audience.

Bytedance will also distribute other BuzzFeed content, including Goodful, for wellness; Nifty, for do-it-yourself projects; and Bring Me, for travel.

BuzzFeed may soon compete head-to-head with its new Chinese partner, which plans to promote its popular service to foreign audiences. The overseas version of Toutiao, TopBuzz, is already the second most popular news app in Apple Inc.'s U.S. App Store. The company also plans to use recent acquisitions -- Musical.ly, an app for creating and sharing personal music videos, and Flipagram, which turns photos and videos into slideshows -- to expand its audience around the world.

As for the famous dress, BuzzFeed executives concluded Chinese web surfers got around the firewall using a VPN, a virtual private network that masks their location and stymies blocking efforts, according to Lamb.