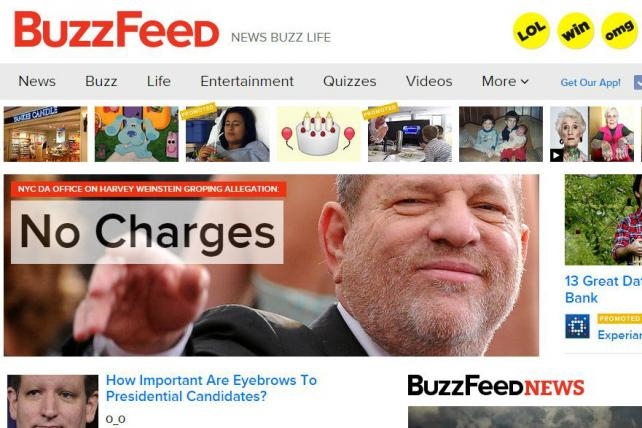 BuzzFeed restored two deleted posts on Friday after Gawker raised questions about whether the viral news and entertainment site removed them because they were critical of advertisers.

Ben Smith, BuzzFeed's editor in chief, said in a note to staff that the posts hadn't been unpublished to protect ad dollars:

You also have a right to ask about whether we did this because of advertiser pressure, as Gawker suggested. The answer is no. I field complaints all the time from companies and individuals, including advertisers, and see it as my job to shield you from that pressure.

BuzzFeed relies almost entirely on advertising for its revenue, which topped $100 million last year. Almost all of it came from so-called native advertising in the form of articles, lists and videos, which the site's creative-services department helps create while working closely with brands and their media agencies.

It's also sought to bolster its reputation as a hard-hitting news organization, hiring editors and reporters to staff up a newsroom.

BuzzFeed didn't immediately return our emails, but the site has a documented history of disappearing less-than-positive content on behalf of Unilever -- whose suite of brands have placed major ad buys on BuzzFeed.

That's true about the ad buys, although Dove has not advertised on BuzzFeed since October 2013, according to a BuzzFeed executive. However, the ads, in the form of sponsored articles, still live on BuzzFeed. No other Unilever brands are advertising on BuzzFeed, nor are there any ad deals in the works with Unilever-owned brands, the executive added.

Mr. Smith said in a Thursday note to staff that BuzzFeed deleted the Dove post because it didn't fit the tone of the section where it ran, BuzzFeed Life.

Less than 24 hours later, Gawker surfaced another BuzzFeed article that criticized an advertiser --until it quickly disappeared:

On February 13, BuzzFeed and the toy manufacturer Hasbro announced a joint marketing campaign to celebrate Monopoly's 80th anniversary. A few weeks later, as Gawker commenterdreamingofpastry noted, BuzzFeed UK editor Tom Chivers published a 1200-word post titled "Why Monopoly Is The Worst Game In The World, And What You Should Play Instead." ... And then, much like the Dove post, BuzzFeed deleted the post within a day.

BuzzFeed declined to comment and instead pointed to Mr. Smith's note to staff. A spokeswoman from the PR firm Edelman, which represents Dove, didn't respond to emails or a call seeking comment.

Gawker has doggedly pursued BuzzFeed in the last year. Among other things, Gawker has reported that BuzzFeed deleted more than 4,000 posts because they didn't fit updated editorial standards and published an article from a former BuzzFeed writer claiming Mr. Smith instructed him to removed a post critical of another Unilever brand and BuzzFeed advertiser, Axe body spray.

Nick Denton, Gawker founder's founder, has both criticized BuzzFeed and given it credit. A year ago, he told Gawker employees:

Jonah Peretti's company is pointless. But he understands the internet; he manipulates the Facebook ecosystem better than anyone; and he is utterly shameless in his pursuit of viral stories. (Even more shameless than we are, some would say.)

And Buzzfeed is the perfect competitor -- highly motivating. It is a fair fight; some earlier rivals like Gothamist required too much puffing up to make a plausible rival. And it's a meaningful fight, because Gawker Media and Buzzfeed represent two very different forces struggling for the soul of internet media.

And here's the full text of Mr. Smith's note to BuzzFeed employees on Friday:

I blew it. Twice in the last couple of months, I've asked editors -- over their judgment and without any respect to our standards or process -- to delete recently published posts from the site. Both involved the same thing: my overreaction to questions we've been wrestling with about the place of personal opinion on our site. I reacted impulsively when I saw the posts and I was wrong to do that. We've reinstated both with a brief note.

You also have a right to ask about whether we did this because of advertiser pressure, as Gawker suggested. The answer is no. I field complaints all the time from companies and individuals, including advertisers, and see it as my job to shield you from that pressure.

We obviously need to do a better job of giving guidance to writers and editors on teh place of personal opinion on the site. That's an ongoing conversation in which we'd love your input, and we'll keep you posted.

We'll have a quick all-edit meeting at 5:00 EST in the back canteen in New York if you've got questions; we'll circulate dial-in information for other offices.