'The Good Doctor,' 'This Is Us' Are This Season's C7 Darlings | Ad Age
Skip to main content

'The Good Doctor,' 'This Is Us' Are This Season's C7 Darlings 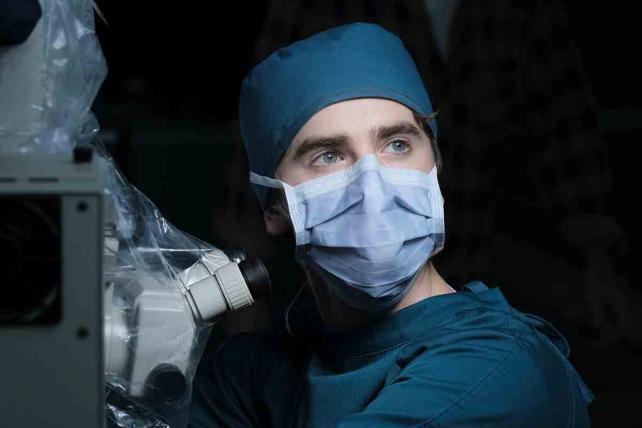 ABC's 'The Good Doctor' is gaining more than any other prime-time broadcast series between its initial live-plus-same-day ratings and its final commercial ratings over seven days of viewing.
Credit: ABC/Eike Schroter

If the definition of insanity is doing the same thing over and over again and expecting a different result, then the TV industry has lost its goddamn mind.

A decade into the stopgap measure that is the C3 ratings currency, the compromise still isn't doing nearly enough to offset the ravages of the DVR … and the extended dance remix of C7 is faring little better.

Ad Age has gotten its grubby little meathooks on the first three weeks of commercial deliveries for the new broadcast season, the only benchmarks that advertisers and anyone else interested in the state of the TV marketplace really care about -- no matter how much the networks cloud the waters with DVR-inflated program ratings.

And for the most part, the series that put up the biggest numbers in the currency are already among TV's most-watched.

The average lift between a show's initial live-plus-same-day delivery and its final C3 rating was just two-tenths of a ratings point, according to the prime-time deliveries captured by Nielsen Sept. 25 through Oct. 15, a net gain of about 257,800 adults 18 to 49.

In other words, ABC, CBS, NBC and Fox are adding a little over a quarter-million demographically relevant commercial impressions when the three-day currency data is calculated.

When we really watch commercials

And because that's the same lift the networks saw in 2016 and 2015, it's safe to say the the decade-old C3 currency has stalled out in the battle against ad skipping.

The C7 numbers, at least, are slightly more encouraging. The first three weeks of the season saw broadcasters average a lift of four-tenths of a ratings point from live-same-day to C7, which translates to an additional 515,000 members of the demo who didn't flake out on the advertising during delayed viewing.

ABC's new Monday 10 p.m. drama "The Good Doctor" is the biggest gainer in C7 thus far, soaring from an average 2.1 rating among adults 18-to-49 in live-same to a 3.1, a gain of 48 percent. With three weeks of currency data on the books, "The Good Doctor" is the fourth-highest-rated scripted broadcast show, up from No. 6 in live-same-day and up a staggering 244 percent over the show in the same time slot last year, "Conviction."

Other big gainers in C7 include NBC's "Will & Grace" reboot, which improved from a 2.3 live-same-day average to a 2.9, making it the Peacock's highest-rated comedy in five years, and three dramas that added six-tenths of a ratings point to their live-same-day counts in their respective target demos (NBC's "This Is Us," ABC's "How to Get Away with Murder" and CBS's "Criminal Minds"). Already broadcast's top-rated drama, "This Is Us" enjoyed a coals-to-Newcastle lift during premiere week, improving from its massive 3.9 rating, or around 5 million adults 18 to 49, to a 4.8 in C7 -- a gain of 1.2 million advertiser-coveted viewers.

Elsewhere on the broadcast slate, Fox's new space opera "The Orville" seems to have earned its recent renewal, despite putting up a rather underwhelming 1.0 in live-same-day in its Thursday night time slot. With an average draw of a 1.5 in C7, demo deliveries for the Seth MacFarlane project jumped 50 percent, thereby clawing back some 645,000 relevant commercial impressions.

For all the shows that have notched significant gains upon conversion to the C7 currency, a number of one-time heavy hitters are getting less lift than years past. Fox's "Empire," which last season bolstered its vanilla live-same-day premiere deliveries by a full ratings point, is winning back half that amount of commercial views this time around. ABC's "Designated Survivor" has experienced a proportionate winnowing in its C7 deliveries, gaining four-tenths of a point in the expanded currency compared to its year-ago boost of eight-tenths.

While it's understandable that the networks don't want anyone outside the TV transaction triangle to see the C3/C7 data, the bloated live-plus-3-day/live-plus-7-day program ratings they regularly release to the four winds present a distorted picture of the only deliveries that matter to advertisers. For example, while the Fox PR department breathlessly hyped up the 83 percent lift the Oct. 3 installment of "Brooklyn Nine-Nine" reaped in playback (the half-hour grew from a 0.6 in live-same to a 1.1 in live-3), those delayed views barely moved the needle for commercial ratings. Per Nielsen, that episode of the ensemble comedy drew a 0.8 in C3, and while a 33 percent lift is obviously very welcome in this ad-averse media environment, it pales in comparison with the puffed-up live-3 number that circulated that same week.

CBS also prefers to traffic in the time-shifted program numbers. Last month the network highlighted the 54 percent lift notched by the Sept. 26 season premiere of "Bull" (in the 18-to-49 demo, the episode improved from a 1.3 in live-same to a 2.0 in live-3), but the jump lost much of its luster when the C3 data was brought to light. The "Bull" table-setter inched up a tenth to a 1.4 in C3, so while an additional 900,000 adults 18 to 49 tuned in during the three-day window, only 129,000 of them watched the ads.

The real value of program ratings

Not that the DVR data is entirely useless. While advertisers are only interested in the C3 and C7 currencies, the TV model is evolving so rapidly that ad sales revenue is diminishing in importance. As CBS has so ably demonstrated, there are numerous measures broadcasters can take in order to make a buck on a homegrown series. Advance streaming and foreign rights agreements can bring in enough money to make a show profitable before it has even aired, thereby transmuting the ad units that get sold over the life of the show into so much gravy. And as far as the legacy syndication model is concerned, the time-shifted program data can be leveraged as a means to jack up the price for the off-network rights to a show on the auction block.

If it's a bit early in the season to weigh in on the fates of TV's so-called bubble shows, a number of series that aren't faring particularly well in the live-same-day ratings look like much stronger contenders in light of their commercial deliveries. While the 1.4 live-same-day rating for Fox's new X-Men-adjacent series "The Gifted" would be sufficient to earn a renewal were the season to end today, for example, the 1.9 it is drawing in C7 makes it a top-10 show. Another new show that is pulling its weight in the currency is CBS's military drama "SEAL Team," which improves from a 1.9 live-same-day rating in the network's target demo to a 2.4 when a week of delayed commercial impressions are tossed into the mix. That translates to a not-inconsiderable net gain of around 600,000 adults 24 to 54 (the group CBS sells against).

For reasons that aren't entirely clear, the lower-rated shows that enjoy the most transformative lifts in C7 are all new to this season's broadcast schedule. For example, while the freshman sitcom "The Mayor" dwells in ABC's comedy cellar with an average draw of a 1.1 rating in live-same-day, the 1.5 it posts in C7 tops the 1.4 rating its Tuesday night battery mate "Fresh Off the Boat" is averaging in the currency, and puts it in a tie with "Speechless."

Other newbies that appear to have a new lease on life in C7 include the aforementioned "The Orville" and NBC's anthology series "Law & Order: True Crime."

Of course, there are plenty of shows that don't see much, if any, improvement in C7. Effectively canceled by ABC last month (the remaining six episodes will be burned off on Saturday nights in December), the Kyra Sedgwick drama "Ten Days in the Valley" only added one-tenth of a ratings point in C7 compared to its untenable 0.4 average in live-same-day. Meanwhile, a week's worth of playback is unlikely to justify a second renewal for Fox's "The Exorcist," which is eking out a 0.6 in C7 in the 18-to-49 demo, up just two-tenths of a ratings point from its live-same-day average.

And then there are shows that are already so mammoth that they don't require a commercial ratings lift. Anything that over-indexes on live viewing tends to a lose a little ground in C7, although given the size of those audiences, this isn't something that keeps network ad sales execs awake at night. Consider sports, 93 percent of which was watched in real time last year. The three "Sunday Night Football" games for which Nielsen has processed the C7 data averaged a 5.7 live-same-day rating in the 18 to 49 demo, which was adjusted down a notch to a 5.6 in C7. That trivial reversal can largely be chalked up to football fans who manipulate their DVRs and sofa kickoff times in order to more efficiently breeze through the commercial breaks, without significant viewing in later days to potentially pad commercial views.

TV's top-rated scripted series, AMC's "The Walking Dead," also loses a bit of ground in the currency. Per Nielsen, the Oct. 22 Season 8 premiere averaged a 5.0 in the 18-to-49 demo in live-same-day. That number that was nibbled down to a 4.7 in C3.

Developed as a compromise measure back in 2007, C3 blends a very rough estimate of average commercial ratings with three days of time-shifted viewing; as such, it offers networks, buyers and advertisers the best approximation of actual ad deliveries. Networks began negotiating against C7 deliveries five years after the original currency was adopted.