Cambridge Analytica attempts a self-defense via Twitter tweetstorm, but it backfires

Cambridge Analytica, the London-based data-analytics firm at the center of a Facebook-related firestorm thanks to journalistic exposés by The New York Times and the U.K.'s Observer (see "How Trump Consultants Exploited the Facebook Data of Millions," which was released online by the Times on Saturday and appeared on Sunday's print front page, and "The Cambridge Analytica Files" in The Observer, which followed the same online/print-release cycle), took to Twitter over the weekend to attempt to defend itself.

It didn't go so well.

Cambridge Analytica fully complies with Facebook's terms of service. We are in touch with Facebook now and can confirm that we do not hold or use any data from profiles https://t.co/YD8kFXCFTL

It links to a longer statement via press release. The precise wording of the self-defense escaped no one on Twitter. For instance, here's the most-liked response to the above tweet at the moment:

Parse carefully, America. The terminal liars at @CamAnalytica are using present tense. They did. They got caught. Of course they don't now: there's already going to be hell to pay, and they're running for cover.

Reality Check: Cambridge Analytica uses client and commercially and publicly available data; we don't use or hold any Facebook data. 1/8

CA then attempted to shift blame to an outside company, GSR, for selling it Facebook data it allegedly wasn't supposed to:

When we learned GSR sold us Facebook data that it shouldn't have done, we deleted it all — system wide audit to verify 2/8

Mr. Wylie is a former contractor for, not a founder of CA. He is the subject of restraining undertakings to prevent misuse of the company's intellectual property. 4/8

And then, in four tweets closing out the tweetstorm, CA attempted to downplay its entire approach:

Advertising is not coercive; people are smarter than that 5/8

Obama's 2008 campaign was famously data-driven, pioneered microtargeting in 2012, talking to people specifically based on the issues they care about. 6/8

CA works for brands and political parties from across the political mainstream in democratic elections. 8/8

The problem with the company's position here is that the product it's been selling isn't mere "research & analysis"—it is, essentially, consumer/voter manipulation. And in general the Twittersphere isn't buying Cambridge Analytica's "advertising isn't coercive" bit or CA's attempt to portray itself as simply engaging in especially well-targeted advertising:

That's the entire point of advertising.

Well then, what's the basis of your business?

You develop complex psychological profiles of people without their concent and then target them with ads to sway their opinion without their knowledge. That's not Advertising it's brainwashing . You'll do it for any cause that pays and at any cost.

And as lots of people have pointed out on Twitter, Cambridge Analytica proudly touts its expertise in "Data-driven behavior change" in the main graphic right on its Twitter page: 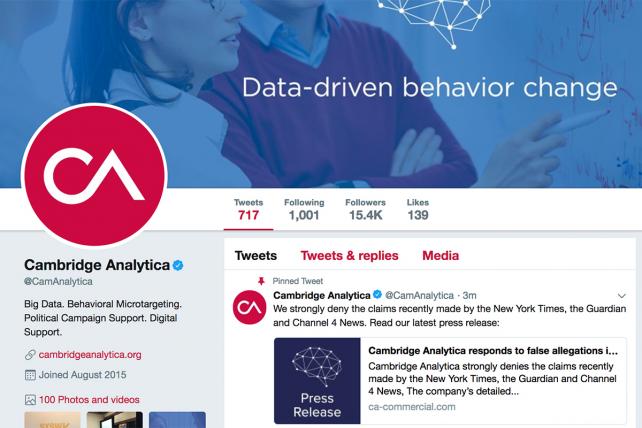