Small-Circ Effort Due on Jan. 27
READ THIS NEXT
Watch: How brands should approach responsible media investing—with OZY Media’s Carlos Watson

Capital New York, the Politico sibling that covers politics and media in New York, is rolling out a small monthly print magazine starting this month, according to parent company Allbritton Communications. 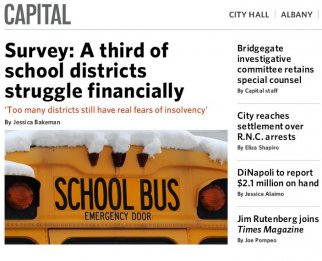 The first issue, due out Jan. 27, will have a run of about 8,000 copies, the company said, with plans to distribute about 6,000 copies in Manhattan and 2,000 in Albany. Copies will be delivered to the state capitol building in Albany, City Hall in Manhattan and key individuals in the industries Capital New York covers, according to Roy Schwartz, chief revenue officer at Capital New York and Politico.

The magazine will be free, Mr. Schwartz added, with subscriptions available upon request to those who "qualify" based on their job title, job responsibilities, or other criteria. "Something in hard copy will go a long way to building the Capital New York brand," he said. "But there will be revenue there as well in terms of print advertising."

Introducing a print magazine is the latest step in Capital New York's expansion, which began last September when Politico parent Allbritton Communications bought Capital from founders Josh Benson and Tom McGeveran for an undisclosed amount. They continue to co-edit the site, but under the new owners, Capital New York has tripled its staff in an effort to cover state government, City Hall and media much the way Politico covers Washington, D.C. The business model borrows from that of Politico, with both ads and paid subscriptions to "pro" products. It also plans to host events, according to Mr. Schwartz.

The site's magazine also underscores a growing if limited embrace of print among digital-only media properties, with several websites introducing some version of a physical magazine. Politico, for example, rolled out a six-times a year glossy magazine in November. The music website Pitchfork recently introduced a quarterly magazine, The Pitchfork Review. And IBT Media, which bought the digital-only Newsweek, announced in December plans to revive the print edition starting in early 2014.