Two new programs are expected to generate the most household commercial ratings of all the launches set for the coming 2012-2013 TV season, according to Ad Age 's annual survey of ad-buyer commercial-ratings estimates -- and they are both from CBS.

The survey, compiled using averages of fourth-quarter 2012 and first-quarter 2013 commercial-ratings estimates from as many as five different media-buying agencies, suggests CBS's "Elementary," a Thursday-night update of the Sherlock Holmes mythos set to run at 10 p.m., and "Vegas," a Tuesday-night drama featuring Dennis Quaid as a sheriff in a pre-glitz Sin City, are set to be the programs among the season's freshman entries that will lure the most viewers who will also stick around for the commercials.

'Elementary' will run immediately after the game. 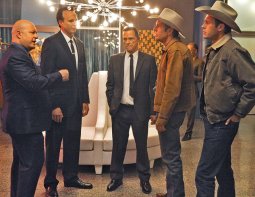 "Elementary" and "Vegas" are each set to notch a 6.5 household C3 rating, according to buyers -- noticeably more than ABC's "Modern Family" or "Grey 's Anatomy" is expected to generate, but significantly less than proven outsize hits such as Fox's "American Idol," CBS's "Big Bang Theory" or ABC's "Dancing With the Stars."

C3, the shorthand term for commercial ratings , measures the number of viewers who actually watch commercial breaks during a selected program rather than changing channels or fast-forwarding past them with a digital video recorder. Viewers who watch ads live as they run or as many as three days after they air are included in the ratings . Since the start of the 2007-2008 TV season, advertisers have crafted transactions based on C3 ratings , which take into account the number of viewers who watch commercials during a program, rather than the traditional ratings for the program itself. At present, a single ratings point equals about 1.15 million households.

As with every new prime-time schedule, there are bright spots as well as cautionary tales. Veteran CBS program "The Mentalist" is seen as getting a C3 boost by moving to Sunday night from Thursday, though the aging "Two and a Half Men" will see its C3 ratings trimmed a bit by moving to Thursday night from Mondays, buyers predict. NBC will eke out some improvements in its early Thursday-night lineup by subbing "30 Rock" for "Community" at 8 p.m. and "Up All Night" for "Parks and Recreation" at 8:30 p.m. (and improve "Parks" by moving it to 9:30 p.m.).

Most noticeable, however, will be declines in two pillars of Fox's lineup, "The X Factor" in the fall and the maturing "American Idol" in the spring. After making its debut to expectations that were higher than its abilities to deliver, "X Factor" is seen falling to an average C3 household rating of 5.8 this season on Wednesdays, compared with the 10.22 buyers thought it would notch last season. On Thursdays, "X Factor's" average household C3 will fall to around 5.6 from the 9.64 estimated last season.