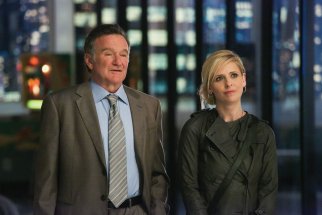 'The Crazy Ones,' a sitcom about advertising coming to CBS this fall

Time Warner Cable briefly pulled CBS's signal earlier this week as the latest deadline passed for a new carriage deal in those markets, arguing that the network's demands were exorbitant. But CBS's financial results today show just how important pay-TV fees have become for the broadcaster.

Net income increased to $472 million from $427 million a year earlier, CBS Corp. said Wednesday in a statement. That was higher than analysts had expected. Second-quarter revenue grew 11% to $3.7 billion, also beating analysts' estimates.

To increase revenue and reduce its dependence on advertising, CBS is demanding cable and satellite-TV services pay higher fees to retransmit the company's broadcast and cable programming to subscribers.

"The average home as over 100 channels but they're watching 10 to 15 of them and we are one of those 10 to 15 in every home," CBS Corp. CEO Les Moonves said in a conference call with analysts. "We're actually number one in every home, so we feel that it is justified. We should get paid for it. And that's the way of the world and, by the way, most everybody agrees. Most everybody agrees that we are getting paid fairly in most places."

Profit at CBS's entertainment division, which includes the broadcast network, increased 1.6% to $391 million, fueled by an 18% jump in revenue to $2.01 billion. Revenue from licensing of reruns and pay-TV fees soared.

Income at CBS's cable division, home to its Showtime premium cable channel, rose 10% to $202 million on sales that increased 16%. Local broadcasting, which includes the company's TV and radio stations, boosted profit by 4% as revenue fell.

In the past year, the company has signed streaming agreements with Netflix, Amazon's LoveFilm and Hulu.

The company's results also benefited from a quirk of the calendar, however: The NCAA men's college basketball championship aired during the period, later than a year ago, contributing to higher advertising.

The company is selling its billboard operations in Europe and Asia to Los Angeles-based private equity firm Platinum Equity for about $225 million. The sale comes as CBS plans to split off its U.S. billboard unit, convert it to a real estate investment trust and sell shares in the new entity.