The latest Super Bowl is "already proving to be more lucrative than ever," CBS Corp. CEO Leslie Moonves said during the company's second-quarter earnings call with Wall Street.

Commercial time in Super Bowl 50 is selling for $5 million for a 30-second spot, Mr. Moonves said, noting that digital is providing additional revenue. It was previously reported that for the first time linear and digital ads will be sold together for the Super Bowl.

Turning to the upfronts, Mr. Moonves said CBS notched mid-single-digit increases in the cost to reach a thousand viewers, an industry standard known as CPMs. But "volume was not as robust as in years past across the industry," he added.

"People are just waiting longer to make their buying choices," Mr. Moonves said, noting the scatter market is improving. In the third-quarter CBS is seeing double-digit gains in pricing, he added.

"We see that extending beyond the third quarter and are confident that the strength and stability of our lineup will increase throughout the season," Mr. Moonves said.

Late-night and evening news performed particularly well in the upfront, he said.

Stephen Colbert will take over "The Late Show" next month, which is igniting interest from advertisers, as is James Corden, who joined the network in the 12:30 slot in March. 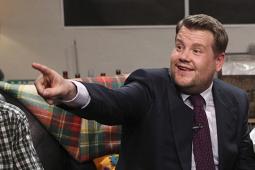 CBS News also posted solid upfront gains, Mr. Moonves said, as "every single one of our news broadcasts has more viewers now than it did a year ago. Our hard news approach is clearly working, and it will pay off that much more the quarters to come as we broadcast our shows through the election cycle."

Mr. Moonves also said that C7 – commercial ratings in the period within seven days after a show airs – was an even bigger part of its upfront deals this year.

During the quarter, ad sales decreased 3% to $1.6 billion.

Auto and healthcare categories are exhibiting strength in advertising, while entertainment and financial services where somewhat soft.

Mr. Moonves said dynamic-ad insertion – the ability to insert new ads into programming that lives on-demand beyond the seven-day window – has become more of a reality.