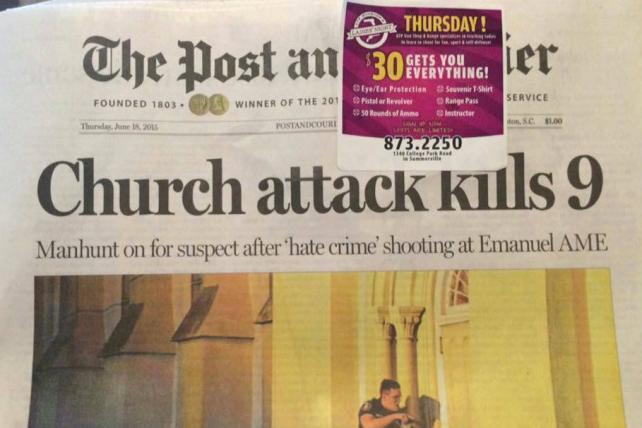 The Charleston Courier and Post has apologized "to those who were offended" by a gun-range ad stuck on the front-page of certain editions Thursday, the day after a gunman shot and killed nine people in a Charleston church.

Angry commenters poured onto the paper's Facebook page, denouncing the ad, which is a sticker placed just above a headline about the attack. "What were you thinking?" One person wrote. "Posting a gun sale sticker above the article about murder committed with a gun is beyond disrespectful. Shame!"

The paper issued the following mea culpa in response:

"The front-page sticky note that was attached to some home delivery newspapers on Thursday was a deeply regrettable coincidence. We apologize to those who were offended."

The Courier and Post earned plaudits earlier this year when it won a Pulitzer Prize for public service.

Today's incident ranks among the more appalling ad-edit placements, but digital media has led to some unfortunate juxtapositions. Last year, for instance, an Apple ad on The New York Times websites ended with an underwater scene next to a headline about Malaysia Airlines Flight 370 plunging into the ocean.