Checking in on Wired's Ad-Blocking Experiment, Including an Ad-Free Version | Ad Age
Skip to main content
Sign In Register

Checking in on Wired's Ad-Blocking Experiment, Including an Ad-Free Version 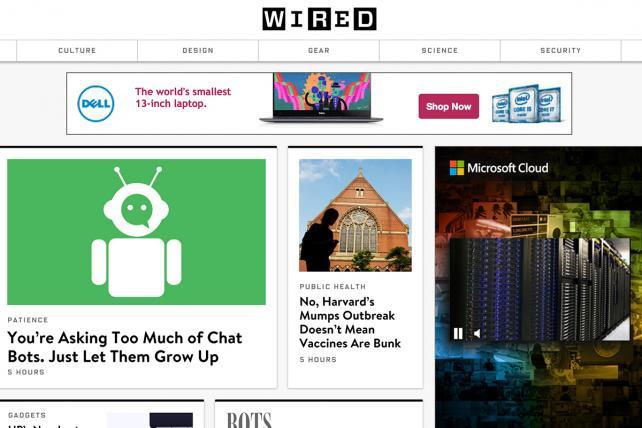 In early February, Condé Nast's Wired took a stand against the rise of ad-blocking technology, which was being used on more than 20% of visits to the magazine's website.

It gave ad-blocking Wired readers two options: whitelist Wired.com, allowing ads to be served as intended, or pay $1 per week for an ad-free version of the site.

"We know that you come to our site primarily to read our content," Wired said in a note to readers at the time, "but it's important to be clear that advertising is how we keep WIRED going: paying the writers, editors, designers, engineers, and all the other staff that works so hard to create the stories you read and watch here."

Nearly three months in, Wired Head of Product and Business Development Mark McClusky pronounced himself pleased with the early returns.

"Overall, it's going great," he told Ad Age. "We've exceeded sort of our hopes and expectations in terms of the performance."

The "abandon rate" refers to the number of people who have decided that they'd rather stop reading Wired.com than either whitelist the site or open their wallets for ad-free access.

As the magazine hoped, Wired readers have been very open with their thoughts about the ad-free offering, and about how the ad experience could be improved, according to Mr. McClusky. "We're getting great ideas from them," he said.

When asked whether the ad-free offering would continue indefinitely, Mr. McClusky said the magazine would continue to experiment and iterate, and teased the introduction of some new offerings for readers (without going into any more detail).

Mr. McClusky, who previously spent two years as editor of Wired.com, said he personally has installed ad-blockers for testing purposes, but doesn't use them generally. "I try to practice what I preach in terms of supporting journalism online," he said.

The New York Times, like Wired and other publishers, is experimenting with new approaches for dealing with ad-blocking, which has been singled out as a concern for companies that rely on digital advertising for revenue.

In early March, some Times readers started seeing a message that pleaded with them to either pay for digital access or turn off their ad-blocker.

"We don't have anything further to say now," a Times spokeswoman said recently when asked for an update on the experiment, which the company said was one of the "various approaches" they're testing to deal with the ad-blocking conundrum.