Sneaky Ads: In China, the Characters From the Show Appear in the Commercials, Too | Ad Age
Skip to main content

Sneaky Ads: In China, the Characters From the Show Appear in the Commercials, Too 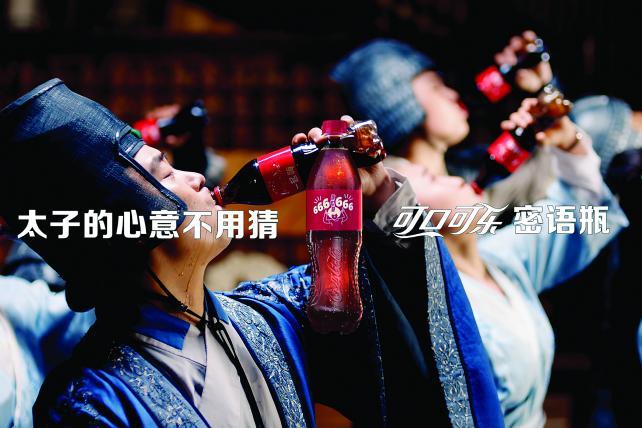 Characters from a distant era grab a Coke in 'Princess Agents.'
Credit: iQiyi

"Princess Agents," a Chinese drama set in a long-ago dynasty, is about a young slave woman who becomes a sword-wielding military general. It features, among other period details, elaborate costumes: silky robes, braided hairdos and plenty of armor. But viewers who streamed the show online this summer encountered a startling, anachronistic scene: the series' sweaty warriors cracking open a chest filled with icy Coca-Cola.

Chinese online video platforms are a hotbed of advertising experimentation, pushing limits of how and where brands typically appear. The results are often surprising. Imagine if the 18th-century Scottish clans of the Starz drama "Outlander" took a break from warring to feast on haggis and Stove Top stuffing. Or if "Downton Abbey" paused for a commercial, only to show the household staff spritzing the castle curtains with Febreze.

It may sound bizarre, but this kind of thing happens often on China's streaming sites, where the tactic is widespread in everything from period dramas to reality TV. People call it "native video advertising" or "creative mid-roll." It's a clever way of serving brand content to people who aren't expecting to see ads in the middle of their shows. These ads are interruptive, just like an old-fashioned commercial, but the hope is that people will enjoy them if they feature characters from the show and seem like a companion piece to the series. The idea is to catch people off guard and make them laugh.

It's all because of costume dramas.

"We have a lot of dramas that are really popular in China that are set in ancient times, but it's really hard for fashion brands and other modern brands to do product placement," says Jialu Yuan, general manager of drama marketing at iQiyi.

After all, you can't have characters from the Song dynasty using a smartphone app or drinking juice from plastic bottles...or can you?

Last year, clients, producers and iQiyi worked together on an idea. What if, for each episode of a costume drama, you could include a standalone scene where a brand or product appeared in an offbeat, anachronistic way that would get viewers talking? The series' production teams could prepare and shoot the commercials themselves, instead of creative agencies. Show producers already have the actors, costumes and sets.

iQiyi, which is backed by Chinese internet giant Baidu, adopted the tactic first and developed it into a commercial product when it broadcast the 1930s tomb-raiding adventure tale "The Mystic Nine" last year. The first batch of advertisers ranged from iQianjin, a peer-to-peer lending app, to PepsiCo, which showed characters chowing down on Lay's and gulping Pepsi.

The other major services, Alibaba Group's Youku Tudou and Tencent Holdings' video platform, have embraced the tactic too. At iQiyi, the cost for embedding one such commercial in an episode ranges from $150,000 to $530,000, depending on projected viewership, Yuan says.

A commercial, perhaps 30 or 45 seconds long, might appear once or twice but isn't repeated endlessly, as ads usually are, so it stays novel and seems like part of the content.

"People have gotten very resistant to a hard sell—they think this way is more entertaining, and it's a new way of seeing the characters from a show," says Alessandro Pang, associate business director of OMD China. "If you're watching 'Game of Thrones' you wouldn't want to see a shampoo ad pop up which is totally not relevant." But what if "Game of Thrones" characters get together to relax and crack open a modern-day beer? People might find that funny, he says. 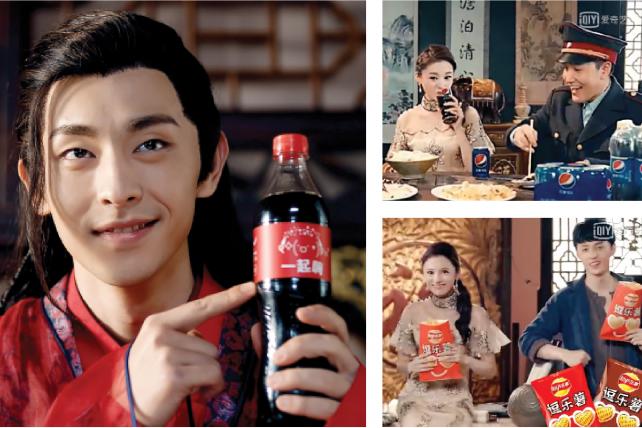 (Clockwise from l.) A character in 'Princess Agents,' set long ago, holds up a modern-day Coke bottle; and Pepsi and Lay's get ads in 'Mystic Nine.'

Driven by the model

China's powerful online video sites have a different business model than, say, Netflix or HBO. In the U.S., content has gravitated to subscription-based platforms that offer few or no advertising opportunities, presenting a conundrum for brands.

But in China, online video content is packed with brand messages, from product placement to brand logos that flash and spin on the screen. That's because Chinese platforms offer most content free; they had to start that way to lure people away from wildly popular pirated programming.

The platforms also offer VIP subscriptions, where for a few dollars a month viewers can subscribe to unlock extra content and skip interruptive ads.

But even the people who pay extra to avoid commercials see these new native video ads. There's no way to skip them—they're embedded in the show. That lets video platforms make more money, and it allows brands to reach everyone, including consumers with enough spending power to pay for subscriptions.

It also means viewers might have higher expectations for any brand messages that do appear.

"We have to make it interesting content so people are happy to see it," says iQiyi's Yuan. The ads are meant to feel like a standalone comedy skit inside the episode, or as Yuan describes it, "a little play inside the main show." On some shows, iQiyi even runs a little old-style theater curtain before the native video ads to announce that a commercial is coming, so people understand that what they're about to see isn't part of the storyline.

Though the trend started on period dramas, it has spread to other content, too. One iQiyi show, hip-hop singing contest "The Rap of China," interrupted the onstage action for a skit about McDonald's, a sponsor of the show. Funny enough, the McDonald's skit was in the historic past, and the rappers were clad in silk period costumes instead of the gold chains and sweatshirts they usually wear.

Coca-Cola has done other ads as well, including a campaign to promote bottles and cans featuring internet slant.

Producers "send scripts to us and we discuss with the clients," says Sonny Xu, Isobar media planning director for the Coca-Cola brand and Fanta, who worked on the ads. "Then there are several rounds of revision to get the scripts confirmed."

In addition to a big campaign for the packaging, with creative by McCann Worldgroup that featured singer-actor Lu Han, Coke put native video ads in both "Princess Agents" and another costume drama that aired online.

Another Coke scene in "Princess Agents," whose rights iQiyi bought from satellite channel Hunan TV: When a bodyguard pines for another character, someone suggests she confess her feelings with a bottle marked "521"—a declaration of love in Chinese internet slang.

"Chinese people are very shy to confess anything, and this product lets you do that," says Annie Zhang, the Isobar business director leading the sparkling beverage category for Coca-Cola.

The juxtaposition of the modern pop-culture references and period drama feels fresh and unusual for now. But this kind of thing probably won't work forever, Zhang says: "When it gets old, we will try something new."