Wants to Convene Debate, but Others Are Louder in Social Media
READ THIS NEXT
Crain Communications buys cannabis media firm
You don't buy The New Republic to become the next Facebook, Chris Hughes says.
Credit:

It's been two years since Facebook co-founder Chris Hughes bought an ailing New Republic and named himself publisher and editor-in-chief. It had stopped reporting its print circulation, premium advertisers had fled and digital readers were scant. In other words, it needed a rescue.

He started taking steps to broaden its audience, in print but especially across digital devices, without losing sight of the magazine's century-old heritage. "I want to support the kind of journalism that it's known for and convene a debate," he said recently.

The magazine's digital traffic has grown quickly since then, abetted by his decision to replace a paywall with a more permissive meter, and ad revenue has doubled. "They're carving out their niche in this interesting intersection between culture and politics," said Michael Haberman, senior partner, communications strategy director-global solutions, at media-buying firm MEC.

But the debate inspired by The New Republic remains quieter than you might expect after Mr. Hughes' experience not just with Facebook but the first Obama presidential campaign, where he led the social media effort, and the web's latest viral savant, Upworthy, where he was an early investor.

Meanwhile, competitors like The Atlantic push into the social conversation seemingly at will, through a combination of coverage including savvy quick hits and provocative cover stories such as "The End of Men" in 2010 and "Why Women Still Can't Have It All" in 2012.

The Atlantic has a head start in its digital pivot, while The New Republic started nearly from zero socially when Mr. Hughes came in. But it has been adopting similar strategies to an extent. "Part of the key for us has been to not only package the existing content to make it friendly for social and search, but also to think about the content itself that makes it something people want to share," Mr. Hughes said.

One recent story carried the headline, "The Tipping System is a Scam -- and Here are Six Ways to Game It." One of its most popular stories this year was on punctuation, titled "The Period is Pissed."

Duty to history
But the 30-year-old Mr. Hughes is a preservationist, casting his ownership of The New Republic as that of steward for the journalistic institution. He is supporting the magazine's mix of cultural and political commentary as much as he is building a media institution for the social and digital age. It's not, he said, a laboratory to apply every social-media lesson he's learned elsewhere.

"We have a duty to our history," Mr. Hughes said. "When you've been around 100 years, you feel a responsibility to be around for the next 100 years."

The New Republic, which is celebrating its centennial anniversary this year, has historically punched above its weight class, casting a shadow of influence over policymakers in Washington, D.C., despite its small circulation. It was also a talent farm for journalists. Mr. Hughes is helping restore that reputation, according to media executives, while widening its readership via social media.

"They need to strike a balance between in-depth reporting and up-to-the moment news," said Mr. Haberman.

Tapping social media to drive web traffic can arguably lead to subscriptions and help keep a publication on advertisers' radar. Media buyers say they admire The New Republic, where marquee advertisers include Boeing and Goldman Sachs, though it can easily fall off a media plan as budgets tighten, especially when other titles bring their larger assets to bear.

Competition for readers is also growing more intense as digital-media upstarts crowd The New Republic's category, according to Ken Doctor, a media analyst with Outsell. "Being regularly read and developing a regular readership -- and a paying readership -- gets harder and harder if operated within that narrow group," he said.

Mr. Hughes said he is intent on growing The New Republic's audience and turning it into a profitable business. "It would be remiss of me to not really invest where we have the opportunity to have the most influence, and that's across all digital properties," he said. 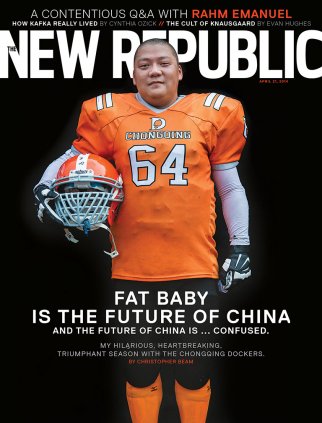 The magazine introduced a redesign in March 2013.

With a personal fortune reportedly in the hundreds of millions of dollars, Mr. Hughes has poured money into the title, doubling its editorial staff, opening a New York office with a growing business side and introducing a slick print and digital redesign.

Circulation has risen to 41,000 through the last six months of 2013 from about 31,000 a year earlier, according to its report with the Alliance for Audited Media, with the magazine returning to newsstands after a hiatus. (Mr. Hughes said he regularly peruses newsstands for The New Republic, snapping a photo with his phone when the magazine isn't where it should be.)

Its Facebook fans climbed 38% to 79,243 on March 5 from a year earlier, according to Brand Networks, which collects social media data on organizations. Engagement, or the percentage of people interacting with posts on the page, was about 4% during the two-week period leading up to Mar. 18. (The New Republic said its own measurements put engagement at 9.4%.) Twitter followers have doubled since last March, topping 86,000.

Facebook fans of The Atlantic, by comparison, grew by more than 300% to 728,651 in 2013 from 2012, according to Brand Networks, with an engagement rate of 12.6%. The website saw 7.5 million unique mobile and desktop visitors in the U.S. in January, according to ComScore. The company said on Monday that the first quarter was TheAtlantic.com's strongest yet for web traffic, attracting 16.6 million unique visitors in March, according to Omniture's measurements.

Mr. Hughes' time at Facebook and the Obama campaign have only marginally informed his ownership of The New Republic, he said. "This environment is rapidly changing," he said of social media. "If you think about the Facebook product now compared with when I was there, it's significantly different, particularly given some of the Facebook algorithm changes."

In December, Facebook tweaked its algorithm to show what it called "high quality" stories in users' feeds. Media outlets such as BuzzFeed, The Atlantic and Slate credited the change with a burst in Facebook referrals. Mr. Hughes said it was difficult to tell whether it affected The New Republic.

Still in the red
"The biweekly has always been in the mold of The Atlantic," said Steve Cohn, editor-in-chief of Media Industry Newsletter, in an email. "Chris Hughes' Facebook background and wealth could mean he will make The New Republic as digitally potent as David Bradley has made The Atlantic."

Atlantic ad sales in the first quarter were up 39% across all platforms year over year, it said. The magazine is also profitable, after years of losing money, according to former executives.

The New Republic is not yet profitable, Mr. Hughes said.

Profitability is a goal for The New Republic, but it's ultimately a "double bottom line" business, Mr. Hughes said. There's the social mission to support quality journalism, as well as the goal of making money.

"I don't think you get into traditional media to become the next Facebook," he added.