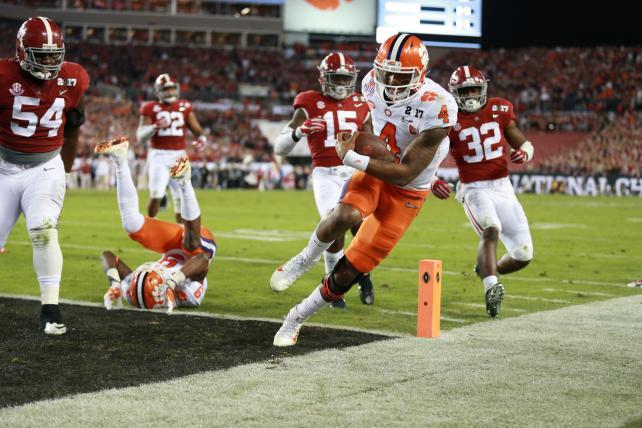 It was perhaps the most riveting college football title game since the fabled USC-Texas tilt in the 2006 Rose Bowl, and yet Monday night's bruising Clemson-Alabama thriller failed to make a dent in the record books.

Clemson's last-second (literally) come-from-behind victory over the Crimson Tide gave the Tigers their first national football title since 1981 and avenged their year-ago loss in Phoenix, and yet for all the excitement provided by Deshaun Watson and Co., the game's TV deliveries marked a low for a College Football Playoff National Championship Game.

According to Nielsen live-plus-same-day data, the Clemson-Alabama telecast averaged 26 million viewers across the ESPN portfolio, a tally that includes the 1.61 million fans who streamed the game via WatchESPN or tuned in for the various "Megacast" offerings on the linear TV offshoots ESPN2, ESPNNews and ESPNU. That marked the lowest turnout for a college football title bout since 25.6 million viewers watched Florida State edge Auburn 34-31 in the final BCS National Championship Game (2014).

The Clemson-Alabama rematch was the third championship battle waged under the College Football Playoff system. 'Bama's 45-40 victory of the Tigers in the 2016 title game averaged 26.7 million viewers when the Megacast and streaming numbers were blended with ESPN's linear TV average (25.7 million), falling well shy of the all-inclusive 34.1 million fans who watched Ohio State plaster Oregon by a score of 42-20 in the inaugural CFP championship.

Looking only at the flagship network's deliveries, ESPN last night averaged 24.4 million viewers and a 9.2 rating in its target demographic, which translates to a little over 11 million adults age 25-to-54. That marked a decline of 5% versus ESPN's year-ago average of 25.7 million viewers, although the demo remained unchanged.

When compared to the very first CFP title game, Monday's ESPN-only telecast was down 27% versus OSU-Oregon's 33.4 million and the dollar demo was off 21% from an 11.7 rating.

The most-watched national collegiate championship game in history was the aforementioned 2006 Rose Bowl, which scared up 35.6 million viewers on ABC. While OSU and Oregon got close to that high-water mark, a shrinking subscriber base and decreasing HUT levels suggest that ESPN may never come close to breaking its broadcast sibling's record.

Those factors (and an unconscionably protracted game) may have figured into Monday night's unexpectedly muted ratings. According to Nielsen, the number of homes using TV during the four-hour-and-sixteen-minute 'Bama-Clemson duel were down 8% compared to last year's broadcast, which translates into around 9.2 million fewer available households.

Moreover, ESPN itself is now available in fewer homes than it was a year ago. Nielsen's December cable universe estimates puts ESPN in 88.4 million U.S. households, which marked a net loss of 3 million subs over the course of the previous 12-month period.