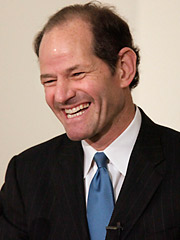 Eliot Spitzer
Credit:
AP
The concept is reminiscent of CNN's old "Crossfire" series, which let hosts including Bill Press, James Carville, Pat Buchanan, Geraldine Ferraro, Robert Novak and John Sununu take whacks at each other depending on their political stripe and lasted from 1982 to 2005. By its end, it had begun to lose ratings , and was even the target of an attack from comedian Jon Stewart, who used his appearance as a guest on the show to denounce political back-and-forth among the hosts as "partisan hackery." CNN canceled the show not long after. "I agree wholeheartedly with Jon Stewart's overall premise," Jonathan Klein, president of CNN's U.S. operations, said at the time..

Before and since that show's demise, however, programs featuring such personalities as Bill O' Reilly and Sean Hannity on Fox News Channel and Rachel Maddow and Keith Olbermann on MSNBC have gained ratings traction -- each viewing events of the day through a single political lens.

With that in mind, CNN thinks its old show concept might stand out in a new way. "Other cable news channels force-feed viewers one narrow, predictable point of view," said Mr. Klein.

The cable channel has seen ratings for its prime-time lineup suffer, even as executives have maintained its content should emanate from a more middle-of-the-road philosophy, presenting news events from an objective point of view.

Starting this fall, the new 8 p.m. program will lead into "Anderson Cooper 360" at 9 p.m., then "Larry King Live" at 10 p.m. -- if there's no change to Mr. King's slot. Mr. King's program has been the subject of much speculation in recent weeks, particularly as ratings have fallen and the venerable host appears less able to pose challenging questions to his guests. The previous host of CNN's 8 p.m. hour, Campbell Brown, recently said she would leave the network.

Mr. Spitzer's appearance is likely to raise eyebrows. As governor, he told an opponent he was a "steamroller" who would "roll over you or anybody else." But he stepped down instead after it was discovered he had been having sex with prostitutes. His participation in the program might be viewed as an attempt to rehabilitate his political career.

Indeed, hosts of the old "Crossfire" series often shuttled between hosting the show and taking part in government or campaigning.