CNN sues Trump over White House ban of its correspondent 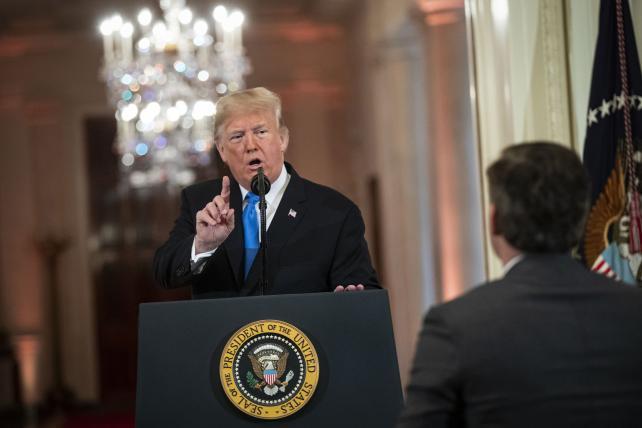 A long-simmering battle between President Donald Trump and CNN escalated Tuesday with the cable news network suing Trump and his top aides over the revocation of press credentials of its correspondent Jim Acosta.

The unusual step taken by CNN seeks the immediate return of Acosta's pass, which was revoked after a tussle between the correspondent and a White House aide. The aide tried to take a microphone away from Acosta as he persisted in asking questions of Trump at a press conference last week. Trump has called the AT&T Inc. unit "fake news" and frequently disparaged Acosta.

"This is just more grandstanding from CNN," White House Press Secretary Sarah Sanders said. She added that Acosta had "physically refused to surrender the White House microphone" and that "this was not the first time this reporter has inappropriately refused to yield to other reporters."

Previously, Sanders justified the decision by accusing Acosta of "placing his hands" on the White House staffer. That claim was disputed by many of Acosta's fellow White House reporters. In its lawsuit, CNN accused Sanders of sharing a video of the incident that "was apparently doctored" and had originated with InfoWars, an organization known for spreading conspiracy theories.

CNN's lawsuit threatens to throw its owner, AT&T, and the Trump administration back in court just months after the two sides squared off before a judge over whether AT&T can buy Time Warner. AT&T won the case, though the Justice Department has appealed the decision.

The White House revoked Acosta's pass that allows him unescorted on the White House grounds. Without his press credentials, Acosta's ability to perform his job as White House correspondent "is effectively eliminated," CNN said in its lawsuit.

"While the suit is specific to CNN and Acosta, this could have happened to anyone," CNN said in a statement. "If left unchallenged, the actions of the White House could create a dangerous chilling effect for any journalist who covers our elected officials."

The news network also filed a request for a temporary restraining order that would require the White House to immediately restore Acosta's credentials while the lawsuit for permanent reinstatement is pursued.

"Otherwise, what's the criterion for pulling someone's press credentials?" Stephenson said. "You didn't like the line of questioning? Well, that kind of seems to violate our protections of the freedom of press.''

The White House Correspondents' Association said in a statement that it supports CNN.

"The President of the United States should not be in the business of arbitrarily picking the men and women who cover him," WHCA President Olivier Knox said in a statement on Twitter.

The American Civil Liberties Union also chimed in on Twitter, saying "It shouldn't take a lawsuit from CNN to remind the president of the First Amendment."