Can Comics Save the Day for Brands? | Ad Age
Skip to main content

Can Comics Save the Day for Brands?

Honda, Others Head to Previously Uncool Ad Space to Reach Legions of Young-Male Readers
READ THIS NEXT
More-subdued presidential debate sees drop-off in TV viewers
Comic books are luring men in their 20s and 30s, some nostalgic for the hobby of their youth.
Credit:

NEW YORK (AdAge.com) -- It sounds like the plot of a superhero story. On the hunt for an elusive target -- young male consumers -- media buyer Sharon Enright struggled to find the right ad venue for her client, Honda. A wrong move could mean money ill-spent. As it happens, Ms. Enright discovered a place largely untapped by the auto industry: comic books. 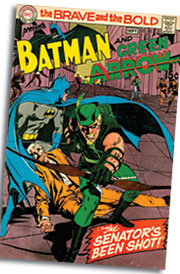 Comic books are luring men in their 20s and 30s, some nostalgic for the hobby of their youth.
Since Honda's 2005 debut in comics published by Marvel Entertainment, other automakers have made appearances. Chrysler's Dodge was tucked into panels in comics published by Marvel, and GM's Pontiac figured prominently in a comic crafted by Time Warner's DC Comics. Honda has continued as well. "In the past, advertisers have been kind of slow to come around to this audience, because it may have been looked at as uncool," said Ms. Enright, VP-associate media director at Honda's agency, RPA.

Once a veritable haven for kitschy favorites like Sea Monkeys, trick gum, and muscle-building courses from Charles Atlas, comic books have grown up. Savvier marketers with bigger budgets have arrived in the last several years, including Campbell Soup, the Army and AT&T, along with movie studios and video-game makers. The comic-book industry's $32 million in annual ad sales (newsstand sales bring the larger part of revenue) are set to grow, said Gordon Hodge, an analyst with Thomas Wiesel Partners, particularly as publishers start moving online.

Keeping up with readers
For decades, comic books were strictly for kids. Now the colorful periodicals are luring men in their 20s and 30s, some nostalgic for the hobby of their youth. The adventures today are grittier, and the heroes more prone to take tougher choices, like stabbing one villain in the eye with an arrow or performing a sort of magical lobotomy on another. "The culture has changed," said Paul Levitz, president of DC Comics. In the late 1980s and '90s, "advertisers realized that comic books were delivering a significantly older audience: adults and college kids."

With that bigger profile, however, comes more pressure to help advertisers stand out where colorful characters with names such as Green Arrow and Dr. Strange are the order of the day. "The brand wants to be a superhero just as much as the editorial," said Beth Fidoten, senior VP-director of print services at media agency Initiative. "The brand doesn't want to be overpowered by the superhero."

Indeed, outlandish graphics are now the norm in comic-book ads -- one recent video game ad boasts a four-eyed creature staring out at the reader. Advertisers are pushing for bolder ideas, said Bob Sabouni, VP-business development for Marvel's publishing group, but "our whole existence is being creative." One comic-book reader warns against letting the ads become overwhelming. Since young men are notoriously ad-resistant, "the loudness of [the ads], the obtrusiveness of them, is likely to continue," said Kelly O'Keefe, director-executive education at Virginia Commonwealth University's Adcenter.