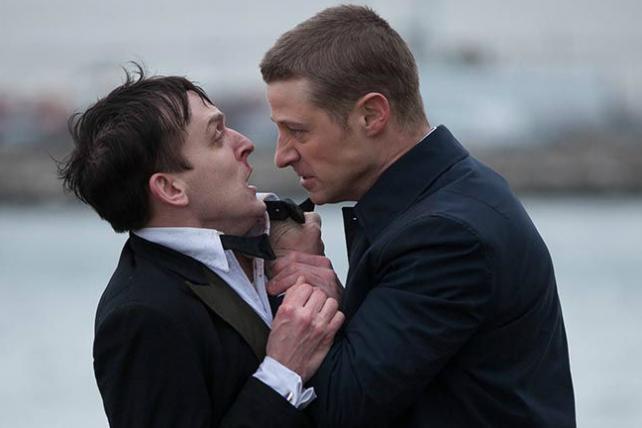 A young Jim Gordon threatens the man who will become the Penguin in the first episode of 'Gotham.'
Credit: Fox

The premiere of Fox's "Gotham" saw a big ratings bump between its initial airing and its first three days of delayed viewing, but the first batch of Nielsen's "C3" ratings this fall also suggest that time-shifted TV is also still largely marked by ad-skipping.

During the first official week of the 2014-15 broadcast TV season, Sept. 22 through Sept. 28, the average live-plus-same-day rating for all 58 first-run prime-time shows on the Big Four networks was a 2.4 among adults 18 to 49 years old, according to data provided by a Nielsen researcher. Given that a ratings point represents 1.27 million members of the coveted demographic, a 2.4 rating equals just under 3.05 million viewers in that age range.

When the three days of commercial deliveries were factored in, the Week One average inched up just 5%, to a 2.5 rating. In other words, despite all the marked increases the networks are touting with their time-shifted program ratings, the evidence continues to show that viewers who "catch up" via their DVRs are usually zipping through the ads.

It's not surprising that the C3 ratings are roughly even with the live-plus-same-day numbers, the ratings that are generated the afternoon after any given air date. The two data streams have been more or less congruent since the C3 currency was first adopted in 2007.

But a handful of shows did improve significantly, including new shows that already performed well on the day they aired. They were also the biggest draws on VOD, a platform that effectively assures commercial impressions by making it impossible for the viewer to fast-forward through the spots.

Fox's Batman origin story "Gotham" soared from its initial 3.3 rating to a 4.2 in C3, gaining nearly an entire ratings point in playback mode for an almost unheard-of increase of 27%. Not coincidentally, "Gotham" was also the No. 1 VOD program in Week One on Comcast's Xfinity On Demand platform.

Other shows that saw lifts well above the average 0.1-point increase include ABC's "How to Get Away With Murder," which jumped to a 4.5 rating in the 18-to-49-year-old demo from a 3.8, and "Black-ish," which improved to a 3.8 from a 3.3. (It's worth noting that ABC's live-same-day ratings reflect Nielsen's Oct. 11 restatement of the network's seasonal deliveries.)

Some of the shows that grew the most on a percentage basis still showed rather underwhelming results overall. While Fox's swoony teen hospital drama "Red Band Society" improved 27%, for example, the shift from to a 1.4 from a 1.1 in the key demographic isn't going to keep the show off life support.

Of the 20 broadcast series that improved the most on a percentile basis in Week One, eight were ABC shows. Fox had six shows on the list, CBS had four and NBC had two. That said, NBC boasts two of the programs that are most watched live and without the intervention of a digital time machine: "Sunday Night Football," unchanged at an 8.8, and "The Voice" at 4.0.