As for Conan, He Who Laughs Last... | Ad Age
Skip to main content

As for Conan, He Who Laughs Last...

O'Brien's Move to TBS Seen as Early Success for Viewers and Advertisers
READ THIS NEXT
From News Scoops to Buzzer-Beating Hoops, Live TV Continues to Deliver

NEW YORK (AdAge.com) -- Conan O' Brien looks to be having the best laugh.

After all the hype and months of speculation over Mr. O' Brien's move from NBC to cable's TBS, the late-night "Conan" show is being viewed as an early success with both viewers and advertisers, and in fact, could change the dynamic of the late-night ad marketplace. "He's bringing in really young viewers. The median age is over 20 years younger" than that of people who tune in to rival shows on broadcast, said Amy Sotiridy, senior VP-director of national broadcast at Interpublic Group's Initiative.

Mr. O' Brien's first show drew around 4.2 million viewers, nearly 3.3 million of which were between the coveted ages of 18 and 49, according to Nielsen. Based on early results provided by TV networks, the debut episode of "Conan" did better than the normal airings of "The Tonight Show with Jay Leno" on NBC, "The Late Show With David Letterman" on CBS and "The Daily Show" and "The Colbert Report" on Comedy Central. Mr. O' Brien's numbers started to dip as the week progressed. His second show reached about 2.8 million viewers on Tuesday (2.1 million between 18 and 49) and his third reached about 2.7 million viewers Wednesday (1.86 million between 18 and 49).

Ad buyers suggest the success of "Conan" won't make them abandon broader-skewing late-night offerings on NBC, ABC and CBS, but the new show does put another option in front of them that could draw important ad dollars away from those places. In other words, the show's launch has them thinking about how to parcel out ad spending among various audiences -- a notion that would never have held sway when Johnny Carson sat on this timeslot's throne.

The successful launch "really changes the dynamic of the late-night day part in terms of what the priority programs are," said Jay Baum, executive VP-director of national buying at Deutsch Inc. Over the years, he added, late-night audiences on broadcast "have gotten older and the ratings have come down. Now you have all these high-profile programs on the cable landscape that are skewing younger." 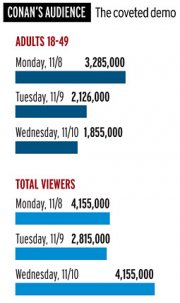 Early viewership for "Conan" doesn't indicate the normal performance for the show. For that, ad buyers say, they'll likely wait several weeks to see how audience patterns settle. Some portion of the first week's audience is tuning in out of curiosity, they suggested, not because watching Mr. O' Brien is a long-developed habit.

And rivals are watching. At Viacom's Comedy Central, the consensus is that "The Daily Show" and "The Colbert Report" have a tie to popular culture that is "unparalleled," said Steve Albani, senior VP-corporate communications, Comedy Central, so that "once the dust settles and the sampling is over, we're confident that our guys will be doing just fine."

With the first results out, however, ad buyers believe Mr. O' Brien's program will provide another place for marketers to find their most elusive quarry: young men. "The truth is, for the data that is there, it's looking good," said Elizabeth Herbst-Brady, president at Interpublic Group's Magna Global.

The host's new backer, Time Warner's Turner cable unit, sees early positives. "Premiere night and premiere week were sold out back in October, with very strong demand throughout fourth quarter and into first quarter," said Turner spokeswoman Jennifer Toner, via email. Advertisers who aligned themselves early with "Conan" included AT&T, which not only ran ads during the first week of the show, but sponsored a promotional "Conan" blimp that appeared during TBS's recent telecasts of post-season baseball. AT&T declined to comment on Mr. O' Brien's first-week performance.

Establishing Mr. O' Brien's value is crucial to Turner. The cable unit has been adding to its programming lineup, part of a broader effort to give advertisers fare that attempts to mimic broadcast's reach at more attractive prices. Turner has added several dramas to its TNT network, snatching up cult-favorite cop show "Southland" after NBC dropped it last year, for instance, and launching programs such as "Rizzoli & Isles" and "Men of a Certain Age" to complement its long-running "The Closer." More importantly, Turner also formed a joint effort with CBS to show a good chunk of the NCAA men's basketball championships across its many cable outlets.

To work, "Conan" doesn't have to reach the most viewers -- just a good portion of the ones marketers want so badly. Mr. O' Brien's first week of programs reached an audience with a median age of 32, Turner said in a statement Friday. The first week of "Conan" averaged around 1.5 million adults between the ages of 18 and 34, about 2.2 million adults between 18 and 49, and around 2.9 million viewers overall.

The host and the network clearly made outreach to marketers early in their launch efforts. Last week, News Corp.'s 20th Century Fox ran ads for its "Unstoppable" action movie that mentioned the host by name. General Motors is expected to use "Conan" to promote its Chevrolet Cruze the week of Nov. 15, with details likely to be announced during the show. Microsoft's Bing search engine and AT&T are expected to be featured with the program in the near future, according to a person with knowledge of the matter.

In his first week, Mr. O' Brien made plenty of swipes at his diminished roost on cable, and these are likely to continue. "We've been having a great first week here at TBS," he said in his monologue on Thursday night's show. "But if this doesn't work out, you can catch me next fall on my new VH1 show, 'Coning for Love.'"