Conde Nast Gives Up on Portfolio

NEW YORK (AdAge.com) -- Conde Nast dropped a long-anticipated ax on Conde Nast Portfolio this morning, shutting down the expensive, ambitious effort to build a business magazine with a stylish presentation. The move affects more than 85 employees, already down from a peak of 140 after a retrenchment last November, including Editor in Chief Joanne Lipman and Publisher William Li, who are both leaving the company. 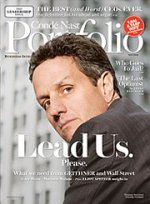 The last issue of Portfolio is on newsstands now.
Conde Nast is closing the Portfolio.com website as well, although there are discussions inside the company about eventually reviving it in some way. The last issue is the May issue out now.

David Carey, the group president and publishing director who launched Portfolio two years ago, called the decision to give up an agonizing one.

"I just left the staff meeting," he said. "This is a business that we have liked being in. We are proud of the product, which is nominated for three Loeb Awards [for business and financial journalism]."

The economy's collapse, however, cut both ways -- ultimately for the worse. It heightened interest in the economy, but it also submerged five categories of advertising on which Portfolio depended: financial services, corporate branding, business travel, auto and luxury.

"Even if the economy starts to recover, it's likely the advertising is going to lag it," Mr. Carey said. "The gap between where we needed the business to be in 2010 and 2011 proved to be too large."

The Portfolio team
Although Ms. Lipman in particular received regular criticism on blogs such as Gawker and in the pages of the New York Post, Mr. Carey said he admired the Portfolio team, which at one time included a raft of famous writers.

"They've had to labor with a new product in a very challenged environment. We're very proud of what has been accomplished in only 21 issues."

The magazine's debut issue exemplified the tone Portfolio strove to adopt, weaving business coverage, and ads, together with fashion and lifestyle content, and ads. A two-page spread on a diamond company CEO pictured her posing in a strapless emerald silk chiffon gown, complete with fashion credits. Cover stories included "The New Masters of the Universe" by Tom Wolfe and "A Tiger Woods I.P.O?" by Michael Lewis. The tone, however, lost some of its appeal as the global economy fell from its more pleasurable plane to a state of emergency.

Advertisers, meanwhile, were compelled to cut all but their most important magazines. Conde Nast meant the November cutbacks to "weatherproof the model at least for this year," as Mr. Carey put it today, but they couldn't save the book. Portfolio's ad pages from January through the April issue fell 61% from the period a year earlier, which included one more issue, according to the Media Industry Newsletter. Most magazines suffered but not nearly that much. Ad pages for monthlies fell 22% from January through April.

One media buyer said the launch, which most recently reported average paid and verified circulation of 449,000 copies, would have had a good shot absent such a powerful recession. "I think if it launched 10 years ago it would have been a slam dunk," said George Janson, managing partner and director of print communications at Mediaedge:cia. "I also commend Conde Nast for investing in a magazine and trying to create a new genre. So I'm kind of disappointed because I would have liked to see them stick with it. But I also understand from a business standpoint. It's a sad day for the industry."

The industry also probably won't try again to take 600 days on a launch, roughly the amount of time Conde Nast spent designing the book, assembling a team of high-profile journalists and trying to build excitement among advertisers. "I don't know that we're going to see a launch that's two years in the making again," Mr. Janson said. "I think the launches will be quicker to market and quicker to pull the plug."

Some advertisers will regret losing Portfolio. "Some will miss it," Mr. Janson said, "because it added a different dimension to our plans. They combined hard-hitting features with more lifestyle as opposed to just more of the hard-hitting business you can get online right now."

Conde Nast has shown its willingness to shut down titles especially once the recession began, closing Domino in January, Men's Vogue last October and Golf for Women last July. But Portfolio represented a huge commitment: Conde had planned to spend some $100 million over five or six years to support the launch. "This was a business that had an enormous amount of pride within the executive levels of the company," Mr. Carey said.