After 'Sex and The Single Girl,' Fomented Newsstand Revolution
READ THIS NEXT
Billie Eilish stars in a gorgeous rallying cry for the ‘generation that lives online’

Helen Gurley Brown, who brought new thinking to the so-called women's magazine by endowing Cosmopolitan with some of the counterculture sentiment of the 1960s, died Monday, according to Hearst Corp., the magazine's publisher. She was 90. 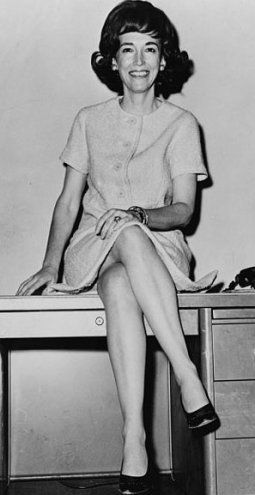 Ms. Brown spent more than three decades at the helm of "Cosmo," a perch to which she ascended after publishing the 1962 book "Sex and the Single Girl." Under her aegis, Cosmo developed into one of the leading chronicles of the sexual revolution. Ms. Brown often preached the virtues of pre-marital sex and pushed back against the notion that women needed to have a marriage to feel fulfilled. "Good girls go to heaven," she was fond of saying, but "bad girls go everywhere."

Ms. Brown was born in Green Forest, Ark., on February 18, 1922, to Ira and Cleo Gurley, two school teachers. Her father died in an elevator accident when Helen was 10 years old. Her mother moved Ms. Brown and a sister to Los Angeles in the late 1930s.

She spent a year at the Texas State College for Women before returning home to put herself through Woodbury Business College. Her mother and sister, who both suffered from polio, required her aid for the rest of their lives. In 1941, armed with a business degree, Ms. Brown took on a series of secretarial jobs.

But it was a job at the Foote, Cone and Belding ad agency that moved her into position for future success. She became executive secretary to Don Belding, and the wit evidenced in her notes prompted both her manager and his wife to suggest she try writing ad copy. By the late 1950s, she had become the highest-paid female copywriter on the West Coast.

In 1959, at 37, Ms. Brown married David Brown, 43, then a film executive at 20th Century Fox Studios, and later an independent producer. He became a partner in many of Ms. Brown's projects, even writing Cosmo cover lines. He also persuaded her to write a book about her life as a single woman, titled "Sex and the Single Girl." The tome was a cultural phenomenon.

The pair worked together to keep the budding author in the spotlight. Ms. Brown wrote a syndicated advice column for newspapers. The two pitched an idea for a a magazine called Femme to Hearst, which responded with an offer to let Ms. Brown try to revive Cosmopolitan, first launched in 1886 as a family magazine. The title transformed itself into a literary magazine in the 1940s, then began to experience circulation declines as consumers began to favor magazines devoted to niche topics over those aimed at the mass market.

Under her leadership, Cosmopolitan began featuring sexy cover models and more provocative content, all in an effort to appeal to younger women. Ms. Gurley Brown began to make frequent appearances on NBC's "Tonight Show" and in the 1980s had a weekly spot on ABC's "Good Morning America." She even briefly hosted a program on the Lifetime cable channel.

Of course, nothing lasts forever. In 1997s, seeking new leadership at Cosmo, Hearst ousted her from her role at the magazine, replacing her with Bonnie Fuller.

But Ms. Gurley Brown still had work to do. She spent many years as the editor of Cosmo's international editions, offering advice to the editors of Cosmo counterparts around the world. While the editors were not required to take her advice, she said in an interview with Dow Jones Newswires in 2000, they ought to "because it works."

Ms. Brown always liked to keep busy, and, perhaps with her earlier days in mind when she had to support a mother and sister, always liked to have a job. She wrote 11 books in all. In 1986, the Hearst Corp. established a chair at Northwestern University's Medill School of Journalism in her name, the Helen Gurley Brown Research Professorship.

Last January she gave $30 million to the graduate school of journalism at Columbia University and the engineering school at Stanford University to create a center for media innovation.

"Work has always rewarded me. Work is my drug of choice," she told Dow Jones Newswires in the 2000 interview. "I always wondered: Who would want to have lunch with me if I didn't have a job?"