'Courage for Violence, Thanks to Donald Trump': A German Newspaper Responds to Charlottesville | Ad Age
Skip to main content

'Courage for Violence, Thanks to Donald Trump': A German Newspaper Responds to Charlottesville

First I'll direct your attention to my colleague Angela Doland's Ad Age Wake-Up Call post from early this morning for her digest of some big media and marketing developments (including Shonda Rhimes' move to Netflix after 15 years of making hit shows for ABC). As for the other interlinked stories that continue to grip the global media, well, let's get started ...

1. Helpful: "A timeline of the deadly weekend in Charlottesville, Virginia," via WLS-TV, the ABC affiliate in Chicago. It begins in February of this year with "The Charlottesville City Council votes to remove a statue of Confederate war hero Robert E. Lee."

The bigoted mayhem that gripped Charlottesville is a moment made for a new president. A moment when he gets to prove to the electorate that it was right to entrust national leadership with him. A moment to unite and start the healing. Instead, President Trump unleashed his "on many sides" nonsense. [See: "Trump condemns Charlottesville violence but doesn't single out white nationalists," also from the Post.]

+ How has White House-favorite alt-right site Breitbart News responded to Trump's response? With this story: "Bishop E.W. Jackson on Charlottesville: 'I Condemn Both Sides … Both Sides Want Us Divided Racially'."

It's almost impossible to get Donald Trump to criticize one of his supporters. Last March, when former Ku Klux Klan leader David Duke supported his campaign, Trump initially declined to disavow him and at one point blamed "a bad earpiece" for his failure to do so. A couple weeks later, when a Trump supporter punched an African-American man at a stadium rally, Trump said the man "obviously loves the country" and suggested he might pay his legal bills. ... One reason for Trump's mystifying refusal to criticize the alt-right racism in Charlottesville is that he came under similar pressure during the campaign, didn't buckle, and still won the election.

+ "Nearly everyone around Trump is being more critical of Charlottesville than he is," per the AP's Jonathan Lemire (via Business Insider). 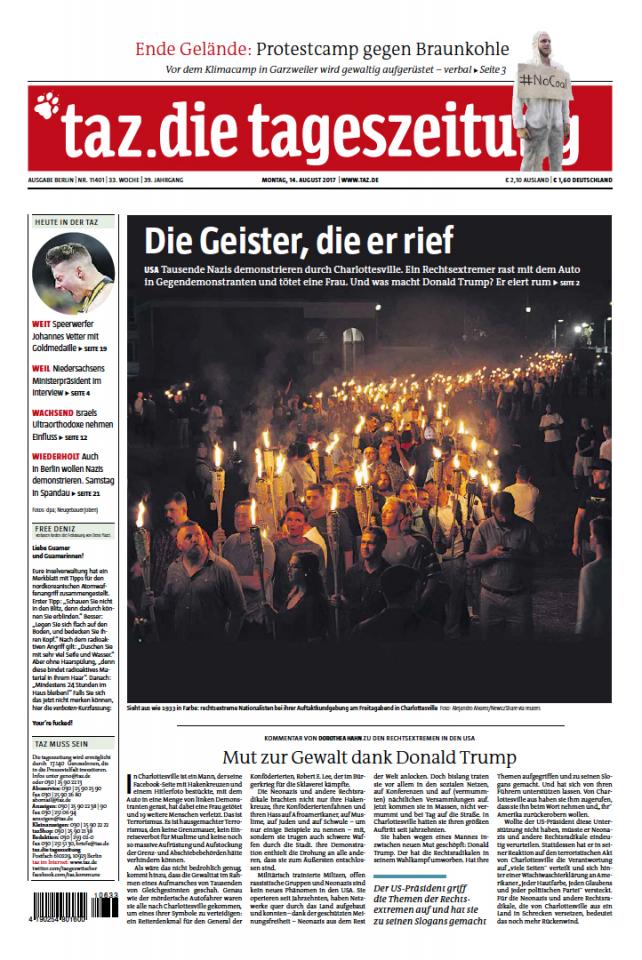 5. Germany's Die Tageszeitung (The Daily Newspaper) this morning leads with a headline, "Die Geister, die er rief" ("The spirits that he called"), above a photo of the Charlottesville alt-right rally. Below that, in an editorial headlined "Mut zur Gewalt dank Donald Trump" ("Courage for violence, thanks to Donald Trump"), Dorothea Hahn writes,

Racist groups and neo-Nazis ... now have new courage because of one man: Donald Trump. He has courted the right-wing radicals in his election campaign. Has taken up their topics and made them his slogans. And has been supported by their leaders. ... If the US president did not want this support, he would clearly have to condemn neo-Nazis and other right-wing radicals. Instead, in his reaction to the terrorist act of Charlottesville, he has distributed the responsibility to "many sides" and hid behind a wishy-washy declaration to Americans of "every skin color, every belief and political party." For the neo-Nazis and other right-wing extremists ... this means even more wind at their backs.

7. And finally, I leave you with this: "'Nazis are like cats. If they like you, it's probably because you're feeding them" --John Oliver on HBO's "Last Week Tonight" last night: