NBC on Pace to Beat Fox News in the Demo 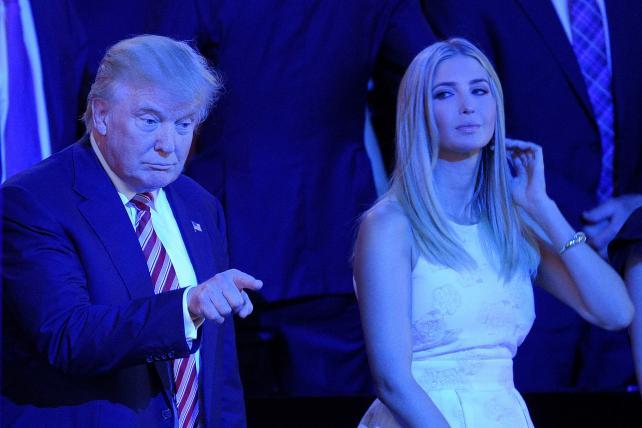 Republican presidential candidate Donald Trump gestures as Ivanka Trump looks on during the third night of the Republican National Convention on July 20, 2016, at the Quicken Loans Arena in Cleveland.
Credit: Jeff Swensen/Getty Images

According to Nielsen live-plus-same-day data, Wednesday night's convention coverage averaged 22.8 million viewers across ABC, CBS, NBC, Fox News Channel, CNN and MSNBC, up 15% versus the 19.8 million viewers who watched the corresponding night of the 2012 confab. In aggregate, the six networks posted a 5.7 rating in the news demo, which translates to around 6.65 million adults 25 to 54, up 8% compared with the 5.2 rating/6.18 million viewers who tuned in four years ago.

Deliveries also were up versus the previous night, which averaged 19.4 million viewers and 5.68 million demographically apposite viewers, or a 4.8 rating.

As has been the case since the convention began, NBC last night topped Fox News Channel in the all-important news demo, drawing 1.77 million adults 25-to-54 to the cable network's 1.72 million. Over the course of the first three nights of the event, NBC has averaged 1.66 million adults 25 to 54, up 1% compared with the analogous time frame four years ago, while Fox News remains in second place with 1.5 million targeted viewers, down 17%.

Sen. Cruz's brazen refusal to endorse ("vote your conscience") the man who earlier this spring accused his father of being involved in the assassination of President John F. Kennedy set off a chorus of boos and pushed Gov. Pence's speech back to 10:40 p.m. EDT. Twitter went predictably nuts -- 10,600 Cruz-related tweets were sent in the 60-second interval after the senator got himself booed off the stage -- and while this week was supposed to be all about Donald J. Trump, the senator from Texas hijacked the narrative. On Wednesday night, #TedCruz was a trending topic; the presidential candidate was not.

Commercial loads during Wednesday night's convention coverage were even more sparse than they were during the first two evenings, as ABC, CBS and NBC together aired just 13 paid-for spots. Pharma once again ruled the roost thanks to buys from Pfizer, GlaxoSmithKline and Novartis, while three movie ads also were in the mix. Universal Pictures promoted the upcoming (July 29) "Jason Bourne" and "The Secret Life of Pets" on ABC, and Columbia Pictures looked to get another big weekend out of its "Ghostbusters" reboot with a 15-second spot on NBC.

Tonight marks the fourth and final night of the RNC, and political junkies and thrill seekers alike are expected to tune in to see how Mr. Trump approaches the single biggest moment of his campaign. (It's hard to imagine that the impulsive real estate tycoon will pass up the chance to eviscerate "Lyin' Ted" in front of a national TV audience that should top 30 million viewers.) After addresses from the likes of RNC chairman Reince Preibus and venture capitalist Peter Thiel, Mr. Trump will close out the convention with a speech that will air in the final hour of primetime. The candidate will be introduced by his daughter Ivanka.