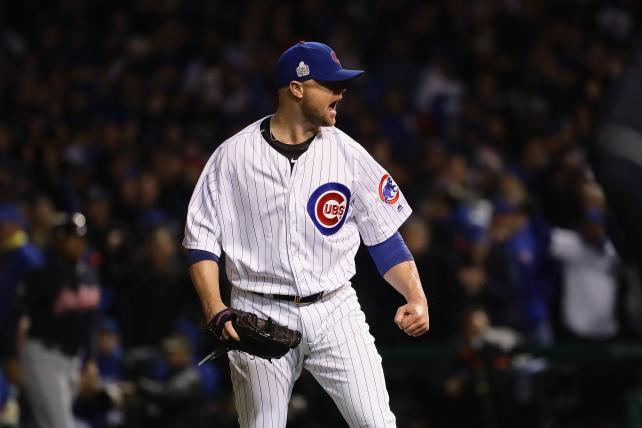 Jon Lester of the Chicago Cubs reacts after pitching in the fifth inning against the Cleveland Indians in Game 5 of the World Series at Wrigley Field on Sunday.
Credit: Jonathan Daniel/Getty Images

Game 5 of the 2016 World Series tore through its Sunday night competition like a buzzsaw, drawing the biggest audience for the fifth frame of a Fall Classic in nearly two decades while leaving TV's two highest-rated primetime shows choking on the sawdust.

According to Nielsen live-plus-same-day data, the Chicago Cubs' 3-2 win at home over the Cleveland Indians delivered 23.6 million viewers, making it the most-watched Game 5 broadcast since the Marlins and Indians drew 24.2 million viewers to NBC back in 1997. Sunday night's nail-biter also notched a 13.1 household rating, making it the highest-rated Game 5 since the Marlins and Yankees drew a 13.2 rating in 2003.

Through the first five games of the Cubs-Tribe series, Fox is averaging a 5.3 rating in its target demo, which translates to 6.8 million adults 18 to 49. That adds up to a 23% improvement versus the 4.3 demo rating Fox has averaged over the course of its previous 10 World Series.

As is to be expected with baseball, older males account for the biggest slice of the World Series' demographic pie. Per Nielsen, the first five games of this year's MLB showcase delivered a 12.9 rating among men age 50 years and up, trailing only the 2009 Phillies-Yankees series (13.0) for dominance in the Cialis demo. That said, Fox is seeing a significant uptick in younger males, averaging a seven-year-high 4.9 rating among men 18 to 34, up 36% compared to last season's Mets-Royals series (3.6).

All told, the median age of the audience that tuned in for the first five games of the series is 54.2 years, which marks a slight decline from last year's 54.6 years. Fox hasn't dropped south of the half-century mark since Boston's sweep of Colorado in the 2007 series drew an audience with a median age of 49.9 years.

In forcing a Game 6, the Cubs all but ensured a huge turnout for tonight's broadcast, which faces very little in the way of national sports competition, unless you count the Mid-American Conference battle between Western Michigan and Ball State on ESPN2. A competitive ballgame could draw as many as 27 million people to Fox, which is on track to book more than a quarter-billion dollars in World Series ad sales revenue. And if the Baseball Gods are truly benevolent and a seventh game is in the cards, there's no reason to think that the final frame on Wednesday night wouldn't deliver as many as 35 million viewers. (For the sake of comparison, the most-watched Game 7 in the last 20 years was the 2001 Yankees-Diamondbacks clincher, which drew 39.1 million viewers.)

Sunday-night pile-up
Always overstuffed with premium programming options, last Sunday night's schedule was one of the most glutted in recent memory. While the Cubs were keeping the dream alive in Wrigleyville, NBC countered with a matchup between the top-rated NFL franchise, the Dallas Cowboys, and their NFC East rivals the Philadelphia Eagles. Knotted at 23-all at the end of the fourth quarter -- Dallas dispatched Philly in overtime on a 5-yard touchdown pass from rookie phenom Dak Prescott to veteran tight end Jason Witten -- "Sunday Night Football" averaged just under 18 million viewers and a 10.2 household rating, tying the previous week's Seahawks-Cardinals game as NBC's sixth lowest-rated NFL broadcast of the season.

Season-to-date, NBC's primetime NFL window is averaging 19.5 million viewers and an 11.1 household rating, down 18% and 20% respectively, versus its year-ago 23.7 million/13.8 household rating.

Also feeling the bite was TV's No. 1 scripted series, "The Walking Dead." After putting up near-record deliveries with its season-seven premiere (17.0 million viewers and an 8.4 rating among adults 18 to 49), the zombie apocalypse drama returned down 26% in total viewers (12.5 million) from the premiere and off 27% in the demo (6.1). While that marked the series' largest drop-off for an episode immediately following a season premiere, it's worth noting that no other scripted series can lay a glove on AMC's zombie-apocalypse strip. The nearest runner-up, Fox's "Empire," is averaging a 3.7 in its target demo in live-same-day and around a 4.5 in the C3 ratings that TV's ultimate currency.

If baseball took a few whacks at "The Walking Dead," ABC's already-compromised Sunday night lineup all but vanished into thin air. Not only did the network go fractional in Sunday prime, averaging a meager 0.7 rating among adults 18 to 49, 30% below its season-to-date average on the night, but the show that once seemed poised to be a breakout hit now appears to be on the verge of existential collapse. "Quantico" skidded to a 0.6 in the demo, bringing its season average down to an unsustainable 0.8 and making it the lowest-rated scripted show on ABC's schedule.

Without the benefit of a late NFL lead-in, CBS's three-hour drama block also took its lumps, as "NCIS: Los Angeles," "Madam Secretary" and "Elementary" together saw their deliveries of adults 25 to 54 drop 24% from the levels they hit the previous week. CBS' Sunday night roster next week could get a lift from a late national (4:20 p.m.) showdown between the NFL's third-largest TV draw, Green Bay, and the mid-tier Indianapolis Colts.

The back end of CBS' upcoming NFL doubleheader will mark the Packers' sixth national TV window in nine weeks. Season-to-date, only the Cowboys have been featured in as many marquee broadcasts.