On this or any other planet, there remains no greater source of inadvertent humor than local newscasts. Non-specific teases about hostage situations at local day-care centers ("we'll tell you which ones, after the break"), tripartite weather segments in which the long-term forecast isn't delivered until 53 minutes past the hour, and "Shame Shame Shame! You Took That Family's Hard-Earned Money And Didn't Install The Silent Canine Perimeter Fence Like You Promised! J'accuse!" features in which a marauding reporter outs scammers -- these are why I watch the 10 p.m. news. 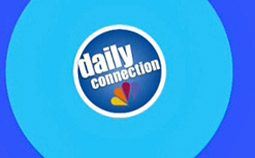 But even distraction-journalism lovers like me can't abide the daytime news broadcasts, which are like the evening ones minus the hair and wardrobe budgets. Replacing the showy half-investigative bits with shopping tips and how-to's on last February's technology, the 12 o'clock news is "news" only in the sense that it has an anchor behind a desk, saying things about stuff.

Thus the NBC mothership deserves some credit for attempting to remedy this dismal state of affairs with "Daily Connection," a hybrid of syndicated and local original content. It presents itself as a little miracle of packaging: Every weekday morning, NBC News culls content from its various platforms -- MSNBC, CNBC, et al. -- and sends it along to local stations, complete with sample scripts. The locals pick it up from there, plugging in their own anchors and adjusting as they see fit.

The content itself works well enough. NBC News remains an elite information retrieval and processing entity; even the lifestyle piffle on LX.TV, acquired by NBC Universal's local media division in 2008, transcends the oooh-shiny! limits of its genre. For the most part, the "Daily Connection" curators choose wisely from the news and entertainment morsels available to them, whether Tuesday's tale about the dude with plantlung or Wednesday's ride-along with George W. Bush in Haiti.

By the time the midday newscasters ball up yesterday morning's viral-video sensation with last night's national reports on the oil spill and the plane crash and the feisty flight attendant, it has been drained of timeliness. There are many people at home during the day who haven't caught up with the latest internet meme and, for them, the show can work. But for those of us who are wired (or wirelessly) connected -- a growing part of the population? Not so much.

Perhaps aware that they aren't delivering piping-fresh news, the hosts (or at least the two pairs I watched on the version of the show airing in New York City) do everything in their power to quip their way over, around, under and through it. This would be less of a problem if they had something more than arranged-marriage chemistry with one another.

For me, Wednesday's "Daily Connection" served as a prime example of why sober and factual will always trump glib and airy in the tele-news setting. Co-host DeMarco Morgan introduced his partner as "the oh-so-lovely" Cat Greenleaf. Not to be outdone, Ms. Greenleaf followed a segment on the International Space Station repairs by riffing on her "fantasy about blasting off," then introducing a report on a poop-fueled car with "perhaps waste does make haste." Perhaps sensing the need to counteract the pun processional, Mr. Morgan reacted to a segment on school bullying by describing it as "a crucial issue to pay attention to." America, you've met your next Cronkite.

There has to be a middle ground, right? There are quippy people everywhere you turn. Having the anchors dumb themselves down in the interest of a cheap midday giggle demeans both their intellects and the institution of TV news itself.

For folks who aren't glued to their computers all day, "Daily Connection" ranks as must-see TV. For everyone else, just informationally accessorize your lunch with a newspaper. That's the thing with all the words and smudges. It's quite striking.