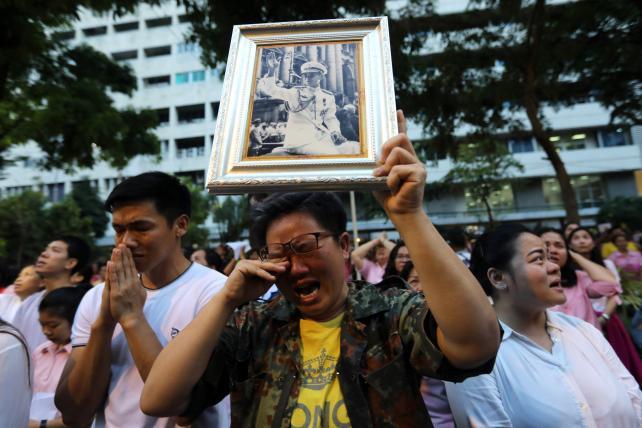 National mourning over the death of Thailand's king is having a deep effect on every aspect of life there – including on the nation's media. TV programming was replaced by footage of the king's life, some websites published in black and white and many digital billboards switched to messages honoring the king.

The country's broadcast regulator banned entertainment shows for a month and warned TV and radio stations to "follow palace protocol in airing news about the king's death," Bloomberg News reported. Programming across channels was replaced by footage about late King Bhumibol Adulyadej, and even "some foreign satellite stations such as the BBC and CNN have been replaced with black-and-white royal broadcasts," the Guardian said.

The king, who died Thursday at age 88, was a revered figure who took the throne 70 years ago. The government asked people in Thailand to abstain from "joyful events" for 30 days, and civil servants were asked to wear black for a year.

Sunee Paripunna, Thailand CEO of Omnicom Media Group, said a national television pool would live-broadcast each day's funeral rites for the late king, with normal programs resuming afterward with restricted content. "Most (channels) are airing content tributes to the life and work of the late King," she wrote. She said corporate advertising and restricted ad content are allowed, subject to station approval. Some magazine publishers would print ads with a white ribbon symbol of mourning on them.

"Outdoor LED lights are mostly off," she wrote. "Advertising on YouTube is temporarily paused." The situation will remain in place until further notice, subject to the government's announcement, she said.

(UPDATE: Ms. Paripunna said after publication that outdoor LED lights around the country were not off but had begun displaying messages honoring the late king.)

(UPDATE:Google said after publication that the company put up a black ribbon on YouTube and emoved all ads, and added a black Google logo and a black ribbon to Google's homepage. The company said these were the "immediate steps, all put in place within hours of the announcement and we're still assessing how we should appropriately show our respect.")

Many newspapers and news websites shunned color to publish in black and white, including English-language newspaper The Bangkok Post. Above the newspaper's logo, it ran a large photo of the king with the caption, "In Remembrance of His Majesty King Bhumibol Adulyadej, 1927-2016." Google's homepage in Thailand turned black and white too.