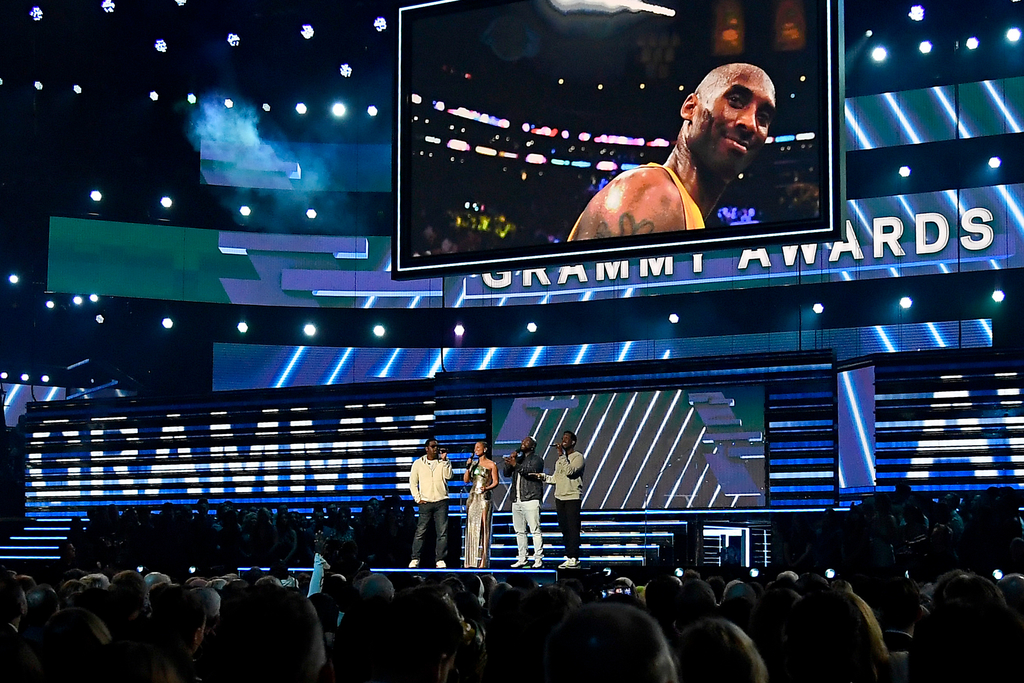 As a tribute to Kobe Bryant, Grammys host Alicia Keys performed “It’s So Hard to Say Goodbye to Yesterday” with Boyz II Men.

Ratings for CBS’s broadcast of the 62nd Annual Grammy Awards took a tumble on Sunday night, but the decline in the Nielsen data isn’t likely to dissuade advertisers from jumping in on the chorus during next year’s show.

On a night that saw the Recording Academy fete the spooky prodigy Billie Eilish while trying to process the sudden death of NBA superstar Kobe Bryant, CBS averaged 18.7 million viewers, which marked a 6 percent drop compared to the year-ago 19.9 million. This was the fourth least-watched Grammys on record, besting only the 1995 (17.3 million viewers), 2008 (17.2 million) and 2006 (17.0 million) shows.

The smaller TV audience is consistent with the ongoing decline in HUT levels, industry argot for the number of households with their TVs in use over the course of the night. That usage is down 7 percent since the broadcast season began back on Sept. 23.

For advertisers looking to reach CBS’s target demo, the Grammys effectively hit the same marks it did a year ago, averaging a 6.4 rating, good for some 7.8 million adults 25-54. Last year’s broadcast averaged a 6.7 (8.1 million). A similar dynamic held sway for the younger demo, as CBS posted a 5.4 rating among the 18-49 set, which translates to around 7 million adults under 50. The 2019 Grammys pulled a 5.6, or 7.2 million members of the teens-to-AARP crowd.

A showcase for music’s younger talents—along with the 18-year-old Eilish, who took home hardware for album, record and song of the year, as well as best new artist, the Academy celebrated the likes of Lizzo, Lil Nas X and provocateur/clothier Tyler, the Creator—the Grammys also drew an outsized audience of viewers between the ages 18 and 34. Per Nielsen, Sunday night’s show averaged a 4.0 in that particular demo, or 2.8 million viewers; the 2019 broadcast drew a 4.2 rating/2.9 million adults 18-34.

While younger Grammy viewers undoubtedly turned to their default setting (live streaming), CBS does not make a habit of disclosing how many people tune into its programming via its CBS All Access service. The network only said that this was the most-streamed Grammy Awards since All Access was launched in 2014.

For all the energy on display at the Staples Center, it was perhaps inevitable that Bryant’s death would cast a bit of a pall over the room. This, after all, was the very same arena in which the five-time NBA champ called home for 20 seasons, and both his No. 8 and No. 24 jerseys hang in the rafters alongside the numbers worn by those other indelible Laker mononyms: Wilt, Kareem, Magic, Shaq.

Grammys host Alicia Keys acknowledged the mood early in the broadcast. “We’re all feeling crazy sadness right now,” she said. “We’re literally standing here heartbroken in the house that Kobe Bryant built.” As an a capella tribute to the fallen hoops legend, Keys performed “It’s So Hard to Say Goodbye to Yesterday” with Boyz II Men, who, like Bryant, are Philadelphia natives.

The shock of Sunday morning’s events seemed to push any rancor about the Recording Academy’s own controversies aside—at least when the cameras were rolling. Even Donald Trump didn’t get his usual awards-show kicking; Keys furnished the only reference to the president in a throwaway line: “Commander in chief impeached/Ya’ll get out/Let’s bring Cardi B.” (Given the sort of things Robert De Niro comes up with whenever he’s holding court at an awards ceremony, Keys’ rebuff hardly registered.)

If nothing else, the somewhat subdued nature of the broadcast kept advertisers from having to sweat out many of the uncertainties that come with buying time in live TV. (The seven-second delay squashed any naughty words viewers might otherwise have heard, thereby preserving the sanctity of the nation.) Which is not to say that most of the clients didn’t know the score before the curtain went up; according to iSpot.tv data, among the biggest spenders in Sunday’s Grammyscast were Lincoln Motor Company, Google, McDonald’s, Pepsi, Walt Disney Pictures and Ford, all of which invested heavily in the 2019 broadcast.

Among the brands which sat out last year’s show but paid for multiple units in Sunday’s broadcast were Facebook and Verizon.