With Challengers to Apple, Netflix and Hulu, Emerging Media Creators Are in the Catbird Seat
READ THIS NEXT
Golden Globe-winner 'Queens Gambit' keeps fueling chess popularity and sales

Anyone still doubt content is king? Take a look at the power content owners once again hold as Amazon introduces viable competition to Apple's walled fiefdom. Or check out Netflix's ugly scar: a $10 billion extraction of market capitalization in the past two months.

Netflix has framed its decision to hike prices and split the company as all about preparing for the future of streaming video. But dig deeper and it's the cost of royalties driving up pricing and forcing the company's hand. Netflix's contracts with key players, such as Sony and Starz, were either about to expire or already had hit pre-established usage limits, just as new competition from Amazon and Dish Network's Blockbuster partnership loomed.

Rising competition for content has also strengthened the hand of content owners outside of video. By treading on one another's content turf in e-readers and tablet computers over the past year, Apple and Amazon have shifted a bit more bargaining power toward book and magazine publishers.

Book publishers used the leverage from Apple's iPad entry last year to break the $9.99 price ceiling Amazon once had on most e-books. How well magazine publishers fare as Amazon takes a swipe at Apple may be seen when Time Warner completes negotiations for use of its titles on the new Kindle Fire. But the prospect of competition from Google and Amazon already appeared to help convince Apple to share reader data with publishers that it originally wanted to keep for itself.

For years, owners of another prime piece of entertainment content -- sports leagues -- have flexed their muscle, getting concessions that have paid handsomely of late. Hungry for virtually DVR-proof sports programming, networks actually negotiated contracts that would pay the NFL and NBA $4 billion and $900 million a year, even if the owners locked out players.

It's true that creating content alone won't cut it; owners need to find smart partnerships with an increasingly complex web of distributors. But it's equally true that a distribution platform with little to distribute is of little use to consumers, no matter how fancy the interface is . Just look at Hulu, whose value in any potential sale remains tied to how much distribution access it will continue to have for fare from its current owners -- three of the four major TV networks.

But Netflix is perhaps the biggest victim of content's rising power -- and just when it looked to some like it had killed the king.

Before Netflix announced its subscription split in July, "The Atlantic" published Jonathan Knee's compellingly reasoned "Why Content Isn't King" article. It argued that content aggregators like Netflix were the real power brokers and money makers today, leading to a stock price acceleration that defied all odds and drained the accounts of many short-sellers.

Then came the news of Netflix's subscription split and price hike, loss of major content deals from Sony and Liberty Media's Starz, and downward revision of more than 1 million Netflix subscribers -- all leading to a 63% decline in Netflix stock value between July 13 and Sept. 30.

At the root of Netflix's troubles are growing competition for content and the power of content owners, said Wedbush Securities analyst Michael Pachter, who estimates that Netflix content costs are in line to rise more than tenfold from $180 million in 2010 to nearly $2 billion next year. 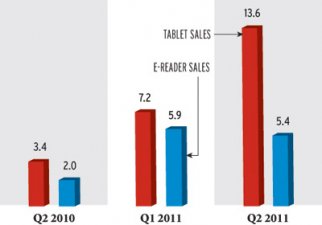 Books: Tablets beat e-readers, but both grow quickly (in millions)

Netflix earlier this year already reached a cap on streams of Sony movies under a long-term deal with that company, and it announced in late September a deal to wrest DreamWorks Animation films from HBO. But at the $30 million per film reported by The New York Times, DreamWorks will get for just three films a year half of what Netflix paid for all its video content last year.

Netflix faces rising competition for content from the likes of Amazon and Dish Networks' deal with Blockbuster, Mr. Pachter said, and studios realize that even if Netflix has largely created the market for streaming video, it's whetted an appetite only their own content can feed.

Mr. Pachter said he foresaw the problems for Netflix and put a sell recommendation on the stock in April 2010 "about $200 too early."

In September, he did put a buy recommendation on the stock on the theory that the Netflix-Qwikster split was structured to easily allow the Netflix streaming business to be sold. He believes Amazon will be the buyer to create the biggest distributor "and put a big moat around it."

That could mean less competition for streaming video long term, but Nomura Securities analyst Michael Nathanson said in a recent research note that Starz's decision to walk away from Netflix really had more to do with the logical calculation that the company made more money by preserving its relationship with cable networks than it could in dealing with Netflix. Mr. Pachter said Starz got pushback from cable operators because terms of its deals essentially gave Netflix content at half the price cable-system operators paid, Mr. Pachter said.

Mr. Nathanson said Hulu's media-company owners have also made a rational decision to preserve the value of their content for what remain their primary distribution customers -- cable and satellite distributors -- by restricting immediate release of more content except to subscribers.

Amazon's Kindle Fire could further fuel demand for streaming content, as Amazon adopts a sort of modification of the razor-blade model (selling razors cheap to hook users on high-margin replacement blades). In this particular case, video content is actually part of the cheap razor, but Amazon will still need plenty of it to make its proposition work.

The $199 price for a Fire is estimated by analysts at $50 under cost. The one-month free subscription to Amazon Prime that comes bundled with it includes unlimited video streaming, toward the end of hooking buyers on an annual $79 Prime subscription.

Given rising streaming content costs, it may still be hard for Amazon to profit on Prime by itself, but getting millions more people to buy Prime and its free or discounted shipping benefit will also provide an incentive for them to buy more stuff on the rest of Amazon (the expensive blades in the equation).

"You sort of have to crane your neck to see Amazon's true objectives here," said Will Richmond, president of marketing intelligence and consulting firm Broadband Decisions and publisher of the daily online publication VideoNuze. But he said Kindle Fire could help a lot of content owners, whatever Amazon's intentions.

"Content owners are in the catbird seat, because anytime a new distributor or new device crops up, they need great content to drive the platform's appeal," he said. "To the extent you've got great content that works well in a digital environment, it's great to have a bunch of new buyers." 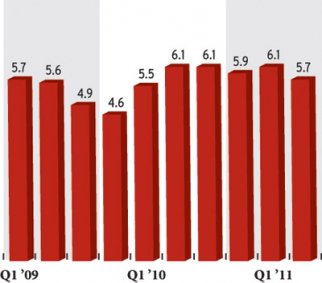 Video: Video revenue keeps growing at healthy clip even in recession
Video-content owners and book publishers benefit most from rising demand for content because they didn't take the paths that have hurt the music and newspaper industries. The music industry was slow to make its product available online for a fee, which helped fuel illegal peer-to-peer content sharing, Mr. Richmond said. And newspapers and many magazines spent years giving their product away for free, supported (marginally) by advertising, only in some cases try to yank it back behind a pay wall.

Book publishers, never supported by advertising, insisted on a "closed garden" format for e-books that 's hard to swap among consumers. Online video has long been available online for a fee, conditioning more consumers to pay for it, Mr. Richmond said. While P2P "sharing" happens with video, it's harder and less prevalent, he said, in part because the files are so much larger and the process harder.

Video content, however, isn't the only type to command strong value thanks to growing distributor competition, high consumer engagement or restrictions on availability. The NFL lockout helped expose the enormity of the power the league held over networks when it CBS, Fox and ESPN were on the hook to pay their $4 billion fee even in the event of a lost season. Even the NBA, with a $900 million contract and less intense fan support, managed to get a similar guarantee in its contract. Now, seeking to build some of the leverage the professional leagues enjoy, college football is evolving toward a limited group of what may be four mega-conferences that would have added bargaining power with networks.

But the power of content still comes down to supply and demand. Creators of music and print content are far more plentiful than those who can make feature films and TV series, and Mr. Pachter believes streaming-video-content owners also operate in a market where consumer pricing expectations are less established in the minds of consumers, making price hikes easier to take. Even though Netflix is taking its lumps, cable operators have been pushing through higher prices for years.

But Nomura's Mr. Nathanson said the harder line taken by video content owners and the inevitable restriction in availability and increase in price does add risk that more consumers will bypass subscriptions in favor of peer-to-peer file sharing.

In the spring 2011 Sandvine Global Internet Phenomena Report, Netflix for the first time became the biggest user of bandwidth in North America, accounting for 22 .2% of traffic. The former leader it just edged? P2P service BitTorrent, which accounted for 21.6%.

The multibillion-dollar question: How many of those subscribers Netflix loses will be found by BitTorrent rather than another subscription service?