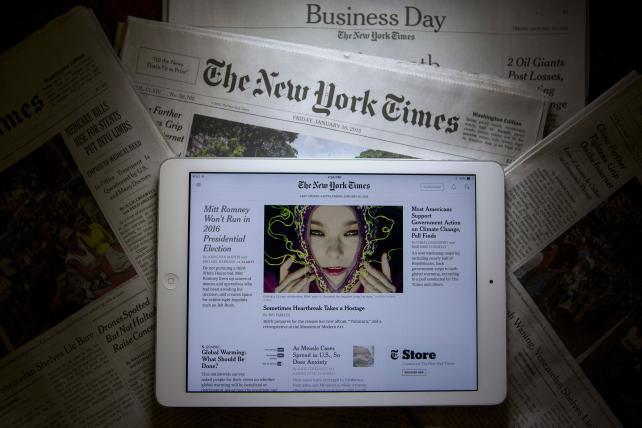 Earnings excluding some items were 13 cents a share, the New York-based company said in a statement. That compares with the 11-cent average of estimates compiled by Bloomberg. Revenue, down 1.5% to $382.9 million, fell short of the $383.3 million average projection.

Digital comprised 32.5% of total ad revenue at the company, up from 26.9%, as digital ad revenue rose 14.2% to $48.3 million. Print ad revenue losses again overwhelmed the digital gains, however, falling 12.8% for an overall advertising drop of 5.5%.

The publisher has been trying to attract more digital subscribers and sell native ads designed to resemble news stories.

On the circulation front, revenue rose 0.9%, the company said. Paying digital-only subscribers numbered 990,000 at the end of the quarter, up 19% from the period a year earlier.

"Expense management will remain a top priority as we head into the second half of 2015, although our emphasis on digital investment and execution is also more intense than ever," Chief Executive Officer Mark Thompson said in the statement.

The Times recently joined other publishers in partnering with Facebook and Apple to post stories directly to the tech companies' news feeds rather than just links back to NYTimes.com. Mr. Thompson has said the deals will increase digital ad revenues and could attract more subscribers.

The Times also continues to invest in print. It introduced a redesigned New York Times Magazine in February and a monthly men's style section in April in an effort to bolster print advertising, which still makes up a large part of revenue.