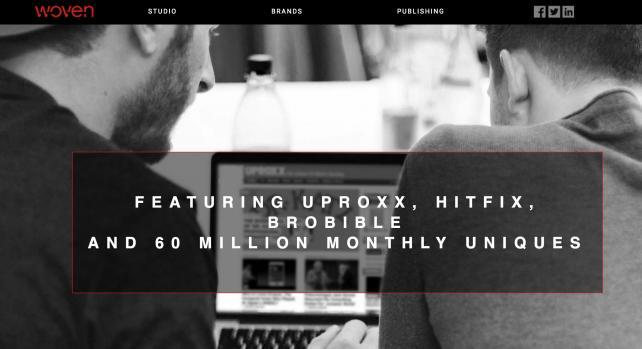 Woven Digital, which publishes millennial-focused brands such as BroBible and Uproxx, recently laid off just under 20 employees, according to multiple people with knowledge of the California-based company.

Most of those affected worked for HitFix, an entertainment news site acquired by Woven in April. A spokesman said there was some overlap between HitFix's staff and Uproxx's staff, which led to the layoffs.

Some sales, editorial, management, and technology staffers across the company were also part of the layoff round, he said.

"This is a very normal part of scaling up and scaling down a business," the spokesman said, noting that the company recently hired three new employees. He said it was "hard to say" how many people work for Woven Digital, but another person familiar with the company estimated its head count at between 110 and 120 people prior to the cuts.

The company's series A round of funding in late 2014 reportedly valued it at "close to $100 million."

Woven Digital this summer raised $18.5 million in a series B funding round, led by WPP investment arm WPP Ventures, but declined then to discuss its valuation. When asked at the time about fears of an downturn in venture-backed web publishing, Woven Digital CEO Colin Digiaro told The Wall Street Journal, "We are not planning a bunch of cuts."