READ THIS NEXT
TV's most expensive shows for advertisers this season 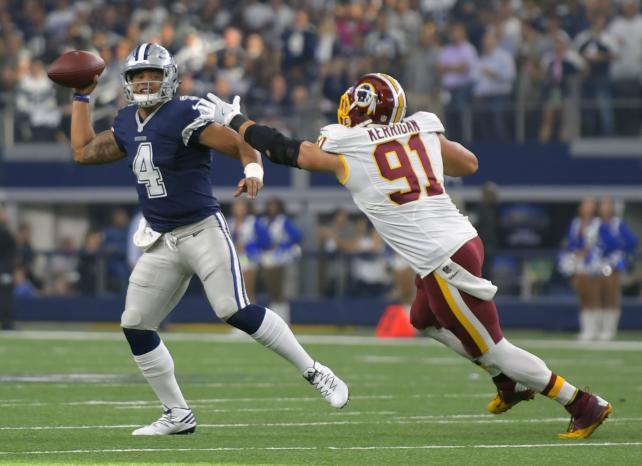 Dallas quarterback Dak Prescott gets off a pass against Washington linebacker Ryan at AT&T Stadium in Arlington, Tex., on Thanksgiving.
Credit: John McDonnell / The Washington Post via Getty Images

Heading into the playoffs, the NFL's broadcast partners have every right to anticipate the usual ratings lollapalooza, as the franchises with the best odds of securing a berth in the Super Bowl also happen to be the biggest TV draws.

Vegas bookmakers have listed the New England Patriots as the favorites to hoist the Lombardi Trophy on Feb. 5, laying 7-to-5 odds on Bill Belichick's charges, while the Dallas Cowboys currently are the best bet among NFC teams at 7-to-2. Pittsburgh, the AFC squad with the most realistic shot at knocking off the implacable Patsies, shares 8-to-1 odds with the Green Bay Packers.

As it happens, those teams are among the NFL's most-watched franchises, as far as national TV windows are concerned. If nothing else, the popularity of the higher-seeded playoff teams suggests that, after a season marked by not-insignificant ratings declines, advertisers investing in postseason inventory can feel confident that their messaging will reach the optimum number of viewers.

Dallas this season regained its top dog status from Green Bay, finishing out the year with an average draw of 24.4 million viewers and a 13.4 household rating over the course of its 12 national windows. ("National" is a catch-all for the 52 primetime NFL broadcasts spread across "Sunday Night Football," "Monday Night Football" and "Thursday Night Football," as well as the late Sunday broadcasts on Fox and CBS and the three Thanksgiving Day games.)

The Cowboys in 2016 were such a reliable source of ratings points that they accounted for the most-watched game on four network packages. Their Turkey Day skirmish with Washington was Fox's biggest regular-season draw since it first began carrying the NFL back in 1994, averaging 35.1 million viewers, while a Dec. 11 loss to the Giants on "Sunday Night Football" delivered NBC's biggest audience of the 2016-17 TV campaign thus far (26.5 million viewers, 14.9 household rating).

Dallas also gave ESPN a late Christmas present, when its 42-21 Boxing Day blowout of the Detroit Lions scared up 18.6 million viewers and a 10.1 rating, making it the most-watched, highest-rated installment of "Monday Night Football" since Oct. 27, 2014. (That game of two years ago also featured the Cowboys. Surprise.) Lastly, the Cowboys helped make NBC's inaugural season of "Thursday Night Football" a success, when its 17-15 victory over the Vikings on Dec. 1 delivered a "TNF"-high 21.8 million viewers and a 12.8 rating.

That Dallas' TV ratings were effectively unchanged compared to its year-ago average (24 million viewers, 13.5 rating) is a testament to the franchise's national following. Last season, the Cowboys compiled a woeful 4-12 record, their worst since 1989. This year, they dominated the NFC -- er, at least that part of the conference that lies beyond the bounds of the greater New York City DMA -- and went 13-3, and yet their TV numbers were all but identical to last year's. If Dallas next season isn't once again featured in a dozen national windows, I'll eat my imaginary stetson.

Trailing Dallas for share of hearts and minds were Pittsburgh (20.6 million viewers, 11.4 household rating), New England (20.5 million/11.9) and Green Bay (20.3 million/11.6). In keeping with prevailing NFL ratings trends, all three teams experienced year-on-year declines, with the Steelers dipping 5% compared to its 2015 average (21.6 million viewers), while the Pats dropped 10% from 22.8 million and the Packers skidded 17% versus its league-topping 24 million.

All things being equal, Detroit was officially the year's second-biggest draw, although the Lions' average draw of 23.3 million viewers carries something of an asterisk, given that the team played in just three national windows, one of which was its annual Thanksgiving showcase and another the aforementioned prime-time drubbing by Dallas. In sidestepping a date with the NFL Network's low-rated "Thursday Night Football" roster and getting flexed into the season's final TV window as part of a winner-take-all battle with NFC North rival Green Bay, the Lions enjoyed all the perks of national exposure with none of the attendant pitfalls.

Fox on top
As Fox has no doubt already worked out to its satisfaction, any combination of the top six teams along AFC-NFC lines would likely result in yet another Super Bowl ratings record. Dallas-New England would be an absolute feast for fans and haters alike, and previous showdowns between the Cowboys and Steelers, Packers/Steelers, Pats/Giants and Pats/Seahawks set high-water marks that stood for a year or two until the next monster game came around.

On the other end of the ratings continuum are the curiously undervalued Atlanta Falcons, which like Kansas City are booked at 10-1 to win it all in Houston; the 11-5 NFC South champs drew just 12.2 million viewers and a 7.2 household rating in their three national windows, putting them in the company of the luckless Los Angeles Rams and Cincinnati Bengals. Also mucking around in the ratings root cellar are Houston (12.1 million, 7.1 rating) and Miami (6.15 million, 3.7), which bears the dubious distinction of being the lousiest draw this side of the Browns, Jags and Titans.

If the franchise ratings are anything to go by, the cream of Wild Card Weekend is likely to be Saturday night's Lions-Seahawks game on NBC and what's bound to be an icy Giants-Packers ordeal on Fox Sunday afternoon. If Seattle tames the Lions at home, Dallas on Jan. 15 will host the winner of the New York-Green Bay freezeout.

That's the very definition of a no-lose proposition for Fox, as either matchup would be a sure thing to deliver north of 40 million viewers and at least a 22.0 household rating.

Comeback season
As the door closes on the regular season, it's worth noting that the NFL ratings stabilized in the final month of play. After a rocky period in which prime-time deliveries were down as much as 20% compared to the year-ago interval, a flurry of more competitive games and a heavy dose of Dallas helped alleviate some of the early damage.

For the eighth consecutive season, Fox's "America's Game of the Week" stands as the most-watched program on TV, drawing 26 million viewers and a 14.7 household rating over its eight Sunday afternoon windows and the Thanksgiving Day broadcast.

Saddled with a Saturday Christmas Eve game (Vikings-Packers) that coincided with one of the year's lightest TV-watching windows, Fox saw its national NFL package drop 4% in total viewers and 7% in ratings compared to the year-ago 27.2 million/15.3. Setting aside that holiday speed bump, Fox's 4:20 p.m. package settled in nearly flush with last season's average.

The No. 2 NFL window once again may be found in CBS' late-national Sunday game, which averaged 23 million viewers and a 12.8 household rating, down 11% compared to the 2015 campaign. CBS assembled its biggest audience with its Thanksgiving Day Vikings-Lions broadcast, which drew 27.6 million tryptophan-besotted fans, while the Patriots' 16-3 win over the Broncos on Dec. 18 put up the highest household rating with a 14.3.

Taking the bronze is the top-rated show in primetime, as NBC closed the books on its eleventh season of "Sunday Night Football" with an average draw of 19.5 million viewers and an 11.0 rating. While overall viewership was down 9% from last season's 22.5 million, the final numbers were a damn sight better than how NBC (and the other primetime rights holders, for that matter) had been faring in the fall. As late as Week 13, "Sunday Night Football" ratings were down 15% year-over-year.

NBC went a long way toward stabilizing its seasonal numbers in the course of its last four "Sunday Night Football" broadcasts, which averaged 24 million viewers and a 13.0 household rating. Those numbers likely would have been higher still if the penultimate game hadn't been played on Christmas night. As it stands, the Sunday night package towered over the rest of the prime-time field with an average rating of a 7.0 among adults 18-to-49 in live-same-day, easily out-pacing runner-up "The Walking Dead" (5.7) in the advertiser-coveted demo.

Simulcast on NFL Network, NBC's five-game "Thursday Night Football" package was the league's fourth-biggest national offering, averaging 17 million viewers and a 10.2 household rating. With an average draw of a 5.2 among adults 18-to-49, ratings for NBC's new pro pigskin showcase quadrupled the 1.3 demo the network ekes out on non-football Thursdays. (NBC's standard Thursday night rotation features the comedies "Superstore" and "The Good Place" as well as the dramas "Chicago Med" and "The Blacklist.")

CBS' early-season "TNF" slate dropped 16% to 14.7 million viewers and a 9.0 rating, when compared to the first five games of its year-ago package, while the NFL Network's standalone eight-game set fell 11% to 6.71 million viewers and dropped 21% to a 3.7 rating.

In addition to a handful of games that could only appeal to diehard fans and degenerate gamblers (Jags-Titans, Browns-Ravens), the NFL Network was also saddled with a London game that kicked off at 9:30 a.m. EDT and two Saturday telecasts. For all that, NFLN posted a ratings record on Christmas Day, when it hosted what arguably was the season's most riveting game. In dialing up a last-second win over the Ravens, Antonio Brown and the Steelers in one fell swoop clinched the AFC North title, eliminated their rivals from the postseason field and helped NFLN deliver a record 14.8 million viewers, shattering the earlier high-water mark of 10.7 million set in 2011.

Lastly, while ESPN at the end of the season experienced some relief from its own ratings set-backs (at its nadir, "Monday Night Football" ratings were down 21% compared to the year-ago period), it could not entirely overcome a combination of lopsided contests and a schedule teeming with second-tier franchises. The Monday night package averaged 11.4 million viewers and a 6.8 household rating, down 12% and 16%, respectively, from 2015. ESPN fared somewhat better among its target demo, as its average 4.5 rating among adults 25-to-54 marked a 13% decline compared to last season's 5.2.

The average margin of victory in this season's 17 "Monday Night Football" contests was 14.9 points, or about a touchdown and a two-point conversion north of its year-ago 7.1-point spread. Ten "MNF" games were decided by 14 points or better; among the biggest blowouts was the 49ers' 28-0 blanking of the Rams during the network's opening night doubleheader and a 41-10 Colts mugging of the Jets that was as compelling an argument as any to be made for reducing Gang Green's national TV exposure to the league minimum.