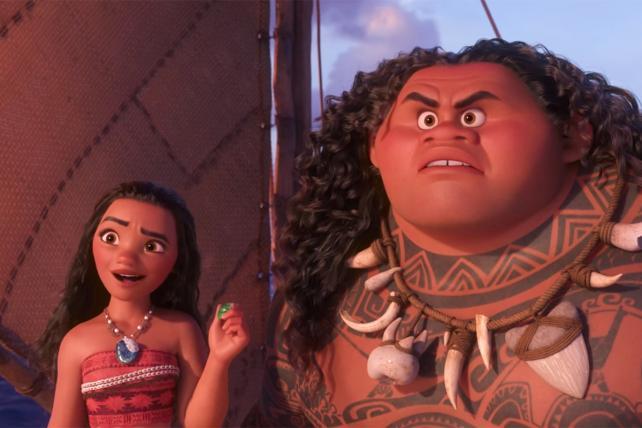 With songs from "Hamilton" creator Lin-Manuel Miranda, "Moana" outperformed three other new releases in U.S. and Canadian theaters, ComScore said in an e-mailed statement Sunday. The movie missed the $72.5 million estimate of analysts at BoxOfficePro.com.

The studio had already won seven of the top eight highest Thanksgiving opening three-day weekends, adjusted for inflation, thanks to movies like "Toy Story" and "Frozen." In 2013, "Frozen" set the record with $67.4 million, according to BoxOfficePro.com. "Toy Story 2" in 1999 had sales of $57.4 million.

The success of "Moana" tightens Disney's grip on the box office ahead of the release of another "Star Wars" film in December. The tale of a Pacific Islander girl won almost universal acclaim: 97% of critics gave it positive reviews, according to Rottentomatoes.com. When a South Pacific island's resources and population begin to dwindle, the teenage princess defies her father's orders and sets sail in search of help from the demigod Maui, voiced by Dwayne Johnson. The movie cost an estimated $150 million to produce, not including marketing expenses, according to IMDB.com.

Of the other new releases, Paramount Pictures' "Allied" fared best. The film placed fourth and collected $13 million, trailing Box Office Mojo's forecast of $18 million over the three-day weekend. Marion Cotillard and Brad Pitt star as spies who fall in love during World War II, but their relationship is thrown into doubt over suspicions that one is a double agent.

For the five-day holiday period that started Wednesday, "Moana" generated $81.1 million, second-best behind the $93.6 million generated by "Frozen," ComScore said.