NEW YORK (AdAge.com) -- Disney Publishing Worldwide is giving the ax to Disney Adventures magazine, the company said. The November issue will be the publication's final. Disney Publishing attributed its decision to an effort to better focus resources and maximize long-term growth potential through new magazine and book initiatives. 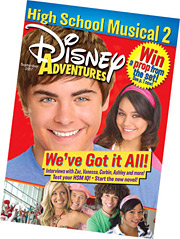 After 17 years, Disney Adventures magazine will stop publishing after this year's November issue.
The demise of Disney Adventures, which was introduced for tweens in 1990, closely follows the end of fellow child soldier Nick Jr., which MTV Networks closed with the April issue. It isn't clear that there's any particular exodus of children from magazines, but proliferating competition and rising costs are knocking out big magazines at a fairly regular clip these days; adults for their part have lost Premiere, Jane, Life and Child so far this year.

Disney Adventures, which still maintained paid circulation above 1 million, ran 97.9 ad pages in the first half of the year, up 4.5% over first-half 2006, according to the Publishers Information Bureau. The magazine's ad pages, however, had declined 3.9% in 2006 as a whole.