Dude, I had a kickin' Earth Day on Tuesday. First I replaced all my compact fluorescent lightbulbs with incandescent ones, then I forced Jeffrey Sachs at knifepoint to buy stock in ExxonMobil. Upon failing to locate a neutralize-thy-carbon-footprint megaconcert featuring Lenny Kravitz on TV, I commiserated by swigging basement hooch from styrofoam cups, which I proceeded to tear apart, dip in butter and feed to endangered snow leopards. At the end of the day, I burned down a vast swath of rain forest -- just because I could. 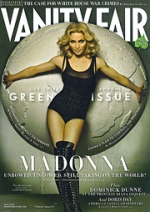 Vanity Fair's 286-page green-themed issue: As environment-simpatico as a coal tree.
And yet I still celebrated the holiday more responsibly than did Vanity Fair, whose 286-page green-themed issue is as environment-simpatico as a coal tree. I might be a hot-water-drippin', electronic-device-chargin' reprobate, but I'm also not presenting myself as the paragon of gracious living. Vanity Fair, on the other hand, slaps itself on the back for publishing roly-poly polar bear pix and Robert F. Kennedy Jr. think pieces about the environment, even while the mag shuns recycled paper.

Paper tiger
There's no genuine commitment here, which renders the May issue and its do-as-we-say stridency thoroughly irrelevant.

Much worse than that, it's boring. The Kennedy piece scores with its to-the-point proposals, while the meticulously reported Monsanto takedown probably has the company's PR firm in a lather. Beyond that, though, nobody needs to read 72,000 words on Donald Trump fighting a lone holdout to develop a golf course in Scotland, 127,000 words on the Arctic oil rush and 242,766,953 words on China's attempts to engineer the weather, especially since each of these stories has been reported elsewhere. I applaud Vanity Fair's commitment to long-form journalism and disdain for list-icles, but the mag's features continually run hundreds of words past their logical conclusion. What I tend to do in such situations: Stop reading.

The non-environment-themed stories similarly demand some judicious editing. The excerpt from a book on Doris Day's life and career doesn't merit the chunk of real estate it receives, unless VF has more ancient-Hollywood disciples on its subscription rolls than anyone expects. Then there's the cover feature, which lost me at this precise moment: "I felt the presence of Madonna as soon as I landed at LAX." Forget Madonna herself -- let's hear more about the author's spooky-dooky spectral sensations and, perhaps, his in-flight beverage selection.

Enough said
While they're at it, Vanity Fair might also consider reining in its columnists. Matt Tyrnauer's piece on some intelligent-design architect dude might not actually have an end; after six hours, I slunk away in search of food, shelter and human companionship. I've long appreciated Michael Wolff's crankiness, but nobody, not even media navel-gazers, is clamoring for yet another lengthy dissection of potential New York Times buyers. Most folks I know would embrace Bob Guccione as the paper's new editorial overlord if it meant an end to all the conjecture.

Meanwhile, I humbly request that Congress enact legislation banning Dominick Dunne from reporting on any situation in which celebrity and jurisprudence collide. In the May issue, he brings the same gorked-out speculation to his coverage of the Princess Diana inquest that he did to his spacey exegeses on the O.J. and Menendez brothers trials: "The more I hear and read and think about Diana's and Dodi's deaths ... the more I doubt the truth of their great romance." Oh, do you now? Let's send Dunne to the petting zoo to see if he can glean similar insight from the feeding patterns of the baby ducks.

As for the ads, well, there are a lot of 'em, ranging from brands that target rich people (Kohler, Perry Ellis, Charles Schwab) to brands that target richer people (Patek Philippe, Jaguar, Louis Vuitton). The multipage spread attempting to position Dillard's as Target v.2.0 jumped out at me, as did the mag's unfortunate tendency to clump ads in peculiar places (vodka and "ageless day lotion" in the middle of the Monsanto investigation).

Credit where it's due
Meanwhile, kudos to the handful of advertisers -- Lexus, Fiji Water, Kendall-Jackson winery, ABC Carpet & Home, BMW, GE, Chevrolet and Mini -- whose ads echo the green theme. Granted, they'd probably have run in VF if the May issue were pro-seal-clubbing or anti-lettuce, but it's still heartening to know that their media minions were mindful of coming across as responsible, attentive earth denizens.

As somebody programmed to dislike publications that revel in their self-importance, I've never been a Vanity Fair fan. The calendar of highfalutin diversions for urbanistas, the "Best of" nods to underwater restaurants, the prettified pix ... nothing here is as entertainingly smart as the big-thinking pieces in The Atlantic or smartly entertaining as the culture nuggets in New York magazine. I understand why Vanity Fair is an awards magnet and an advertiser favorite -- it's shiny and Very, Very Tasteful -- but it still strikes me as a better coffee-table accoutrement than a read.

And finally: Enough with the green-themed issues, whether Vanity Fair or Town & Country or Soot-Lung Weekly. Something's gotta be done about the environment. Duly noted. Now, let's get back to busying ourselves with Indiana Jones and sandals.