Dateline: Monday morning at the local newsstand. Chin tucked low against the chill, I collect my daily reading stash, exchanging a knowing wink with the gals on the cover of Good Housekeeping. As I reach for my billfold, the proprietor gestures toward a sticker plastered on the overhang: "New today: The Wall Street Journal's 'Greater New York' section." 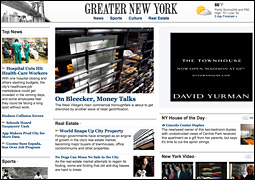 The online version of The Journal's new 'Greater New York' section.
A furrowed brow and disoriented "guh?" announce my befuddlement. How hadn't I heard about this? Surely any such launch by a cocksure media colossus would have been heralded with grand proclamations delivered over the din of journalists scrounging for free radishes, or at least the sort of I-know-you-are-but-what-am-I? braggadocio native to Bret Michaels' parlor room.

Sensing this disconnect, the proprietor directs me to the small print. There I learn that a grand, horrible newspaper slapfight is about to be waged and that I live smack dab in the middle of its demographic battlefield. Though a pacifist, I find myself tantalized by the carnage to come as well as by the brashness of The Journal's hostile incursion.

This is revolutionary, I think. A newspaper named after a street in New York City -- a newspaper that has spent the last 120-odd years chronicling the ups and downs of the city's preeminent industry (no offense, musical theater or class warfare), no less -- potentially choosing to write about that city's zoning kerfuffles and condom kiosks? So brilliant! So bold!

I stop hyperventilating and plunk down my two bucks, and practically float home. I clear myself a comfortable place on the couch, lay out the crisp broad sheets before me and then...

Then nothing. On Tuesday and Wednesday, ditto. The Journal, it seems, has showed up at the first battle of The Great Newspaper War of 2010 armed with nothing but a spoon and some empty paint cans.

One could argue that it's unfair to judge the "Greater New York" section in its first days, that all verdicts should be withheld until it gets several volumes under its belt. Well, by declaring its expectation to cause a "revolution in regional coverage," The Journal has forfeited its grace period.

The direct target , based on statements from folks in and around The Journal, is The New York Times. But while The Times' metro coverage has seen better days, no rational human being comparing the Monday, Tuesday and Wednesday metro sections of the two papers could possibly conclude that the trash-talking challenger will topple the heavyweight title holder anytime soon.

From The Journal's perspective, the thinking goes something like this: "Greater New York" will prompt readers unaware of The Journal's expansion beyond its business-only heritage to sample the paper for the first time in a while. Once they do, they'll note how the paper has become more rounded and less brainy, and pledge their undying fealty. In theory, this makes sense. In practice, it fails to account for the possibility that these readers might care more about the local news than about the other stuff, however worldly and brilliant, that surrounds it.

Simply put, "Greater New York" doesn't fit. Its bright, airy layout -- on Wednesday, it devoted a full 20 percent of its "Heard and Scene" page to a bland red-carpet photo of Naomi Watts -- is at odds with the paper's information-dense business coverage. Anyone who prefers the former will be turned off by the latter, and vice versa.

Similarly, there are plenty of other places to go for press-releasey blurbs on New York lunch eateries and the "real feel" temperature. The sports coverage pulls a groin straining for relevance; its credibility isn't helped by an unfortunate tendency to report the news way after the fact. For example, Wednesday's paper included the Major League Baseball standings as of the end of play on Monday night. If you can't do it right, don't do it at all.

All this would be forgotten if the core news delivered, but the section's front-page fare fails to excite. While an analysis of teacher-absence data connects, much of the rest of it comes across as scattershot: a report on the imminent end of the Jim Calhoun era at U-Conn, a let's-say-nice-things-about-nice-rich-people "Donor of the Day" piece on Dr. Atkins' widow, a story on the killer Yale doctor that reads like AP copy, etc.

There's nothing wrong with these stories, which inform reliably enough. But few pass the who-cares? test. They're dull and obvious, which is sacrilege in a newspaper town where headline writers jump at the chance to print "rampage!" or "gal pal!" in bold, 88-point font.

Just compare those metro-area offerings with what The Times has monitored this week: a barista walkout in precious Park Slope, the continued enforcement of loitering laws long since deemed unconstitutional, the Sisyphean process of naming a co-op building, an "attendance court" for collared class-cutters. The Times' metro section neatly balances the outrage and the quirk, while The Journal's just plods along like an out-of-towner.

I found one thing to like in "Greater New York": "Property," its daily real-estate page or two. Not coincidentally, few other local papers serve up anything like it on a regular basis (lo and behold, on Wednesday The Times just happened to run a big ol' story on a Wall Street luxury building about to become rent-stabilized). The Journal's real-estate coverage is light and brassy, playing up celebrity at the expense of market dynamics. It reads like something from the Post or Daily News. In this particular instance, that's a compliment.

The Wall Street Journal remains a pillar of my media world. Its business coverage trumps anything comparable published in the English language anywhere on earth. But the "Greater New York" section feels like a vanity project, more like a tacked-on third garage or a Mick Jagger solo album than a fully realized entity. Whatever happens on the financial/advertising front, "Greater New York" vs. The Times projects as a rout editorially.