My friends and I had a long, beery conversation a few months back that morphed into an ongoing debate. The topic: Is there a single celebrity, athlete or public figure so universally beloved that he or she could do just about anything without prompting questions about his or her sanity?

Gwyneth Paltrow: Who appointed her the arbiter of chic-living, girly girliness?
Credit:
AP
We've come up with four: Tom Hanks, Meryl Streep, Michael Jordan and Walter Cronkite. Nobody would bat an eye if Uncle Walter decided to cut a record with Art Garfunkel or if Streep opened up a car wash. I'd let Hanks change my brake pads. I'd let MJ remove my molars.

Their personal brands are built on a big ol' slagheap of trust, respect and admiration. As a result, we'll follow them wherever they go. They're among the few public figures who can get away with a personally branded magazine or dippily self-reverential web presence, with the exception of Oprah and drunk-on-macrame projectmeisters like Martha Stewart.

I recalled this highbrow debate the other day when checking out two websites backed by big names, the Gwyneth-icent Goop and WowOwow, brought to us by media mademoiselles such as Liz Smith, Peggy Noonan and Lesley Stahl. My initial thought was that stranger celebrity projects have been birthed on the web, so maybe Gwyneth Paltrow's bath-salt recommendations or the media gals' musings on the sociocultural implications of Michelle Obama's sleevelessness might command some attention. And they do, for different reasons.

WowOwow, launched about a year ago with much fanfare, hasn't yet gotten the hang of this highfalutin internet thing. Its "about" page describes the venture as a "free daily internet website," which might come as a shock to those of us unaware that they now have websites on the internet. Also, WowOwow remains as clumsy and unutterable a name as there is on the web -- an impressive feat, given that 372,000 sites boast some square-peg variation on the word "tube" in their moniker. A quick check reveals that a few equally ungainly URLs -- 51isthenew26.com and MatureMediaMommas.com, to start -- remain unclaimed. I'm just sayin'. 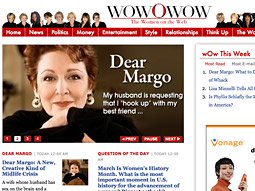 WowOwow hasn't yet gotten the hang of this highfalutin internet thing.
This web klutziness notwithstanding, I keep coming back to a single question about WowOwow: Why? Was anybody clamoring for Candice Bergen's thoughts on loaning money to friends, or Joan Ganz Cooney's opinion about the current direction of the Catholic Church? I'm going to go out on a limb here and say no. I also wonder if the intelligent, discriminating, 40-and-up women WowOwow is targeting will prove a loyal and attentive audience. Jezebel, for instance, can count on internet-reared 20-somethings hanging on its every rant; I doubt WowOwow can expect the same fanaticism from older web crawlers.

That said, WowOwow isn't by any stretch of the imagination a vanity project. Ranging from web mainstays (book clubs, gossip) to more in-depth material (a big honkin' profile of "Barbarella 2" megavixen Phyllis Schlafly), the content comes across as thoughtful and engaging. The site attempts to cover an awful lot, but it boasts the brainpower and celebrity sparkle missing in most corners of iVillage and More, its two competitors for clicks from women of a certain age.

Plus you gotta love any supposed high-minded site willing to knock itself down a few pegs courtesy of the 36-point headline "Dear Margo, My husband is requesting that I 'hook up' with my best friend ..." With a little work on the presentation front -- no home page should feature 25 stories; a big-ass revolving pane with the day's showcased material; and an endless sidebar touting most-read and -commented stories, "reader voices," four columnists, and Google ads, as the site did this morning -- WowOwow could evolve into something more than a curiosity.

Gwyneth Paltrow's Goop, on the other hand, is the paragon of aesthetic simplicity. Visitors to the site encounter a mere six small images and 40 words, a sum that includes the rights/privacy statement and Gwyn's signature. Its organizational framework is similarly minimalist, with each of the images (a playground slide for "do," a butterfly for "be," binoculars for "see") leading to "newsletters" in which our more-cultured-and-better-traveled-and-probably-taller-than-you heroine passes along advice and recommendations.

So while I commend Ms. Paltrow on her choice of web designers, I'm curious: Who appointed her the arbiter of chic-living, girly girliness? Since when do we consider her anything more than a right-minded thespian? To see if it was just me, I ran Goop by a few female friends who amble along the same cobblestone streets as the gal herself. Their reactions upon hearing the words "Gwyneth Paltrow" were, verbatim, "stick figure," "that pink Oscars dress" and "talented actress when she puts her mind to it." Note how nobody threw out an association like "good-taste icon" or "hip, uber-cultured girlfriend about town." 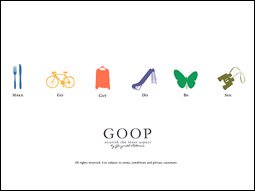 Goop is the paragon of aesthetic simplicity.
Gwyneth apparently fancies herself both of those things and more, and has thus anointed Goop as the official clearinghouse for her deepest ruminations on mortality and cute sandals. Travel like she does! Eat like she does! Regard your children as "little radios picking up [your] frequency" like she does! It's all so, so precious.

Most everything on Goop looks and sounds very, very expensive, which can't be the most intelligent approach in these end-of-days economic times. That's kind of a moot point, though, as a healthy percentage of the recommendations are so bland as to be entirely useless. Take this one, about one of GP's favorite joints in France: "From superchef Jean-Georges, this restaurant serves Asian/nouvelle French cuisine done wonderfully and served in a clean, contemporary space." Doesn't exactly inspire you to break out the spork and bouillon bib, does it?

Maybe Goop will resonate with Gwyneth fans or NYC prep schoolers, but I can't imagine anybody else paying much attention. I'll leave you, then, with an analogy: Gwyneth Paltrow, cultural trendmistress = Paris Hilton, actress. Be afraid. Be very afraid.