Media Reviews for Media People: The Case for Archives

As a self-consumed member of the media, I hold that my opinions and experiences are singularly important. What I feel, think and believe can (and should) move mountains and topple fascist mastheads. In that context, I present to you my sure-shot pick for the next "Avatar"-huge online audience-pleaser: Sites that bask in the warm glow of their archival content. 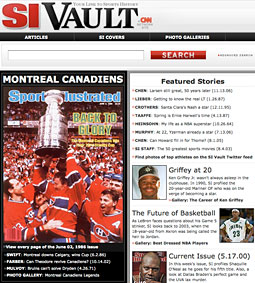 SI Vault
Mind you, I don't know if any of these sites generate more than 12 visitors per day. I don't know if their minders have the resources or will to focus their attention on anything other than click-generation via "Best Mustaches in Hockey/Metal/Porn/Municipal Policing" slideshows, or if what I'm suggesting -- that every online editorial entity build mini-sites around its gently used content -- is technologically, economically or copyright-ily viable.

I just know that during my idle minutes, I'm less inclined to survey 18 morning-after takes on what the nice government person said on "Meet the Press" than to hunt down stories, music or video that I dig. Hence, sites with gobs of archived material are awesome, as are self-invented trends.

I arrived at this earth-shattering conclusion on Monday at precisely 12:08 p.m. EST. Hoping to forestall lunch for another few minutes, I clicked on a link sent over by a pal. As I read the story, my speakers pulsed with some fine free tunes from a long-ago concert. The realization descended on me like water from an untamed shower spigot: Could everything old be new again? And then, is there any leftover spaghetti?

The two sites I'd been perusing stand as the best examples of my make-believe trend. Wolfgang's Vault serves up a host of previously unavailable live music from the Bill Graham Presents concert archives, while Sports Illustrated's SI Vault unearths material from the issues of yesteryear. Combined, they're enough to make a guy wish for a lengthy period of mandatory bed rest.

Wolfgang gets it right
Wolfgang's Vault gets the music-matters thing right. Many online music critics are so keen to assert the infallibility of their opinions that they come across as humorless and thus primo candidates for a throat-punching. The folks at Wolfgang's, by contrast, are like the dude next to you at the big show, offering warm words and kind bud. Their weekly newsletter describes and enthuses over the newly added music, and from there the listener drives his own experience. That kind of trust in, and respect for, the visitor is rare indeed.

The one concern I have is that the Wolfgang's Vault model isn't replicable. No other entity, as far as I can tell, has access to the greatest 200 minutes of live music in the history of western civilization. I don't know who, if anyone, can create an online experience that similarly caters to hard-core music or video prospectors. Maybe the sports leagues could pull it off? To date, only MLB.com seems interested in providing historic video on demand. To be fair, doing so would require a ton of time and effort.

As for the SI Vault, it scores on two different fronts. Though some of the content I'm eager to revisit isn't available, most of it is. SI makes the effort to put it all in context, too, curating the old material in a way that resonates with the news of the day. On Wednesday afternoon, for example, the SI Vault landing page featured old SI material on Ken Griffey Jr., whose upcoming involuntary retirement ranked among the week's biggest sports stories. 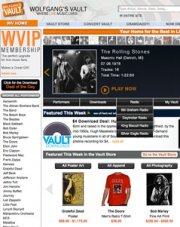 Wolfgang's Vault
What's more, as opposed to the Wolfgang model, any magazine with a history can devise a SI Vault-like thingie of its own. How lovely would it be if, say, GQ's website didn't make it a Sisyphean ordeal to find that one Axl Rose feature from a few years back? Upon visiting the site, I got my hopes up, courtesy of the front-page-of-the-site link to the mag's "25 best vintage stories." Unfortunately, I misread the darn thing and ended up spending $245 on pre-shredded jeans. Anyway, since I assume you'd like me to save you the 12 minutes it took to find the Axl piece, here it is. Get your archives in order, men and women of magazines.

Concerns for publishers
I have concerns, of course. Most crucially for publishers, I don't know how you make money off this stuff. Wolfgang's Vault sells selected shows and overpriced "vintage" regalia, while the SI Vault links to a sister site that half-assedly pushes medium-quality blowups of old mag covers. I can't imagine that either does bang-up business.

Both vaults run their share of ads, however, and they could prove a rare exception to the nobody-clicks-on-nothin' mantra. I actively seek out the content on these sites. Once I happen upon something I like, I spend a lot of time with it (those Gary Smith SI features can't be read in a single 85-second burst like so much else on the web). If I'm reading a long-form story, maybe I'd be lured by an ad for a topically simpatico movie or an upcoming pay-per-view event. If I'm listening to an old concert, maybe I'd be inclined to click on links to a new album or upcoming tour. Or maybe not. I'm a little schizo in my media consumption.

Of course, if Wolfgang or SI entombed their content behind a pay wall, that would mark the end of my visits. This isn't to say that the material isn't worth paying for -- much of it is -- so much as that I'm cheap. I have plenty of music in my iTunes -- 51 days' worth, according to the handy guide at the bottom of the screen -- and there are plenty of places for me to read about sports. When it comes down to paying for something or not, I land on the "not" side of the argument, as do many other spoiled children of the web accustomed to getting everything gratis.

In any event, we have a will-consumers-ante-up? case study in the making. Rolling Stone recently made its archives a pay-for-play operation, thus depriving me of the ability to revisit the mag's "Eddie Vedder smiled in his high-school yearbook photo, so his tortured-artiste image might not be genuine" nadir. Let's see how well this goes over before arriving at any conclusions.

Anyway, whatever concerns exist about their commercial viability, Wolfgang's Vault and the SI Vault rank among my five favorite destinations on the web. And thus, extrapolating massively, sites that similarly prioritize their old content are the next big thing, because I say they are. If you don't agree with me, you're wrong.