For Dobrow, It's Just Another Stupid USA Weekend

There is precisely one reason to read a newspaper magazine supplement: because it's there.

Outside one's living room, these titles are as superfluous as a hood ornament. If Parade or USA Weekend, with their gentle celeb features and "Relationtips," were placed on a dentist's waiting-room table alongside back issues of Newsweek, would anybody peruse them? If Relish were displayed next to Bon App�tit, Everyday Food, Food Network Magazine and other standalone food magazines, would anybody clip-n-save its recipes for taco bread and cheeseburger consomm�? Of course not. 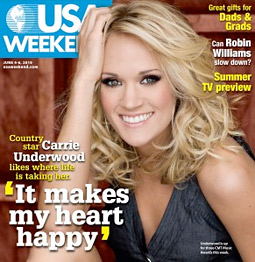 But as a freebie, pressed up tight against the Best Buy circular in the smudgy womb of the newspaper? Them's good mindless weekend reading! Pass the grape jelly! Whoo!

While the Gannett-published USA Weekend ranks as the second-most widely circulated of the superfluo-zines, it easily outstrips the others in terms of raging, unchecked dumbness. Don't be thrown off-track by its section titles, which tack "-Smart" onto the end of many a poor, defenseless word ("ThinkSmart," "SaveSmart," "HealthSmart") -- USA Weekend packs the intellectual wallop of a shampoo bottle.

It regularly runs headlines like "Reaching your goal is something you'll never forget" and "Want to be happy? Have a conversation." Its "Who's News" celebrity questions read like they're written by publicists ("Will we be seeing more of the Food Network's Marcela Valladolid, who has the bubbly personality of Rachael Ray?"). Its highest-aspiring sidebar tenant is a list of celebrity birthdays (Dul� Hill and Frankie Valli share May 3 -- don't tell me that's a coincidence).

Some might say "Larry, that's the whole point, to convey information with broad appeal in a manner easily digested by the anesthetized Sunday masses. You're biased against stupid people! You're an anti-stupid-ite!" To that, I can only respond, "Yeah, pretty much," and that USA Weekend could easily upgrade its content without scaring anyone off. It could, for instance, address broad current-event-related topics (say, the environment or education). Instead of health tips useful only to the chronically stupid and under-insured, it could survey the symptoms associated with Lyme disease or gout. 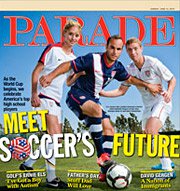 Like Parade attempts to do. Granted, comparing the intellectual heft of Parade and USA Weekend is like comparing the nutritional moxie of a Big Mac and a Ho Ho, but at least Parade works up a sweat every so often.

It might share USA Weekend's preoccupation with vapid celebrity, but it always adds a topical twist (like the current issue's feature on golfer Ernie Els' autistic son). Indeed, its content usually boasts some half-timely hook, whether a gift guide in advance of Mother's Day or a soccer feature timed to coincide with the World Cup tourney. USA Weekend, on the other hand, has not been familiarized with the modern contrivance of a "calendar."

The food-first Relish similarly keeps things simple -- but in this instance, that's the smart call. Why? Because time-pressed parents don't want to create culinary masterpieces; they just want to feed their families in a way that's tasty and somewhat nutritious. Thus Relish can get away with lapses of common sense where other newspaper magazine supplements can't. So long as the recipes deliver -- and the mag offers 10-15 per month -- all the editorial silliness, like the itsy-bitsy photos or the aimless "Cook-cab-u-lary," is easily forgiven. 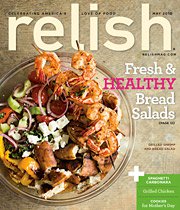 Regardless of whether you view the content in Relish, Parade or USA Weekend as filler, simpleton bait or kindling, however, the newspaper magazines have their charms as an advertising vehicle.

Perhaps this speaks more to my own unfortunate impulsiveness, but I can't resist the lure of flashy tchotchkes marketed via the immediate-gratification miracle that is the direct-response ad.

I don't own a dog, yet the one-pager for the Bark Off "ultrasonic training aid" had me simultaneously reaching for my wallet and lapsing into a state of utter self-contempt. I've started daydreaming about a Malaria-free summer courtesy of the hands-free bug screen. I've already told The Missus that I want a "Today, Tomorrow and Always" diamond ring for my upcoming birthday -- well, either that or a sonar-equipped hover board. The point is: These ads excite the imagination.

The apparent product placement does not. Relish's "Marketplace" feature looks like an ad (that's not identified as such), right down to its trademark notations (for the Revolution� tomato planter) and product codes. Or take the following blurb from the May issue, which proudly thumbs its nose at traditional conventions of punctuation: "The grill calls for bold flavors, that's why we love the Cajun and Caribbean Jerk blends in McCormick new line of seasonings called Perfect Pinch. They're exclusively herbs and spices with no fillers added." Maybe it's pure editorial judgment at play, but it's enough to make a reader wonder.

For now, USA Weekend, Parade and Relish seem to be doing well enough, with ad pages and dollars up in the first quarter of 2010 against the year-ago period. The advertising play has even been alluring enough recently to spur plans for a new entrant to the newspaper-supplement category: Dash, a food title from the Parade folks and Conde Nast.

At the same time, many of the newspapers in which they arrive are trending downward in paid circulation. What happens as these papers' audiences shrink?

Even as the magazine supplements attempt to lure readers to their websites, they won't have a real second life online. No Parade reader will be so tantalized by the Father's Day gift guide that he'll log on to the site come the next holiday. Maybe Relish could snare web visitors by omitting pivotal information from its recipes ("to learn the final ingredient of this pizza sandwich, visit RelishMag.com!"), but they'd piss off their budding gourmands by doing so. It ain't worth it.

In short, if newspapers ever meet their maker, the mag supplements are going with them.