Media Reviews for Media People: The New Yorker
READ THIS NEXT
Billie Eilish stars in a gorgeous rallying cry for the ‘generation that lives online’

I canceled my New Yorker subscription some time ago, mostly because the metric tonnage of unread issues threatened to topple the shelf behind my toilet. 'Twas a necessary move -- I'd been fast-tracked for a "Hoarders" intervention -- but to this day I lament the material I consigned to the recycling bin. Either the old New Yorkers or the Baldwin Bros. figurines had to go; I chose with my head and with my heart. 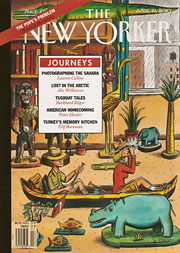 The April 19 issue of The New Yorker.
Do I miss the cocktail-party-worthy nuggets conveyed in each densely packed issue ("Seymour Hersh says our government is doing something untoward somewhere, probably in Asia but maybe in Africa"; "Sasha Frere-Jones doubts that Lady Gaga really has a shlong"; etc.)? Absolutely. Did I forfeit whatever claim I have to literary literacy when I liberated myself of 6,450 man-hours worth of Joyce Carol Oates yarns? Sort of. But I preserved my sanity in the process. Unless you're chronically underemployed or really, really devoted, subscribing to The New Yorker is temporally impractical.

This week, however, I found myself stuck in neutral for a spell -- happily, this involved neither a physician's waiting room nor wayward plumes of volcanic ash -- and happened upon the April 19 issue of The New Yorker. I needed a few hours of good company. Would The New Yorker be up to the task, or would it be in death-by-Robert-Bly mode?

Perusing the April 19 issue didn't feel like homework, as occasionally it did when the back issues piled up. At the same time, nothing in it sparked my interest or curiosity, or whatever a high-minded journal is supposed to spark nowadays. I admired the issue more than I enjoyed it.

Why was that? I think it's because The New Yorker remains the same magazine it was 10 years ago, which underlines the impossible position in which the title finds itself. If The New Yorker affects any kind of substantial change -- a pop-cultural lobotomy or a graphic facelift would be the obvious choices -- its loyalists will revolt. If it doesn't change, its readership will soon vaporize. Let's face it: Few members of the internet generation boast either the will or the attention span to plow through 8,000 word exegeses on Hutong economics.

That's a problem. What is The New Yorker's end game? In a world where Slate and Salon flood the internet every day with 600 terabytes of commentary aimed at almost-intelligent people, how can The New Yorker maintain its balance atop Mount Smartyhead?

It could start by revamping its criticism, which is no longer unique or especially interesting. Far too many of the essays lapse into "Look, ma! I am WRITING! No hands!" mode. A chef is described as "one of a cohort of pastry-makers gone savory," while one group's new piece will "no doubt further italicize their credo: theatre not only shows our inner selves at work; it makes us better for having experienced it. Out loud." Congrats to the writers on hitting the pretentious/nonsensical perfecta. The our-style-guide-is-smarter-than-yours diaeresis marks -- "pre?minent," "re?lection" -- similarly prompt an outpouring of nerd disdain.

Then there are the cartoons, as much a New Yorker staple as The Economist's 2.5-point fonts or Van Halen's awesomeness. This may be a generational thing, but the venerable cartoons alternately confuse and sadden me. They date back to an era before humor was actually funny, delighting in the titanic drollness of a pilot telling passengers to disable their e-book readers before landing and baseball players tweeting mid-at-bat. Hey-o! The sporadic doodles may pass the tickle-me-Wallace-Shawn threshold, but they don't add context to the features and fiction they adorn.

I just dashed off a New Yorker-y doodle myself, in fact. It looks just like the one on Page 111, which appears to depict an arrow mating with a rhombus. It'd be perfect for a typically off-kilter New Yorker feature on spear fishing, Diana Krall or drive-thru nunneries. Now, where's my check?

Yet if one assesses any issue of The New Yorker on an item-by-item basis, it still boasts some of the crispest, least linear magazine journalism around. Just check out the issue's revelatory reporting on an Arctic exploration via balloon gone astray, or take a look at the "Personal History" on a writer's move from China to Nowhere, Colorado, which flowers into a meditation on the nature of the American personality. Then there are the consistently involving "Talk of the Town" featurettes up front, which jump deftly between brows high (the sexual-abuse crisis in the Catholic Church, economic barometer predicto-explanations) and middle (the Overseas Press Club's Tchotchke Night, drop-ins on Christopher Walken and Peter Wolf).

In short, if you stick to "Talk of the Town" and the feature well, The New Yorker remains as devourable as ever. I still wonder if it's fighting an unwinnable battle.

That I can't find the will to plow through it every week says more about me than about the mag itself. But there are many more lowbrow Larrys out there than high-minded Henriettas. Just because something is decent and worthy doesn't give it license to exist in perpetuity in its current incarnation. This won't end well.

In any event, I've had my fill of highbrow discourse for the week. If you'll excuse me, I'm off now to watch some Benny Hill clips and restore my intellectual equanimity.