Trump doesn't defend Roseanne Barr, but looks for his own apology from ABC | Ad Age
Skip to main content

Trump doesn't defend Roseanne Barr, but looks for his own apology from ABC 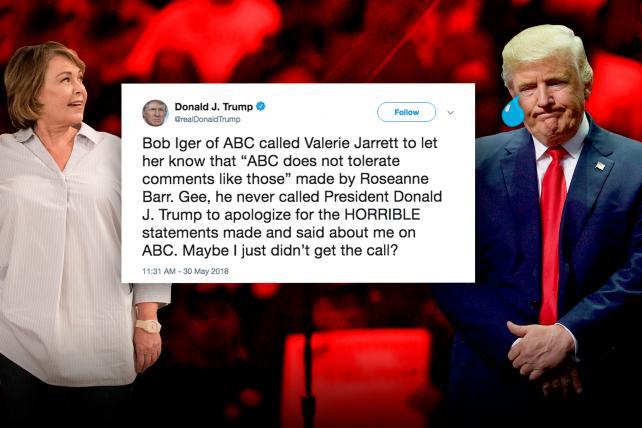 President Donald Trump isn't defending Roseanne Barr after the comedian's racist Twitter commentary lead to the cancellation of her namesake ABC sitcom. Instead, Trump is looking for his own apology from ABC.

"Bob Iger of ABC called Valerie Jarrett to let her know that "ABC does not tolerate comments like those" made by Roseanne Barr," Trump wrote Wednesday on Twitter. "Gee, he never called President Donald J. Trump to apologize for the HORRIBLE statements made and said about me on ABC. Maybe I just didn't get the call?"

It was a rather subdued response from the president, who personally called Barr to congratulate her when her show's revival debuted in March to more than 18 million viewers. But Trump got a lot of heat last summer for saying white nationalist protestors in Charlottesvilla, Virginia, included "very fine people." Bashing the media is a far safer play than defending Barr.

While Trump didn't defend Barr, however, he didn't criticize what she said, either.

In the early hours of Tuesday morning, Barr tweeted that former Obama White House advisor Valerie Jarrett was the child of the Muslim Brotherhood and "Planet of the Apes." The remark, part of a Twitter conversation on another subject, was swiftly condemned by other Twitter users as racist.

By early afternoon, ABC issued a brief statement saying the network condemns Barr's comments and would cancel "Roseanne" as a result.

Jimmy Kimmel, the host of ABC's "Jimmy Kimmel Live" as well as the recent ABC upfronts pitch to advertisers where "Roseanne" was front and center, responded to Trump's tweet by suggesting the president may have been out golfing when Iger called.

Maybe you were out playing golf? https://t.co/WjQLZeFlmH

Barr, for her part, returned to Twitter Wednesday to ask supporters not to defend her and to blame her tweet partly on Ambien. The drug's maker answered that with a statement that Ambien's side effects are not known to include racism.